The almost 300 laws that make up Hammurabi’s Code show us what daily life was like more than 3,500 years ago. 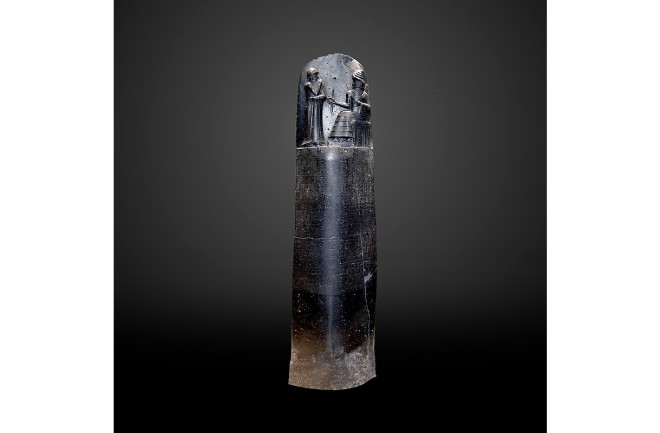 Great rulers throughout history have built monuments to themselves and their achievements, which were meant to outlast their short lives. From mighty pyramids to monolithic statues, the goal was to make a lasting impression upon future generations. Some rulers wished to impart their might, others to align themselves with the gods. For Hammurabi, king of Babylon, his legacy was the law.

The Code of Hammurabi is inscribed on a stone (or stela) of black basalt more than seven feet tall. Written in cuneiform script, in Akkadian, are laws concerning criminal behavior, family interactions, economic transactions and more. Punishments for each transgression accompany the laws, ranging from monetary fines to death.

Hammurabi’s laws echo some of our legal philosophies today, though filtered through the lens of a society that often looked very different from ours. Slavery was legal, and women and children were assumed to be subservient to adult men.

The stela’s goal was multifold: To lay out the laws of the land clearly for citizens, but also to establish Hammurabi as law-giver and judge even after his death. Fittingly, the laws are accompanied by words and images making clear the divine provenance of his kingship. The top features a bas relief depicting Hammurabi receiving the gods’ blessing, below which are the laws themselves, and a prologue and epilogue cataloging the king’s achievements and divine right to rule.

The collection of 282 laws sits today in the Louvre in Paris, its dictates preserved for nearly four thousand years. The stela itself was discovered in 1901 by French archaeologists, and it’s one of the oldest examples of writing of significant length ever found. To archaeologists today, the collection of laws is a treasure trove, revealing not only the existence of an ancient legal system, but examples of labor relations, family life, societal organization, and more.

A Code Written in Stone

The massive stone and its laws were placed in a public temple, either in Babylon or the ancient city of Sippar, both in modern-day Iraq, sometime near the end of the king’s reign in the 18th century B.C.E. The prominent placement meant the laws were clearly visible, and the epilogue advises anyone with a legal dispute to bring it before the stela itself and and consider their case under its watchful gaze:

“Let the oppressed, who has a case at law, come and stand before this my image as king of righteousness; let him read the inscription, and understand my precious words: the inscription will explain his case to him; he will find out what is just, and his heart will be glad.”

The laws themselves are among the earliest examples of writing of any length discovered, and were copied as writing exercises by scribes for over a thousand years. This meant the laws themselves were distributed and read widely, and would go on to influence legal thinking for millennia to come. This doesn’t necessarily mean that Hammurabi was the originator of all, or even most, of the laws he laid down. Other written examples of ancient law, such as the Sumerian Code of Ur-Nammu and the Laws of Eshnunna, predate the Code of Hammurabi by several hundred years, and include many similarities. Neither is as comprehensive, however.

Hammurabi’s laws cover a great deal of legal territory, and scholars believe they were likely drawn from real cases that the king or his judges presided over. Examples include laws governing crimes such as theft, murder and adultery, as well as familial interactions like marriage, divorce and inheritance. There are laws setting out wages for laborers, and recompense for fires and other damages. Some of the laws look familiar to us today, while others feel alien. For example, the 135th law details what should happen if a husband is taken as a prisoner of war and his wife leaves his house. (It’s OK if there’s no food.)

However, there remains some debate today over whether the laws were meant to be binding, or simply used as precedents for legal cases. We also have little evidence of how closely the laws were followed in Hammurabi’s time. Scholars do agree, though, that Mesopotamia had a formalized justice system, which would have necessarily depended on laws such as these.

Along with the laws, the Code of Hammurabi also prescribes punishments for breaking them. Many feel harsh to us today: Death is a common sentence, whether for murder, robbery or failing to pay a mercenary. In some special cases, even the method of death is specified. Incest was punishable by burning, adulterous murder by impaling. Cutting off hands was another popular punishment if, for example, a son struck his father, or a field hand stole the crops they were tending. These punishments also include perhaps the most well-known of Hammurabi’s laws: the infamous “eye for an eye” dictate.

But such even-handed justice was not always the case. The punishments vary significantly in relation to the status of the criminal and the victim. If a physician accidentally kills a free man, for instance, the doctor’s hands will be cut off. If a physician kills a slave, however, they need only replace the slave. Similarly, if a free-born man strikes someone of equal rank, he must pay a penalty in gold. But if a slave strikes a free-born man, the slave’s ear must be cut off.

Women, too, dealt with more restrictive laws. If a woman neglected and left her husband, she might be cast into the water; if a husband neglected his wife, his only punishment was that she could leave him. Men were also allowed to take another wife if their first wife bore them no children (though the law did stipulate that he must continue to care for her). But some protections for women did exist. If a wife became sick, the husband was forbidden from leaving her, for example; and if a man divorced his wife, she had rights to some of his property in some cases.

Other laws established fair wages and terms for conducting business in ancient Mesopotamia. Prices for building houses, renting farm animals, hiring laborers, building boats, and more are laid out clearly. Punishments for poor work are also detailed — if a house should fall down and kill its owner, the builder would be killed, too. Or if a boat should leak, the shipwright must fix it at their own cost.

The Code of Hammurabi’s influence extends beyond Mesopotamia. The Bible contains language nearly identical to the Code’s policy of in-kind punishment, referencing “eye for eye, tooth for tooth,” several times. And some scholars have argued that the Biblical Covenant Code, which lays out many laws for Christians and Jews, stems largely from the Code of Hammurabi.

Elements of legal thinking present in Hammurabi’s time still exist today. The Code assumes a person’s innocence, for example, pending evidence to the contrary. The Mesopotamian legal system gave both accused and accuser a chance to state their cases before a judge. The laws even accounted for poor legal judgments — the fifth law states that if a judge is found to have erred he must pay a fine and be removed from the bench. Forever.

Beyond insights into early jurisprudence, the collection of laws also offers a detailed look into an ancient society. We learn that not only did the Mesopotamians possess a legal system, but also a system of taxation. Marriage was bound by laws concerning dowries, properties, and the birth of children. Prostitution and slavery were both legal. Men could be conscripted into the king’s army to fight his battles. Wealthier landholders would commonly hire laborers for their fields, or rent out their oxen and donkeys for work.

We also see how rigidly segmented Mesopotamian society was. Slaves were at the bottom, but could be freed in some cases. Men born free had the most rights, while women were subject to additional restrictions on what they could own and what freedoms they had.

The Code of Hammurabi offers a glimpse into a society that is both similar to and distinct from ours. What ultimately unites us and the ancient Mesopotamians, though, is a recognition that functioning societies require a set of agreed-upon laws to function. A robust legal system is a prerequisite for humans to coexist near one another — something of which King Hammurabi was evidently keenly aware.