How Tardigrades Saved the Enterprise

If you trekked into a theater this week to see the latest installment of Star Trek, you saw a damaged starship Enterprise fall out of the sky like a meteor looming over future San Fransisco. For Captain Kirk, unless someone fixes it, the ship’s crippled warp core means a doomed crew. He could have used an army of Tardigrades. 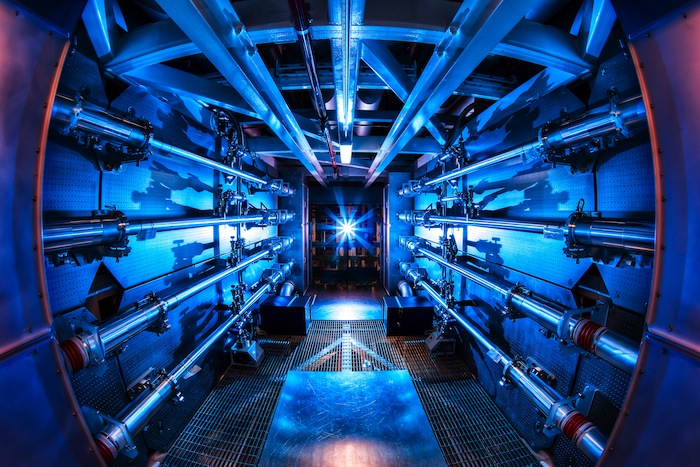 Late in Star Trek Into Darkness, the crew of the Enterprise successfully fends off an attack from the militarized Killer-prise, but a critically damaged warp core sends them plummeting towards Earth. Now in the clutches of gravity, the only way to survive a death-by-reentry means realigning the core (an actual place). Kirk takes it upon himself. Braving a radiation bath, Kirk sacrifices himself to save his crew. Within minutes after entering the core, Kirk dies from a lethal dose of radiation in a clever role-reversal from previous Star Trek canon.

Radiation has an invisible lethality, but where it comes from and just how much matters. Just how much radiation did Kirk endure, and is there any life form that could have done a better job? Differences in radiation exposure and resistance can mean the difference between a handshake from Bones and a tearful Vulcan salute.

In classic Star Trek canon, the Enterprise’s core is a warp core, able to propel the ship at superluminal—faster than light—speeds. To meet the energy demands, the core takes advantage of matter-antimatter annihilations. As Einstein laid out in his famous equation E=mc^2, even a small amount of matter contains a gargantuan amount of energy. Though this equation also dictates that to go faster than light you would need infinite energy—making superluminal travel impossible—Star Trek gets around this problem by using the energy made in the warp core to instead bend space around the ship. This bending of space-time avoids the perils of time dilation. Without being able to bend space, traveling at or over light speed would get you where you needed to go, but the rest of the universe might age 40 years soon after you say “Engage.” A warp drive is the critical component for cosmic commuting, and it might actually be possible to make.

If the warp drive in the Enterprise is using matter-antimatter explosions to power it, the chamber housing the drive likely is filled with the remnants of the destruction—sub-nuclear particles like mesons and electromagnetic radiation in the form of gamma rays. Unless he had the good fortune of Bruce Banner, Kirk’s heavy exposure to gamma rays means that he might as well have entered the core wearing a red Star Fleet shirt.

Unlike lower energy radiation that is put out by cell phones and microwaves, gamma radiation is at the very high end of the electromagnetic spectrum. In fact, the high frequency photons that make up gamma rays have enough energy to bump electrons, protons, and neutrons in your body’s atoms out of place. This process of ionizing your body’s molecular soup is what makes high-energy radiation so dangerous. It’s a deadly game of Red Rover where high-energy radiation slams into your line of molecules, liberating some from the chain. Knocking enough electrons or even whole atoms out of place in the body can cause everything from superficial skin burns and lesions to cancer.

You encounter ionizing radiation all the time—from chest x-rays, eyeglasses (containing Thorium), and even from space—but most of us never get a single massive exposure like Kirk does in Star Trek Into Darkness. We absorb about 0.01 Grays (a measure of energy absorbed per kilogram of material, abbreviated Gy) from a CT head scan, but a singular exposure to 10 Gy would cause widespread cell death and mutation, with your demise two weeks away.

But in the film, mere minutes pass between Kirk entering the warp core and giving Spock a final Vulcan salute. 30 Gy—equivalent to receiving 3,000 CT scans at once or standing next to the failed Chernobyl core for 5 minutes—would be enough radiation to kill you within three days of exposure. There isn’t any data to say how much radiation could kill you in minutes because radiation-death is a slow process. Once enough of your atoms and molecules are knocked out of place, it is only a matter of time before your insides stumble around, irradiated into madness, towards destruction.

So we can assume that whatever Kirk’s ultimate exposure was, it must have been higher than 30 Gy. It would explain his fear and confusion near the end, as those are common symptoms of radiation sickness. Though heroic, Kirk’s final act was in ignorance of a powerful ally who could have saved the Enterprise unharmed—the humble water bear.

The Trouble with Tardigrades

Water bears, or Tardigrades, are tiny extremophiles able to survive in the harshest conditions. They can handle a decade of complete dehydration, the pressures at the bottom of the Mariana trench, and temperatures scarcely above absolute zero. Maybe most impressively, the millimeter-long creatures can withstand thousands of times more radiation than most other mammals and insects—even cockroaches.

Able to weather a flood of high-energy particles, the water bear can take 5000 Gys before going the way of Captain Kirk. The little animals could take a leisurely stroll around Chernobyl without feeling a thing. With over a thousand times our own radioresistance, the water bear’s ability to efficiently repair its DNA following exposure should make it the latest addition to Star Fleet.

Of course, to repair the warp core and save the Enterprise, Kirk would need a sentient army of a trillion water bears. At those numbers, even though the little buggers could do it without harm, Spock may object, as the needs of the many would outweigh the needs of the few. And even if the water bear army fails, the hardy critters would still outlive the Enterprise’s crew. One group of water bears survived the vacuum of space, and deadly solar radiation, for ten straight days before returning to Earth unharmed.

--- Image credit: The preamplifiers of the National Ignition Facility