How Scientists Are Planning to Grow Food on Other Planets

Growing plants off-world is an essential, and increasingly likely, part of exploring the cosmos. 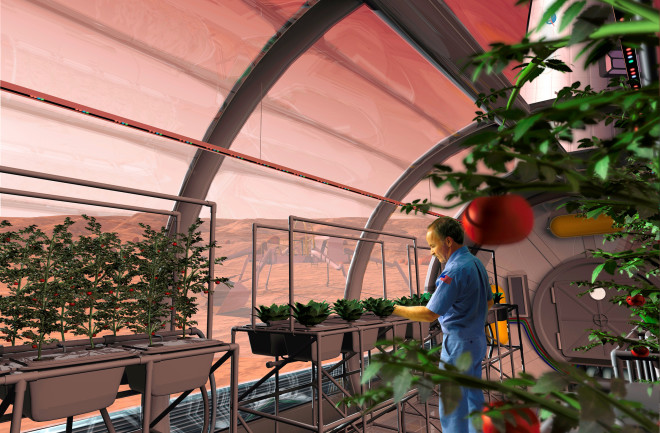 Cultivating food on an alien world — shown above in an artist’s rendering of a greenhouse on Mars — has long been a focus of NASA. In the future, genetic engineering could play a key role. (Credit: NASA)

On the northern slope of Hawaii’s Mauna Loa volcano, 8,000 feet above sea level, biology Ph.D. student Cyprien Verseux spent a year inside a simulated Mars habitat learning how to cultivate lettuce. Verseux was one of six ersatz astronauts participating in HI-SEAS IV, a 2015 University of Hawai‘i experiment. The group was part of a study on the psychological hardships of space exploration, examining team cohesion in extreme isolation.

Verseux’s agricultural project, an extension of his graduate research, was technically unrelated to the HI-SEAS mission. But it may prove no less crucial to interplanetary travel. If you want to support humans over the long term, it’s going to be very difficult and expensive to send into space all the food and oxygen people need, he explains. “The idea would be to produce what is needed on-site from what you find there.”

Verseux’s special lettuce may end up being just a small step toward self-sufficiency on Mars. But together with other advances in astrobotany on Earth and aboard the orbiting International Space Station (ISS), Verseux’s pioneering research promises to propel the giant leap required for astronauts to explore realms even more exotic than Mauna Loa.

The idea of extraterrestrial agriculture is older than the first rockets. In the 1920s, while developing the mathematics of spaceship propulsion, the Soviet aeronautical theorist Konstantin Tsiolkovsky conceived of sealed greenhouses in space where humans and plants could support each other. Humans would provide the carbon dioxide, and plants would supply the food and oxygen, replicating Earth in microcosm.

By the 1950s, the U.S. Air Force and NASA began testing algae-based life support systems for future space explorers. The Soviets went further in the 1970s and ’80s by flying crops such as onion and flax to their earliest space stations, demonstrating that live plants could survive in microgravity. Simultaneously, they built isolated, enclosed habitats on Earth — versions of Tsiolkovsky’s greenhouses — to study how plants could provide food and process human waste without external intervention.

NASA has since regained the lead in such research and also redefined its trajectory. “We’ve moved away from a concept of complete bioregeneration to more of the somewhat Earth-dependent approach,” says NASA Kennedy Space Center astrobotanist Gioia Massa, who runs agricultural experiments on the ISS. For now, NASA sends most of the astronauts’ food from Earth and recycles waste with machines, but the space agency still uses biology “where it makes sense.”

While that may sound like a retreat, it’s actually a strategy for long-term advancement based on lessons learned from once moving too quickly. (Those early algae experiments from the ’50s? A flop.) Massa’s most noted success has been a space gardening experiment called Veggie — short for Vegetable Production System — which has been growing crops from seed on the ISS since 2014. Veggie is deliberately simple and user-friendly, housed in a unit the size of a mini-fridge and designed for crew interaction. Astronauts load it up with grow bags, which contain seeds suspended in a baked clay substrate impregnated with special fertilizer. Then the makeshift gardeners do their best to nurture growth by controlling colored LEDs and electric fans.

One of the greatest challenges is irrigation. Water behaves counterintuitively in microgravity and its movement is much tougher to predict, so droplets can just as easily drown the roots as leave them parched. Although the problem remains unresolved, the ISS crew has managed to grow a broad range of pick-and-eat vegetables including romaine lettuce, Chinese cabbage and kale. The yield is minimal, providing the astronauts with just a taste of fresh produce, but even a mere leaf of lettuce per month can make a big difference after weeks of blander fare.

“Over time, people get kind of tired of eating the same thing,” Massa explains. “Most people who go to space lose weight.” These crops can help keep up enthusiasm for eating.

Benefits of a Balanced Diet

The physical act of gardening also may have important psychological benefits. “Growing plants might make astronauts happier,” says Massa. You can see what she means when you watch a video of astronaut Scott Kelly enthusiastically making a bouquet of space-grown zinnias.

And while improving crew contentment is no small matter, a bigger version of Veggie also may help overcome significant physiological hurdles to long-term spaceflight. Nutrition is a major concern. Vitamins degrade over time and would lose potency during a three-year round-trip mission to Mars. Greens could provide the diet supplement astronauts need, even if most of their calories still come from prepackaged foods.

Of course, one tomato per week won’t do the trick. Even in the short term, space agriculture needs to improve. Fortunately, astronauts already have many of the needed tools at their disposal. To study microbiology and genetics in microgravity, NASA has outfitted the ISS with several platforms for growing plant tissue in petri dishes, and a new Advanced Plant Habitat allows Massa and her colleagues to monitor the development of full-size crops with more than 180 controls and sensors, effectively providing her with a remote lab-in-a-box. Together, these systems can take NASA beyond mere fine-tuning of lighting and irrigation.

More futuristic research involves genetic engineering. For instance, plants in low gravity might not need so much lignin, the inedible substance that gives stems their rigidity. NASA scientists are studying whether altering lignin production might help humans absorb more nutrients from their veggies or make it easier to deal with plant waste in space.

Yet even if genetically modifying plants for space may be necessary, it probably won’t be sufficient. Looking to the long term, Massa remains concerned about all the stuff that will still have to come from Earth to keep space plants healthy. “We don’t want to be launching what amounts to space dirt,” she says. Even without complete bioregeneration, Tsiolkovsky-style, she believes that “we need to look at all of these potential areas of in-situ resource utilization.” If you’re growing on Mars, your supply chain should be mostly Martian.

And luckily, the latest research suggests it very well could be.

In 2015, while Verseux was on Mauna Loa, his special lettuce lived on nutrients made exclusively by a type of microbe known as cyanobacteria, which needs only light, water, air and minimal nutrients to survive. At the same time, samples of cyanobacteria were orbiting Earth on the outer surface of the ISS. They were there with several other kinds of microbes as part of the Biology and Mars Experiment (BIOMEX), administered by the German Aerospace Center and collaborators.

The primary objective was to learn about the limits of life by subjecting organisms to 16 months of orbital radiation. Verseux and Daniela Billi, a University of Rome astrobiologist and botanist, and Verseux’s graduate research adviser, used the opportunity to learn about the viability of cyanobacteria for Martian agriculture, as the Red Planet endures similarly harsh radiation. What, for example, would happen on Mars if the cyanobacteria were accidentally exposed?

Astronauts are already growing greens in space, using the International Space Station’s Advanced Plant Habitat. Above, the crew prepares to measure the height of wheat samples grown in orbit. NASA is slowly learning to produce small amounts of fresh food on the space station. (Credit: NASA)

The results of their research, published in the journal Astrobiology earlier this year, show that the microbes could survive if shielded by regolith (the technical name for the pulverized rock covering many moons and planets). In other words, you’d best not farm cyanobacteria outdoors, but if your greenhouse had a broken window, your microbes would be just fine, protected by the local topsoil. A wayward meteorite wouldn’t lead to starvation after the prepackaged meals stopped arriving from Earth.

Regolith also may be useful in other ways. If you don’t want to ship dirt — literally, earth — to space, the pulverized stone is all you’ve got. But it turns out cyanobacteria have a knack for extracting healthful minerals directly from regolith-like desert rocks here on Earth. In other words, this microbe appears to be just the right organism for “in-situ resource utilization” on Mars — the long-term solution NASA seeks. Once cyanobacteria tap into the local terrain, soaking up melted Martian ice and UV-filtered sunlight, they can theoretically become part of the supply chain in their own right.

Now a postdoctoral fellow at the University of Bremen’s Center of Applied Space Technology and Microgravity, Verseux envisions much more than just lettuce production off-world. Nutrients harvested from cyanobacteria could potentially nourish almost any crop, especially with a little genetic engineering. “Once you’ve grown them, you can use them directly to make oxygen, food, biofuels and a few other things,” he says. “You can produce basically everything humans will need to survive.”

The same research that could make human exploration of Mars possible might also provide scientists with the knowledge to make the excursion worthwhile. “There are a lot of parallels between looking at what resources might be available for use by life and looking at what signatures might be evidence of life,” observes Massa. So by learning what we can grow and how to cultivate it, we’ll ultimately be better prepared to forage for Martian natives doing the same.

Jonathon Keats is a contributing editor at Discover. This story originally appeared in print as "Making a Greener Space."