How Old Are Saturn’s Rings? 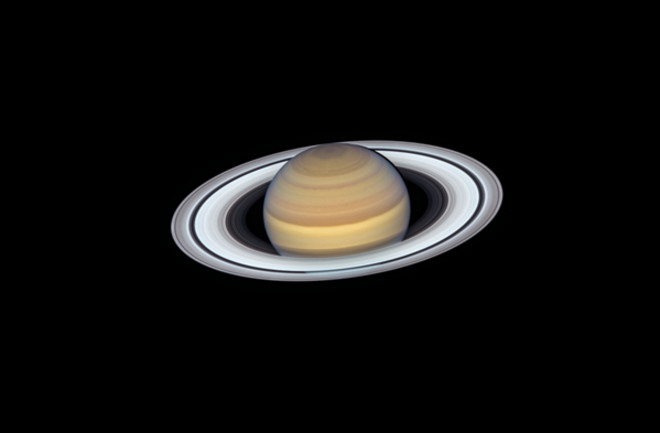 Saturn’s rings are one of the most striking celestial features in our solar system. The Pioneer and Voyager probes gave us our first close-up look. More recently, NASA’s Cassini mission spent more than a decade studying them and the planet they encircle, before ultimately diving between the planet and its rings to take the most detailed measurements to date.

But despite everything we’ve learned about the rings, unanswered questions abound. Chief among them is one of the simplest you can ask: How old are Saturn’s rings?

Age is tricky for astronomers to measure. Researchers have to arrive at this answer indirectly — by measuring other properties, such as mass, color, or composition, and then inferring what those properties mean about the rings’ age.

Those estimates vary wildly. That’s because they depend on the measurements taken and the assumptions made along the way, which is why the debate over whether Saturn’s rings continues to rage.

Here’s what we do know, based on direct measurement: Overall, Saturn’s rings weigh about 33 million trillion pounds (15 million trillion kilograms), or 40 percent the mass of its 250-mile-wide (400 kilometers) moon, Mimas. They are composed of largely pure water ice — about 95 percent ice, with only about 5 percent rock and metals. Over time, they spread out and even rain material down onto Saturn.

To estimate the rings’ age, researchers try to consider what’s happened to change the rings from their original appearance to how they look today. As particles within the rings collide with and gravitationally influence each other, the rings should spread out until they essentially fade away. The rings should also get darker with time, as dust and meteorites fall onto them, affecting their color and brightness.

So, measuring the mass of the rings and the amount of light they reflect should give researchers a good starting point for estimating their age.

Some models place the rings at basically the age of the solar system, stating they likely formed with Saturn and have always been there. After all, scientists have known for decades now that they’re quite massive. To form them after the planet, rather than with it, calculations show the total destruction of a Mimas-sized moon or passing comet is needed — a rare, unlikely event.

On the other hand, the rings are still around. Even given their mass, some researchers expect they would have dissipated away and argue for a young age. And based on observations of color, Saturn’s rings do appear young. They are relatively bright, reflecting much of the light that hits them, so they don’t appear as polluted (dark) as older rings are expected to be. Based on this information, some researchers estimate that the rings are much younger: somewhere in the range of 100,000 to 1 billion years.

But there are some additional concerns. After all, what if the rings are old and formed with the planet, but researchers are simply overestimating how quickly they should dissipate? Or maybe they’re being rejuvenated or renewed so they look young and fresh, despite their age. Newer studies are once again suggesting that the rings are old, and factors previously ignored or unknown may be “cleaning” them to make them look brighter and younger.

So, that’s the heart of the debate these days: Are the rings actually young, or are there processes at play that make them look young? It all depends on how the researchers model solar system processes and the rings’ evolution over time, such as how quickly space dust contaminates the rings and how efficient the processes are that renew them.

It may seem like an unsolvable problem, but astronomers have hope. Southwest Research Institute astronomer Luke Dones, co-author of some of the most recent studies arguing once again for old rings, said in a statement: “It’s not impossible to determine the age of the rings, but to do so we’ll need a future mission to Saturn that spends a long, intense period studying the rings themselves as well as the relationship between them and the gas giant.”