How mushrooms can control the weather. 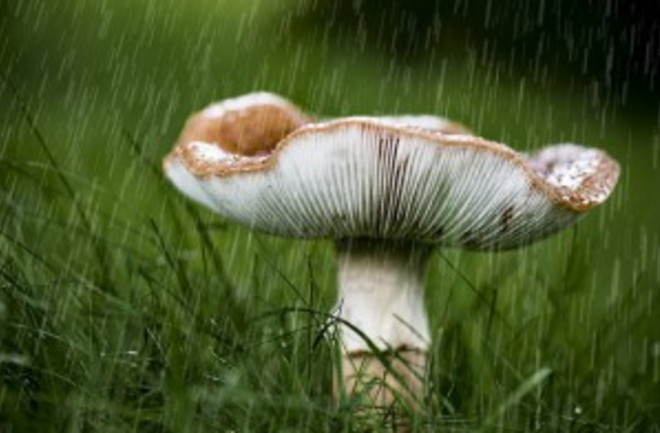 Image: Flickr/Angelbattle brosMushrooms! They're cute, delicious, intoxicating, and might just kill you. And, if none of those abilities makes you crazy for basidiomycetes (the group of fungi that includes mushrooms), maybe this one will: according to these scientists, mushroom spores have the power to make it rain! Apparently, the structure of the spore surface allows water to condense around it. The resulting raindrop could help bring the spores down out of the clouds to the ground where they could germinate. The authors suggest that these spores may actually have a measurable effect on weather patterns. Mushrooms can make it rain--how trippy is that?Mushrooms as Rainmakers: How Spores Act as Nuclei for Raindrops. "Millions of tons of fungal spores are dispersed in the atmosphere every year. These living cells, along with plant spores and pollen grains, may act as nuclei for condensation of water in clouds. Basidiospores released by mushrooms form a significant proportion of these aerosols, particularly above tropical forests. Mushroom spores are discharged from gills by the rapid displacement of a droplet of fluid on the cell surface. This droplet is formed by the condensation of water on the spore surface stimulated by the secretion of mannitol and other hygroscopic sugars. This fluid is carried with the spore during discharge, but evaporates once the spore is airborne. Using environmental electron microscopy, we have demonstrated that droplets reform on spores in humid air. The kinetics of this process suggest that basidiospores are especially effective as nuclei for the formation of large water drops in clouds. Through this mechanism, mushroom spores may promote rainfall in ecosystems that support large populations of ectomycorrhizal and saprotrophic basidiomycetes. Our research heightens interest in the global significance of the fungi and raises additional concerns about the sustainability of forests that depend on heavy precipitation." Related content: The mysterious dancing epidemic of 1518.The antifungal powers of cockroach poop.The wonders of koala poop revealed!