How Much Longer Will the Hubble Space Telescope Last? 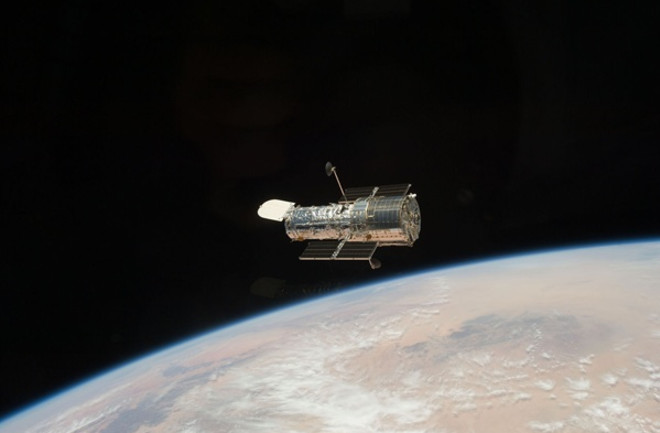 The Hubble Space Telescope appears to float above Earth in this image taken by an Atlantis crewmember in 2009. (Credit: NASA)

NASA’s Hubble Space Telescope (HST) was launched into orbit on the space shuttle Discovery on April 24, 1990. Thanks to its perch above most of Earth’s turbulent atmosphere, the telescope’s relatively modest 2.4-meter mirror has given us an unprecedented window on the universe for nearly 30 years. But just how much longer will Hubble last?

Unless the telescope suffers a catastrophic failure that renders all its instruments unusable or eliminates the telescope’s ability to point at targets, HST will continue operating at least through June 30, 2021. That’s how long NASA has officially funded its operations.

There’s another consideration: HST is not completely above Earth’s atmosphere. It’s in low Earth orbit, which means it still experiences some drag, or friction, from air particles as it circles Earth. HST will eventually experience enough atmospheric drag that it will crash to Earth; this is projected to occur by the mid-2030s, regardless of the telescope’s operational status. But if Hubble gets a boost, perhaps from one of the many private spacecraft currently under development, it could be back in business.

After all, the telescope’s instruments are likely to last longer than to 2030, although it has not been without its hiccups — the most recent of which affected Hubble’s Wide Field Camera 3 in January 2019. And many of the older instruments are not operating at full capacity. Certain parts of their detectors no longer function or must be carefully masked using software to ensure the data they take are accurate. Even with these limitations, however, the telescope is still an invaluable asset for science.

Hubble’s importance isn’t likely to fade any time soon. That’s because NASA’s James Webb Space Telescope (JWST), currently scheduled to launch in 2021, is not a direct successor to Hubble. The two telescopes are actually complementary. Hubble has limited capabilities at near-infrared wavelengths, which is where JWST will really shine. The next-generation space telescope is perfectly poised to study things like forming stars and planets, extremely distant galaxies, and even the atmospheres of exoplanets, which are all best seen in infrared. But Hubble is best suited for observing in the ultraviolet (UV) and optical ranges of the light spectrum. And because Earth’s atmosphere blocks most UV light, Hubble can see things that we can’t from Earth and that won’t be covered by JWST.

So it’s entirely possible that NASA will again extend Hubble’s operations after June 2021, provided the telescope can still point and use at least some of its instruments, even if others fail.

During the final space shuttle mission to service the telescope in 2009, Atlantis crew members gave Hubble a major upgrade during five separate spacewalks. Two new instruments — the Cosmic Origins Spectrograph (COS) and Wide Field Camera 3 (WFC3) — were installed, while the telescope’s existing Space Telescope Imaging Spectrograph (STIS) and the Advanced Camera for Surveys (ACS) were repaired. The mission also replaced the telescope’s batteries, gyroscopes, science computer, guidance sensor and insulation. All this means that Hubble got a renewed lease on life that may well carry it through several more decades.

Currently, NASA plans to use a rocket to perform a controlled deorbit, which will ensure any debris that doesn’t burn up will land in an uninhabited area when HST’s mission is finally complete. The final servicing mission also included the installation of a Soft Capture and Rendezvous System, or SCRS — a ring-shaped docking port to enable future spacecraft (likely robotic) to connect to the telescope and safely deorbit it.

That hasn’t played out so far. “There are no immediate plans for Hubble fixing using Dream Chaser,” says Kimberly Schwandt, a spokesperson for Sierra Nevada. “But it’s a capability and we are open to any discussions on uses for the vehicle.”

Ultimately, Hubble’s future is still unclear. According to the European Space Agency’s HST website, “There is no set date for Hubble’s retirement. Hubble will continue to work for as long as its components operate and it provides a good service to the scientific community.”