Should you flip a burger once or lots of times? A mathematician has calculated an answer. 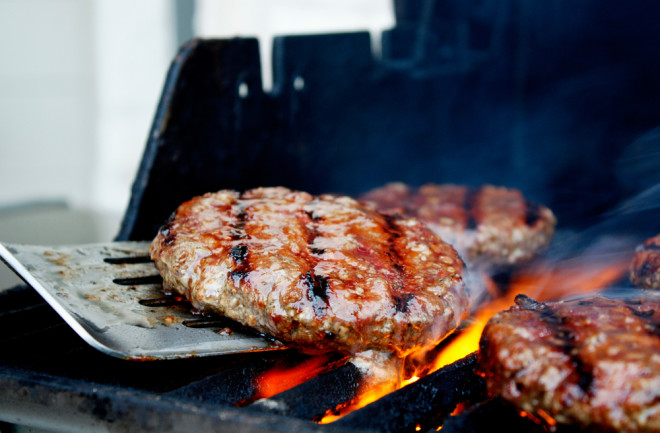 One of the sadly more neglected branches of research is the science of burger flipping. During the BBQ months, a key conundrum for the gastronomically inclined is whether a burger flipped many times cooks more quickly than one flipped only once. And if so, how many flips is ideal?

Today, we get an answer to this important question thanks to the work of Jean-Luc Thiffeault, a mathematician at the University of Wisconsin at Madison. Thiffeault has created a mathematical model of burger flipping which leads to a crucial insight that should allow you to cook burgers 29 per cent more quickly.

Thiffeault’s model is relatively simple. It assumes a flat burger that is one centimeter thick but infinite in extent (in mathematics, dreams can come true). The model includes a heating element on one side of the burger with fresh air on the other.

Heat enters the burger via direct contact with the heating element at 200 ⁰C, where the contact heat transfer coefficient is 900 Watts per square meter per degree centigrade, an apparently reasonable experimental value.

Heat escapes from the burger on the side exposed to the air at 25 ⁰C, where the radiation and heat transfer coefficient is 60 Watts per square meter per degree centigrade.

The meat is considered cooked when it reaches a temperature of 70 ⁰C so an important part of the calculation is to determine the temperature of the meat at the center of the patty. Note that the temperature history at each point in the burger is important. As Thiffeault points out, cooked meat can cool down but it cannot “uncook.”

All this allows Thiffeault to calculate how long it takes to cook a burger. He begins with the case when the burger is not flipped, a process he finds can take forever.

So what happens when the burger is flipped? One idea put forward by the famous science food author Harold McGee is that the faster a burger is flipped, the closer the cooking conditions come to a burger that is heated on both sides simultaneously. So flipping a burger many times, McGee suggested, should speed up the cooking process. But is this true?

Thiffeault puts this theory to the test by simulating the speed of cooking for different numbers of flips, while varying the interval between flips. He then uses the mathematics software MATLAB to optimize the process.

It turns out that for a single flip the optimal time for the first interval is just 45 per cent of the total and accounts for only 29 per cent of the cooking. The rest is done during the second interval, particularly towards the end when there is a sudden surge in the percentage of cooked meat. This is probably a result of the time it takes for heat from both intervals to diffuse through the meat.

This diffusion has important implications for greater number of flips. It turns out that for optimal cooking times, the flipping intervals should be about the same length, except for the last one, which should be longer to allow for diffusion.

But as the number of flips increases, the improvements in cooking time become smaller. Indeed, Thiffeault says they approach an asymptote suggesting that multiple flips can, at best, cook burgers 29 per cent more quickly than a single flip. “The improvement in optimal cooking time is fairly marginal after a few flips,” he says, dedicating his work to the mathematician Charlie Doering who died in 2021.

So the answer to the question “how many times should you flip a burger to optimize its cooking time?” is: a few times!

For the many people who will flip just two or three times, Thiffeault offers one more piece of advice: “The shape of the cooking time function for two and three flips suggests that it is better to err on the side of cooking a bit longer for each flip, since a shorter interval leads to a longer cooking time.”

This may seem rather esoteric but it may have important application. For most people, being able to cook a burger 29 per cent more quickly probably won't make much difference. But if you cook 6.5 million, as a company like McDonald's does every day, then shortening cooking times by a third could save significant energy and related carbon.

So that’s interesting work but there are various ways the model could be improved. As it cooks, the burger’s moisture and fat content will change — a more advanced model might account for this.

Then there is the possibility of introducing a maximum temperature and how that would change the calculations. For many patty flippers, an unfortunate outcome to be avoided at all costs is a burger that is burnt on the outside but raw on the inside.

Does multiple flipping help? Probably. But to be sure, Thiffeault clearly has more flipping work to do.