How Math Can Help You Find True Love 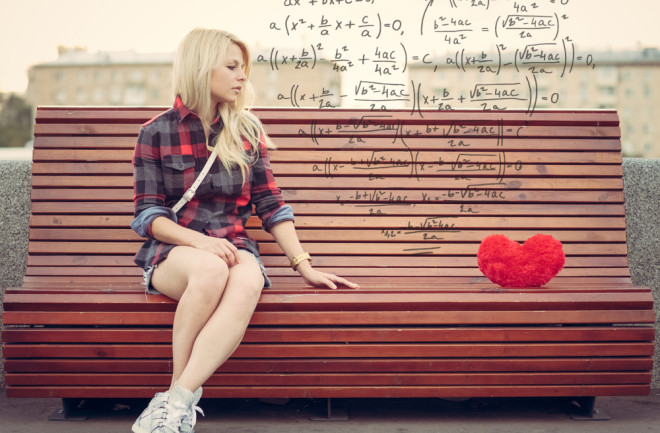 Valentine’s Day may have been invented by the greeting card companies but we think it’s been perfected by science. After all, what’s finding a mate if not basically an exercise in statistics? Attractiveness (like so many questions) can be answered by big data. And relationship happiness, well that’s nothing that a well-written formula can’t predict.

So put aside that mushy feel-good stuff and let’s get down to the real numbers of finding, and keeping, that special someone.

How Many Matches Are Out There?

It’s a question not unlike searching for alien life — and sometimes it feels just as hopeless. But in both instances, math to the rescue.

As Joe Hanson of “It’s Okay To Be Smart” shows in the video below, an equation called the Drake Equation can help calculate the odds. In terms of alien life, the variables are the number of stars, the percentage of those stars with planets, etc etc. For dating, the equivalent numbers might be the percentage of people single at any given time, how likely they are to be attracted to you and vice versa, and how likely you are to make contact with them.

Hanson’s math for a hypothetical love searcher is 871 special someones out there in the world for her. Run your own numbers by following Hanson’s example here:

When Should I Settle Down?

But how many people should you date to get a good sampling of who’s compatible before you settle down? The answer lies with math.

The mathematical tool is called the “optimal stopping theory,” or the point at which you’ll maximize your likelihood of finding the perfect partner. It’s been applied to lots of questions, from hiring the right candidate to buying the right car. The central idea is, in a long line of possible options but which you can only see one at a time, how do you know when you should stop looking?

In 2006, psychologist Neil Bearden found the best working answer to this question. His approach, applied to a pool of 10 people, will on average get you someone about 75 percent perfect; in a pool of 100 candidates, the figure is around 90 percent.

Here’s quick summary of the math, from an article that appeared on Slate:

Step 1: Estimate how many people you could date in your life, n

Step 2: Calculate the square root of that number, √n

Step 3: Date and reject the first √n people; the best of them will set your benchmark.

Step 4: Continue dating people and settle down with the first person to exceed the benchmark set by the initial √n dates.

So there you have it. Get out there and start meeting your quotas!

Will My Love Last?

Let’s say you’ve found someone, and you’re both getting along well. But what does the future hold? Luckily there’s some math for that, too. Scientists created a formula for future bliss based on a (dubiously scientific) relationship survey of 2,000 men and women.

According to their results, some heavily weighted factors include how important he thinks honesty is, how long the couple knew each other before dating, and how important kids are to both parties.

Here’s the formula, via The Telegraph:

L: The predicted length in years of the relationship

Y: The number of years the two people knew each other before the relationship became serious

P: The number of previous partners of both people added together

Hm: The importance the male partner attaches to honesty in the relationship

Mf: The importance the female attaches to money in the relationship

J: The importance both attach to humor (added together)

G: The importance both attach to good looks (added together)

Sm and Sf: The importance male and female attach to sex

I: The importance attached to having good in-laws (added together)

C: The importance attached to children in the relationship (added together)

A quick note: All “importance” measures are scaled from 1 to 5, with 5 being “very important.”

And if you can’t be bothered to drag out the pen and paper then luckily someone has converted the formula into a handy online calculator that does the same thing.

If All Else Fails…

Have you run the numbers, filled your quota and have still failed to find your love? Well, Dr. Love has one more equation just for you: