How Many Extraterrestrial Civilizations Can Communicate In Our Galaxy Right Now? (Spoiler: It's More Than One)

A new way to count the number of intelligent ET cultures suggests we are far from alone; but also that we may never be able to find them, astronomers say. 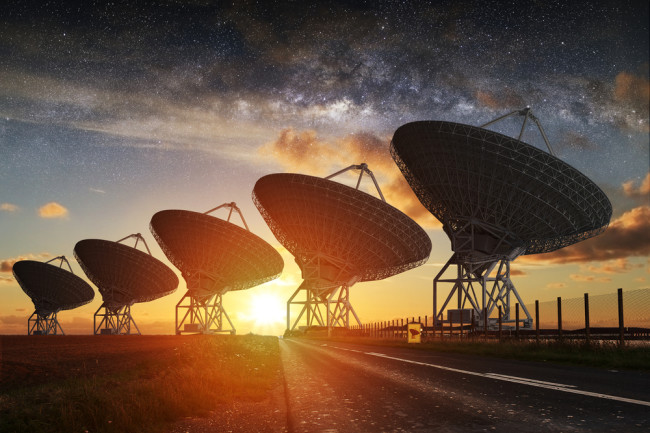 The Copernican principle is the idea that Earth does not sit at the center of universe or is otherwise special in any way. When Nicolaus Copernicus first stated it in the 16th century, it led to an entirely new way to think about our planet.

Since then, scientists have applied the principle more broadly to suggest that humans have no special privileged view of the universe. We are just ordinary observers sitting on an ordinary planet in an ordinary part of an ordinary galaxy.

This form of thinking has had profound consequences. It led Copernicus to the idea that Earth orbits the sun and Einstein to his general theory of relativity. And it regularly guides the thinking of physicists, astronomers and cosmologists about the nature of the universe.

Now, Tom Westby and Christopher Conselice at the University of Nottingham in the U.K. have used the Copernican principle to come up with a new take on the existence of extraterrestrial civilizations. They point out that the principle implies there is nothing special about the conditions on Earth that allowed intelligent life to evolve. So, wherever these conditions exist, intelligent life is likely to evolve over about the same timescale as it evolved here.

This “astrobiological Copernican principle” has important implications for the way astronomers estimate the number of extraterrestrial civilizations that might be capable of communicating with us. Indeed, Westby and Conselice have crunched the numbers and say that, given the strongest limits they can place on the numbers, there are probably about 36 civilizations in the galaxy right now with this capability. But the numbers come with a significant caveat that also throws light on the Fermi Paradox, which famously suggests that if intelligent aliens exist, surely we ought to have seen them by now.

First, some background. Back in 1961, the American astrophysicist Frank Drake wrote down an equation of endless fascination that estimates the number of communicating extraterrestrial civilizations in our galaxy.

Over the years, astrophysicists have reinterpreted these numbers in numerous ways, revising their estimates as new ideas and observational data change the estimates. And, in the last few years, a great deal of new observational data have emerged that have the potential to firm up some of the numbers.

In particular, astronomers have confirmed the existence of exoplanets and begun to understand just how common they are in habitable zones throughout the galaxy. That provides some hard numbers to enter into the Drake Equation. Westby and Conselice have duly updated the equation with the latest figures.

But they have also gone significantly further using the astrobiological Copernican principle. This is the idea that if a planet sits in the habitable zone of a system that is rich in the heavier elements necessary for life, then intelligent life will emerge on the timescale of between 4.5 billion and 5.5 billion years.

The rationale is that intelligent life emerged over 5 billion years on Earth, and there is nothing special about our corner of the universe. Therefore, the same thing will happen over the same timescale in other similar corners.

Nevertheless, this is a much stricter assumption than imagining life can emerge at any time after a planet is 5 billion years old (many stars are 10 billion years old). That’s why the researchers call this the Strong Condition.

When the astronomers enter these numbers into the Drake Equation, the number of civilizations is huge. But there is another limiting factor — the length of time over which these civilizations communicate — whether centuries, millennia or even longer. Obviously, the longer they are able to communicate, the more likely we are to overlap with them.

However, Westby and Conselice decide on a figure of just 100 years. “We know that our own civilization has had radio communications for this time,” they say. So this is the lower limit on which they base their calculations.

And the results make for interesting reading. “In the Strong Condition, we find there should be at least 36 civilizations within our galaxy,” say Westby and Conselice, although the number could be as many as 211 and as few as four.

That may seem like a significant number, but the galaxy is large place. If spread uniformly throughout the galaxy, these civilizations would be a huge distance apart, say the researchers. “The nearest would be at a maximum distance given by 17,000 light-years, making communication or even detection of these systems nearly impossible with present technology,” they say.

That provides an immediate rejoinder to the Fermi Paradox, which is sometimes used to suggest that we must be alone in the universe. It’s not that there aren’t any intelligent civilizations out there, it’s that they are distributed so thinly throughout the galaxy that we cannot spot them.

As Douglas Adams has famously pointed out: Space is big. And the amount we have searched for signs of intelligent life is a tiny fraction. Westby and Conselice point to calculations suggesting the volume searched is equivalent to just 7,700 liters of Earth’s oceans.

Of course, the researchers are well aware of the limitations of their argument. They acknowledge the well-known warning against drawing any inferences from a sample of just one. But that doesn’t stop them from speculating.

The researchers also come to some other interesting conclusions. They point out that if they assume that primitive life arises wherever conditions are suitable for long enough, then the universe should be teeming with it. “Such generous assumptions lead to estimated numbers of habitats for primitive life in the Milky Way which reach into the tens of billions,” they say.

The only question now is how long till we spot evidence of it.