How Luck Made Neil Armstrong the First Man on the Moon 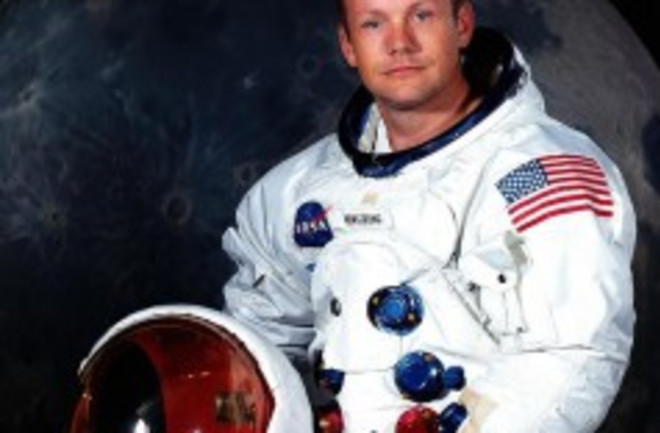 We know Neil Armstrong was the first man on the Moon, but how did he end up with this coveted position? Was he chosen on account of his flying background and civilian status? Or was it the luck of the draw?

It was the luck of the draw. But it’s actually a really interesting and surprisingly convoluted story!

Throughout the Apollo program, choosing who would fly on which mission fell to Deke Slayton. One of the original Mercury astronauts, Slayton was pulled from the flight rotation after doctors discovered atrial fibrillation, and rather than force him out of NASA he was made head of the astronaut office. In this capacity, he developed a rotation schedule: each prime crew had a backup crew, who would then be in line to serve as prime crew three missions later. So the backup crew for, say, Apollo 1, would be the prime crew for Apollo 4. So to get to how he selected Armstrong for the first landing, we have to start at the beginning with Apollo 1.

But first, a word about the missions’ designations. All the Apollo flights were designated by a letter denoting their type, later letters being more complex missions. Leading up to the landing, they looked like this:

NASA planned as many of each mission type as needed before attempting the all-important G mission, so there was no guarantee that the seventh flight would be the first landing.

Slayton wanted one of the other original Mercury astronauts to command the first Apollo mission. His first choice was Al Shepard, but when Shepard was grounded with Meniere’s Disease (an inner ear problem that causes debilitating balance problems), Slayton picked Gus Grissom as commander instead. Grissom had served as commander on Gemini 3 and backup on Gemini 6A, so he was a natural choice in the rotation schedule to command Apollo 1. Rounding out the crew were two rookies, Donn Eisele as command module pilot (CMP) and Roger Chaffee as lunar module pilot (LMP). When Eisele injured his shoulder, Ed White took his place on the crew. For the backup crew, Slayton knew this crew would likely be the first to fly a lunar module and maybe even the first lunar mission. He picked Veteran Jim McDivitt, Dave Scott as CMP (who was at the time training for rendezvous on Geminin 8), and Rusty Schweickart as LMP. This first Apollo prime and backup crew began training in 1966.

For the second mission, Slayton picked another Mercury astronaut Wally Schirra as commander, brought Eisele back as CMP, and assigned Walt Cunningham as LMP. It wasn’t a crew he intended to use on a lunar mission; Schirra was planning his retirement and Slayton intended to punt Eisele and Cunningham over to the Apollo Applications Program as soon as their mission was done. The backup crew, however, was one he designed as a good potential lunar landing crew: Frank Borman, Charlie Bassett as CMP, and Bill Anders as LMP.

Before potential going to the Moon, Bassett was scheduled to fly with Elliot See as the prime crew of Gemini 9. But when both astronauts were killed in a plane crash, Slayton had to change a number of crew assignments. Losing Bassett and See meant backup crew of Tom Stafford and Gene Cernan were now the prime crew with Jim Lovell and Buzz Aldrin serving as the new backup. Backup on Gemini 9 put Lovell and Aldrin in the rotation to serve as the prime crew on Gemini 12, which also put both in line for a potential early Apollo flight assignment.

Returning to our lettered missions, the first Apollo flights were shaping up like this by the end of 1966:

F mission: likely the Apollo 2 backup since the Apollo 1 backup were unlikely to pull a lunar mission

Then the Apollo 1 fire threw everything for a loop again. Not only was NASA dealing with the loss of a crew, but the command module also needed significant redesigns. Slayton opted to keep the crew training for the first LM mission (McDivitt’s D mission crew) training for the same flight, so brought the C mission’s backup crew (Schirra’s) to the position of prime crew. As their backup, Slayton moved up Stafford’s crew, which left McDivitt’s crew without a backup. To fill this spot, Slayton assigned a crew he thought capable of a future lunar mission: Neil Armstrong, Jim Lovell, and Buzz Aldrin. The numeric designations also changed. Now it looked something like this:

Some minor issues brought more changes. In July of 1968, Collins was found to have a bone spur between two vertebrae in his neck and needed surgery. To give him time to recover, Collins was replaced by Lovell on Borman’s crew and Buzz Aldrin was promoted to CMP on Armstrong’s crew. Fred Haise was added as LMP, taking over Collins’ spot. C.C. Williams was killed in a plane crash and was replaced by Al Bean on Conrad’s crew.

But the lunar module was falling badly behind schedule. To stay on track, NASA had to get a little creative. Instead of flying a high Earth orbital mission, it opted — pending the success of Apollo 7 — to fly to the Moon with just the command-service module. The E mission was thus cancelled and replaced with the C-prime mission. Which raised the question of who should fly it. By the rotation, it should be McDivitt’s crew since they were next in line. But McDivitt’s crew had been training for a lunar module mission and Borman’s crew had been training for the high orbit mission. It made sense to switch them around, and for consistency, to also keep the backup crews with their prime crews.

The success of Apollo 8 in December of 1968 meant it was time to name the crew of Apollo 11. Slayton had full confidence in the existing crews as per rotation — both Armstrong’s and Conrad’s — and figured since there was no guarantee that Apollo 11 would be first landing he might as well just stick to the rotation. Apollo 8’s backup became the prime crew of Apollo 11, though with one final change. Mike Collins was back to work after surgery and Slayton felt he deserved a spot on the first available mission. He was made CMP on Armstrong’s crew while Aldrin was demoted to LMP; he’d already trained for this role before Apollos 8 and 9 were switched, so it made sense.

None of this was by design. Slayton said in his memoir that if Gus Grissom hadn’t died in the Apollo 1 fire, he would have commanded the first lunar landing mission.