How Evolution Made the Monkey Face

The complexity, or lack thereof, on a simian's face reveals a great deal about its society. 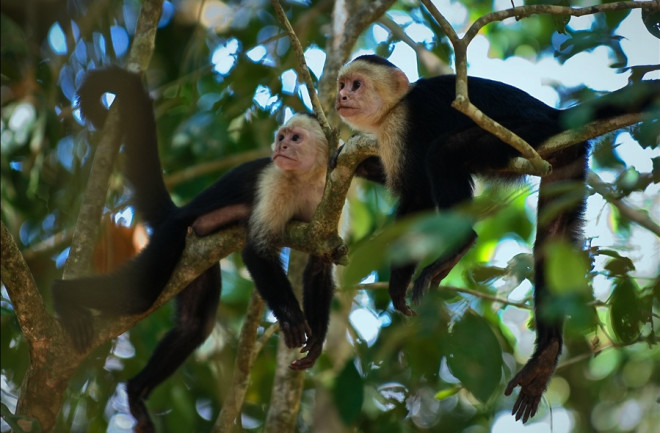 A curious thing happens to white-faced capuchin monkeys when they anoint their bodies with mud and plant matter, a natural insect repellent: With their heads and faces slathered in goop, these highly social primates lose their ability to recognize each other. Previously friendly monkeys can become fighting foes.

This abrupt change in behavior hints at the importance of facial expressions for recognition, University of Washington evolutionary biologist Sharlene Santana says, and could help to explain why primate faces are so wildly divergent: Some species, like white-faced capuchins, have monotone hair and skin color; others, like the northern owl monkey, sport a dramatic mix of fur and flesh tones.

Biologists have long seen primates’ facial expressions during social interactions as clues that factors like group size drove the stark differences in their facial evolution. But there was little direct evidence to support the theories, so Santana decided to study a large number of monkey species, in a wide variety of social group sizes and environments, to see how their faces had evolved.

Santana found that the complexity of a species’ facial color patterns is tightly linked to certain social systems. Species that live in larger groups tend to have plainer faces than those living in smaller groups. Primates in large social groups most likely benefit from plain faces that allow for a greater range of expressions, she explains.

But among primates in smaller groups (and those that live near many different species, regardless of group size), more complex patterning makes it easier to recognize members of their own species, so they can focus their mating efforts and territorial disputes where it counts.

The connection between group size and facial evolution tells us something about our own ancient history too, since human faces are about as plain as it gets. “We can predict that the ancestors of humans were living in large groups, where facial expressions were really important,” Santana says.

She is currently investigating whether her results hold up among the Old World primates of Africa and Asia, a group that includes monkeys like baboons and mandrills and apes such as orangutans and chimps.

Researchers counted the number of unique skin and hair colors to score facial pattern complexity among 129 species of New World monkeys, which reside in Central and South America.

Don’t let the bright-red visage fool you: With only one facial color, this monkey is as plain as they come. The species lives in large groups, averaging 20 members but swelling to as many as 100. The uakari’s monotone face and lack of facial hair could make it easy for others to read its expressions. Blood flow through a large number of facial capillaries gives the face its scarlet hue, which potential mates may regard as a signal of good health.

For the golden lion tamarin, Brazil is chilly enough to warrant a luxurious red fur coat. The species makes its home in forests 1,500 miles south of the equator, providing evidence for the “hair rule.” This theory predicts that longer, thicker hair will develop in cold climates. The primates have low facial pattern complexity and live in medium-size groups, but the takeaway here is that climate can play a major role in facial appearance

These monkeys would have very simple gray faces if it weren’t for their striking moustaches. The primates are a bit of a mystery. They live in medium-size groups of around five, but researchers have called them “poker faced” for their lack of facial expression. Males, females, and juveniles sport the fanciful facial hair, and nobody knows why. The display could be a rare example of the same sexual selection trait at work in both sexes.

This black- or brown-furred species gets its common name from two characteristic tufts of hair on its crown, but a ring of white frames its otherwise dark face. These monkeys live in medium-size groups of around nine, and females usually outnumber males. Known for their tool use and prehensile tails, they can communicate via body language, facial expressions, and sometimes with a high-pitched scream followed by a big hug

The northern owl monkey, a wide-eyed, nocturnal critter, has particularly complex facial coloration. The animals live in pairs with their offspring, and occasionally a family will also include a young adult. For animals living in such small groups, it is especially important to accurately identify other members of their species. How else to find a viable mate or fend off a territorial encroachment?

The white-bellied spider monkey has one of the most complex faces of New World species. Yet it lives in large groups of about 20, where plain faces would be more advantageous for nonverbal communication. What gives? This species, which spans northwestern South America, shares its habitat with three closely related species, a situation that gives an advantage to monkey species that can tell each other apart.