How Elysium is a Carnival Ride, and Why its Atmosphere is a Bucket of Water

Elysium is set over a century in the future, but you can test its physics today. All you need is a carnival ticket and a bucket of water. 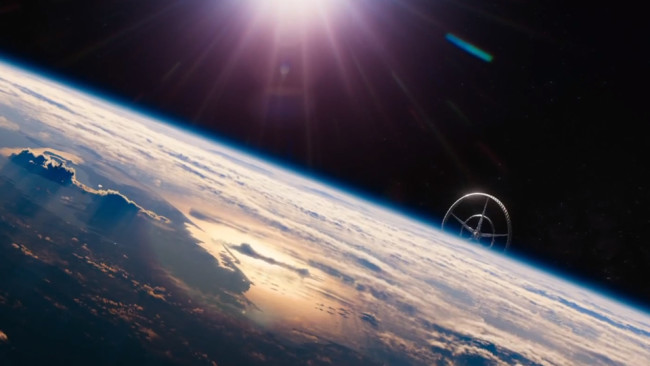 The latest sci-fi thriller from District 9 director Neill Blomkamp, Elysium tells the story of the haves and the have-nots in the 22^nd century (quite literally). Those with the means have fled to a beautiful Halo-style ringworld orbiting Earth, while the rest scrape by on the over-populated and polluted surface. This dystopian milieu is filled with technology that might in fact take 100 years to create—miraculously mending “medpods,” flesh-shredding railguns and shurikens, and superhero-making exosuits—but we could start building Elysium itself today. In fact, we have been theorizing about space stations with their own gravity for almost 40 years.

According to an interview on io9, Elysium’s visual effects producer based the design of the space station on the Stanford Torus, first conceived by NASA in 1975. Originally, the design specified a wheel a mile in diameter that housed 10,000 people. To avoid the serious bone loss and other problems associated with micro-gravity, a torus station spins at a certain rate in order to simulate gravity. Creating gravity sounds like another futuristic technology, but if you’ve ever been to a county fair, you’ve likely experienced it. The “Round-Up” and “Gravitron” rides simulate gravity by fighting inertia. When riding, your body wants to fly out from the center in a straight line, but there is the wall of the ride in the way. The force pressing you up against the wall of the ride—the “centripetal force”—is a consequence of this battle between inertia and the ride’s structure.

But unlike the Gravitron, which can exert “hypergravity” allowing you to do less than intelligent things, a spinning space station like Elysium has to be comfortable and not vomit inducing. “Comfortable” means a few things. First, the simulated gravity should be near Earth’s gravity, meaning that you should be accelerating into the wall at 9.8 meters per second per second, or 1G. Second, the spin rate of the wheel that simulates the pull of gravity shouldn’t make you sick. Based on the tests we subject our astronauts to, a rate below two revolutions per minute is livable. Any faster than that and you start to notice—nausea, dizziness, and trouble walking occur at seven revolutions per minute and above.

To meet these criteria for suitable simulated gravity, a spinning space station has to be a certain radius. The wider the radius the slower the whole station has to spin to reach 1G. Accordingly, the original Stanford torus specified a half-mile radius. The producers of Elysium admirably wanted to make sure their concept was scientifically sound, so they made their station’s radius 20 kilometers—a little more than 12 and a half miles. So, according to the equations you learn in any introductory physics course, Elysium could spin at much slower one revolution per minute and still generate the gravity humans are adapted to, which is why the station looks like it hardly spins at all in the film.

Of course, actually building such a station is the bigger challenge. If 22^nd century humanity were up to the task, the Elysium station would have to be hauled into space—millions of tons of material—and assembled piece by piece in orbit like the International Space Station. It would also need a power source, as frictional forces would sap its spin, and the whole station would need to be strong enough to prevent it from flying apart under the constant rotation. It’s a plausible plan, and if beating cancer 100 years from now is as simple as laying under a beam of light for 10 seconds, putting a station in orbit might be as commonplace as building a skyscraper.

Artificial gravity is a comfort, but an atmosphere is essential. Perhaps the most interesting feature of the station Elysium was that—unlike an airplane cabin—its atmosphere wasn’t canned up in some hollow tube. A landing spacecraft could enter its air like it would on Earth. Like the idea of a rotating space station, holding in an atmosphere without a roof isn’t science fiction, and you can prove it to yourself.

All you need is a bucket of water to see how Elysium’s atmosphere could work. Fill the bucket half way and hold it upside down, the water of course falls out. But spin the bucket of water around in a circle and the water stays pressed to the bottom of the bucket; even when the bucket is directly above your head (as I do for your entertainment in this Vine video).

Just like the carnival ride, the water is pressed up against the bucket in a fight with inertia. Both air and water behave like fluids, so what works for one can work for the other. If the residents of Earth built a sealed version of Elysium, filled it with air, started it spinning, and then removed the roof, most of the air would stay pressed to the surface just like the water in the bucket!

The atmosphere wouldn’t stay forever. Even if the sidewalls were high enough, the random motion of air particles means that the air would eventually escape into space through the top. But who knows what kind of capturing technology we will have in 100 years? Perhaps the air would be prevented from escaping with a badass force field as in this clip.

We are already closer than one might think to having exosuits like the ones grafted onto Matt Damon and Sharlto Copley, we already have UAVs and drones, and you can simulate a space station atmosphere with a bucket of water. Elysium did a decent enough job following physics that the most unbelievable thing about the film might be Jodi Foster’s accent.