How Do You Train Astronauts When You Don't Have Any Spaceships? 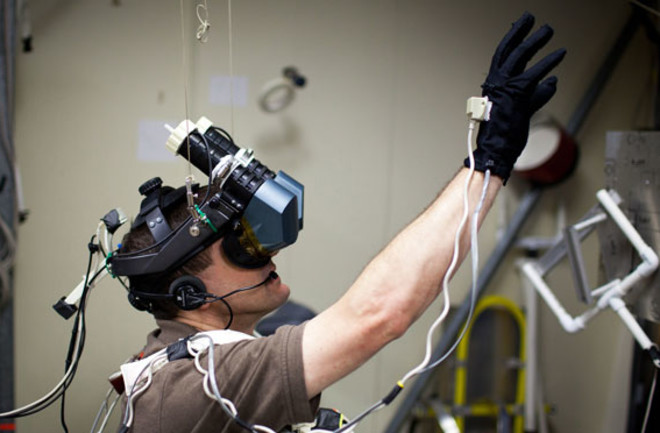 Dottie Metcalf-Lindenburger waves and smiles from inside her space suit as a bright yellow crane slowly lowers her into the world’s largest indoor pool. As the water closes over her head, a trio of divers swarm around her. They detach her 200-pound suit from its restraints and guide her down to a life-size replica of a portion of the International Space Station that hulks on the pool’s floor like a sunken galleon. The divers gently spin Metcalf-Lindenburger, 37, around and upside down as they fine-tune the flotation devices that render her neutrally buoyant—suspended underwater without rising or sinking, an approximation of zero gravity.

“Hearing me ok?” asks one of the technicians monitoring a video feed from the glass-walled control room overlooking the pool. “Yep, all set,” replies Metcalf-Lindenburger’s disembodied voice through the control room’s speakers. As she grabs a handrail on the faux space station’s exterior to begin her practice space walk, Led Zeppelin’s “Over the Hills and Far Away” starts playing on the shared audio connection. “Get-psyched music,” the tech tells me with a grin.

It’s just another day of astronaut school at Johnson Space Center, the 1,620-acre complex south of Houston that has served as NASA’s main training facility and launch center since the beginning of America’s space program. John Glenn prepared here to become the first American to orbit Earth. Neil Armstrong practiced the maneuvers that would take him to the moon. Now Metcalf-Lindenburger is joining the latest generation of the best-trained space travelers in the world. There is just one unresolved question: What exactly is this generation training for?

With last year’s shutdown of the space shuttle program, the only Americans going into space for the next few years will be the handful flying on Russian Soyuz rockets. NASA hopes to start buying rides to the space station from private companies around 2015, while its own focus turns to the long-term challenge of developing rockets capable of taking astronauts to Mars or an asteroid. Those plans do not provide many imminent opportunities to leave the ground.

Nonetheless, NASA is maintaining and even restocking its famed astronaut corps. The agency has just 56 astronauts on the payroll, down from 109 in 2007, but last November it began accepting applications to recruit a dozen or so more, touting opportunities to “support missions to the space station” and eventually embark on “missions beyond low Earth orbit.” Judging by the 6,000 applicants, plenty of would-be spacefarers share NASA’s optimism, despite the likelihood that the closest these astronauts will get to space walking will take place in a giant swimming pool.

Cream of the Crop

When the newly formed NASA enlisted its first crop of astronauts in 1959, it recruited solely from the ranks of military pilots: fearless flying men (and only men) possessed of the famous “right stuff.” Today the prerequisites are surprisingly few. You need to be a U.S. citizen, hold a bachelor’s degree in engineering, mathematics, or biological or physical science, have three years of relevant experience or 1,000 hours piloting a jet, pass a physical exam, and stand between 5-foot-2 and 6-foot-3. Of the 3,500 who applied for the astronaut class of 2009, more than 2,900 met all these qualifications. That puts a lot of pressure on the selection committee, most of them former astronauts.

The committee wants a mix of professional backgrounds as well as gender, racial, and ethnic diversity, says Duane Ross, the folksy, white-haired head of astronaut candidate selection and training who has helped pick rocket jockeys for 34 years. The current corps includes pilots, scientists, doctors, Navy seals, a veterinarian, and schoolteachers—including Metcalf-Lindenburger, a former high school earth science instructor. “It’s always been part of our mission to inspire the next generation,” Ross says.

Perseverance is also key. Mike Foreman, 55, a solidly built former Navy pilot and veteran of two shuttle missions, applied eight times before he was accepted in 1998. “I guess they finally got tired of seeing my name,” he says.

The dozen or so applicants per class who make the cut—referred to within NASA as Ascans (short for “astronaut candidates” and pronounced to generate a smirk)—undergo two and a half years of intensive training before earning the title of astronaut. Training has changed a lot in the 50 years since Glenn was strapped into a giant centrifuge to experience the devastating g-forces of spaceflight. Today’s regimen is less physically demanding (the centrifuge was mothballed in 1999 due to cost) but considerably more intellectually rigorous, high-tech, and global in scope.

Much of the training is carried out with sophisticated simulations inside the Virtual Reality Laboratory, a two-room space cluttered with computer monitors, electronic gear, and a poster from the Clint Eastwood movie Space Cowboys. Elaborate headsets suspended from the ceiling with pulleys and wires immerse the trainees in a digital illusion of floating alongside the space station while Earth slowly rotates below. The simulations model the station down to the handrails, struts, and patterns of shadows and sunlight playing across the solar arrays. Using glove-mounted controls, the candidates practice space walking and extravehicular repair skills. “This is the only place we can fit the entire station,” says Dave Homan, a former lab manager.

Ascans receive plenty of real-world training, too. They fly in supersonic, two-seat T-38N jets to practice making high-speed, high-stakes decisions. Then they dive into the 6.2-million-gallon pool known as the Neutral Buoyancy Lab. The astronauts spend six-hour sessions underwater, getting used to the feel of zero gravity. “It’s very demanding mentally and physically,” astronaut and doctor Kjell Lindgren says. “You have to learn to be very efficient to keep from duplicating tasks and to conserve energy.”

The candidates also spend weeks at a stretch overseas, training in countries, like Japan and Russia, that are partners on the International Space Station. In fact, today American astronauts are required to learn Russian, the language of their former cold war rivals. After all, they need to be able to talk to their counterparts giving them a lift on the Soyuz.

Is It Time to Go to Space Yet?

As I toured the Johnson facilities, it was easy at first to forget that NASA’s manned space program is in such flux. Then I entered the Space Vehicle Mockup Facility, a brightly lit, hangarlike building filled with full-scale models of space station modules and the cockpit of the Soyuz. In the corner I caught a glimpse of the space shuttle mockup being dismantled and readied for shipment to the Museum of Flight in Seattle. The daily routine within the Johnson Space Center may seem normal, but it is headed for certain change now that NASA’s only space vehicle, which transported 852 people over 30 years, is out of service.

Even during the shuttle era, astronauts often waited years after basic training to be assigned a trip into space. Simple math suggests those waits will get longer. NASA used to fly several seven-person shuttle crews each year but has purchased just 12 round-trip seats through 2016 on Russia’s Soyuz spacecraft. Once assigned to a specific mission, the lucky dozen who will fill those seats spend an additional two years training, much of it in Russia with their crewmates.

The 56 active astronauts are well aware of the unsettling possibility that all this training will be for nothing. NASA’s funding is perpetually under threat, and its goals change with each presidential administration. Johnson’s staff has been cut significantly since the scrapping of the shuttle.

Still, there is reason to buy into NASA’s optimism that astronauts will get more real-world experience soon. In May the private company SpaceX successfully launched its unmanned Dragon capsule to the space station. If its next 12 contracted missions go well, the vehicle could start carrying passengers (some employed by SpaceX, others by NASA) into low Earth orbit by 2015. The timetable for NASA’s longer-term projects is more handwavy—the Obama administration talks vaguely about missions to an asteroid around 2025 and Mars around 2030—but the agency is working on a well-defined program, called the Space Launch System, to develop powerful rockets for interplanetary travel, whatever the destination.

For now, astronauts like Foreman and Metcalf-Lindenburger remain confident that their daredevil flights and six-hour swims will lead to inspiring space adventures—that NASA's drift is a temporary lull. “I think the future is bright for the space program,” Foreman insists. “We’re on the right path. It’s just a question of what steps we’ll take.”