How Do Volcanoes Create Towering Columns in Rock? 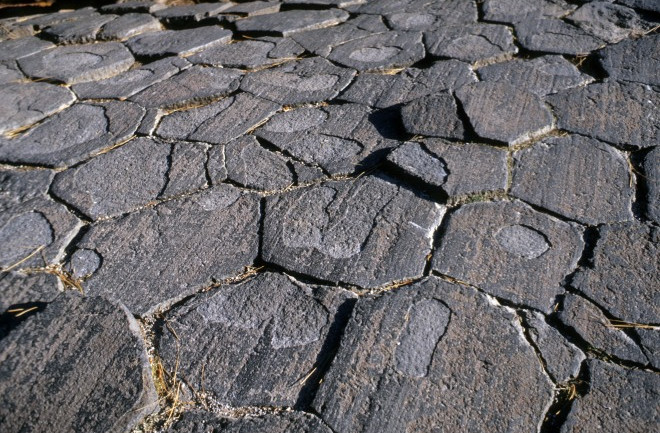 The glaciated tops of columns in the Devil's Postpile of California. Photo by Erik Klemetti. Last week, Commander Chris Hadfield (of International Space Station fame) tweeted this image, asking what could have caused such strange columns to form in rocks. I read a lot of the replies to the Commander's question and while many got at the key processes, it seems like there is some confusion about how columns can form in rock. In most cases, it is thanks to magma! Under the right conditions, magma can cool in such a way as to form polygonal shapes that can be straight or bend and twist - we call these phenomena columnar joints. They can be spectacular, created with what looks like the precision of a master sculptor, but really it all boils down to the physics of cooling.

Giant's Causeway in Northern Ireland, formed by volcanic eruptions over 50 million years ago. The plates that make up the columns are clearly seen in this shot. Photo by Patrice78500 / Wikimedia Commons.Columns can form in a variety of patterns, mainly hexagonal (but can be found with anywhere from 4-8 sides). They can vary in size from only a few centimeters to meters across. They form when a thick body of cooling magma (or even ash - see below) starts to contract and cracks begin to form. These cracks start at/near what is called the "cooling surface", which might be the top or bottom (or sides) of the lava flow, magmatic intrusion or ash deposit. The cracks propagate into the cooling material making (upon close examination) stacks of plates that form the columns. The plates are usually aligned parallel to the flow surface (see above), while the columns form perpendicular to the cooling surface. If you look closely at a column, you will see feather-like fracture patterns called "pluma" that represent the cracking of the cooling material in response to the strain that the material is feeling as it contracts.

Columns in the Takachicho-kyo Gorge in Japan, showing the colonnade and entablature common in these columnar jointed basalt flows. Photo by Juuyoh Tanaka / Flickr. One of the most famous places to see columns is in and around the Columbia River Gorge and associated canyons along the border of Oregon and Washington. Here we find thick basaltic lava flows from the Columbia River Flood Basalts (see below) that stacked up and cooling, creating layers of columnar jointed rock. The parts of the flows with clear columns are called the colonnade while the areas where the columns are less-than-perfect or absent are the entablature. Typically, colonnades form at the top and bottom of the flow (starting from the cooling surface) with a middle area of entablature (see above). Some of places that have great columns include the famed Giant's Causeway, the Devil's Postpile near Mammoth Mountain in California (see above), Yellowstone National Park and in the Bishop Tuff from the Long Valley Caldera (see below). We've even spotted columnar jointing in Martian lava flows!

Columbia River Basalt flows in the Palouse River Canyon of Washington. Photo by Williamborg / Wikimedia Commons. Now, if the lava flow runs into some other cold surface -- let's say a lava flow comes up against a canyon wall or maybe ice from a glacier (like seen in tuyas), you can get columns that look like they're pointed in all directions, but that's again thanks to the fact that they form perpendicular to whatever orientation we find the cooling surface. If lava flows out over water or soft, muddy sediment, that seems to help to get columns to form, likely thanks to all that extra cooling the water adds.

Massive columns in the pink Bishop Tuff from the Long Valley caldera, California. Photo by Erik Klemetti. Researchers have tried to mimic the production of columns, but its tricky. To get the cooling needed to create them in molten rock, you need a significant volume, more than we can really produce in a lab. So, instead, analog materials have been used to create columns. Taking a slurry of water and corn starch, you can create columns through desiccation, where contraction occurs due to loss of water instead of cooling. You can make some of the same patterns that we seen in the geologic record in these corn starch experiments. In this way, we can start to answer questions about whether the overall shape of columns and how well they found might be a product of the rate that the column forms, both in terms of the absolute rate of formation and whether that rate was constant the whole time the column formed. All it takes it the right cooling conditions, and you can produce some remarkable geometric features!