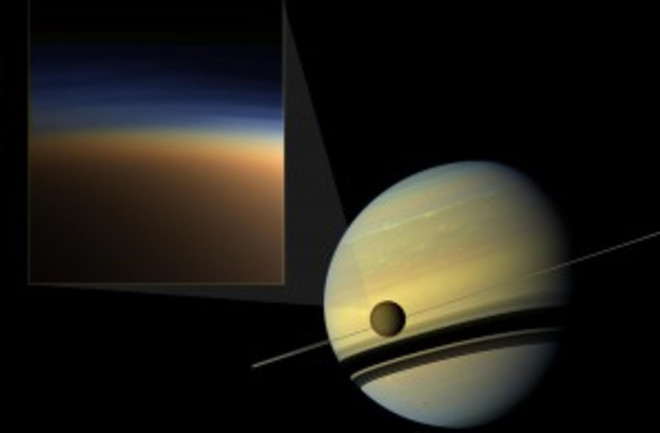 “Both space probes and land-based instruments have identified the chemical composition of the major constituents of the haze," said Musahid Ahmed, a scientist in Berkeley Lab’s Chemical Sciences Division and co-leader of the study. "However, how some of heavier particles are formed from the lighter gases is still an open question.” Scientists in the Chemical Sciences Division at the Department of Energy’s Lawrence Berkeley National Laboratory (Berkeley Lab) reached a conclusion that disagrees with existing theories suggesting that super hot chemical reactions are behind the chemical makeup of Titan’s hazy atmosphere. The team at Berkley Lab has found that these theories are “not possible in the low temperature environs of Titan's atmosphere,” Ahmed said.

The team found a low-temperature chemical mechanism that could have sparked multi-ringed hydrocarbon molecules — molecules that later became the more complex chemicals in Titan’s haze — to form. “This gives rise to a missing link in Titan’s chemistry,” Ahmed said in a statement. These researchers identified this mechanism using vacuum ultraviolet light experiments combined with computer simulations and models to recreate and study the chemical reactions that create the atmospheric makeup of Titan.

By combining a two-ring molecule (pictured at the top-left) and a hydrocarbon (pictured at the bottom-left), scientists exploring Titan's atmosphere may have found clues as to how the moon's atmospheric haze formed. Benzene, a single hydrocarbon with a single-ring structure, has been detected on Titan and is thought to be a building block for larger hydrocarbons — two- and three-ring structures known as polycyclic aromatic hydrocarbons (PAHs) — that make up the molecules and particles in Titan’s hazy atmosphere. Researchers in this study combined a two-ring PAH with another hydrocarbon and formed a 3-ring PAH. Both of the combined molecules are thought to exist on Titan, so, after simulating chemical reactions that might happen on Titan in the lab, the researchers think that such reactions could happen on Titan and contribute to its atmospheric haze. Understanding the complex chemistry of Titan could help to clue scientists into the atmospheric makeup of other moons and planets, even earth. “People use Titan to think about a ‘pre-biotic’ Earth – when nitrogen was more prevalent in the early Earth’s atmosphere,” Ahmed said in the statement. But, while this research certainly refines our understanding of Titan’s chemistry and how molecules in the atmospheric haze may have formed, “a lot remains,” Ahmed said about studying Titan. This study was published Oct. 8 in the journal Nature Astronomy