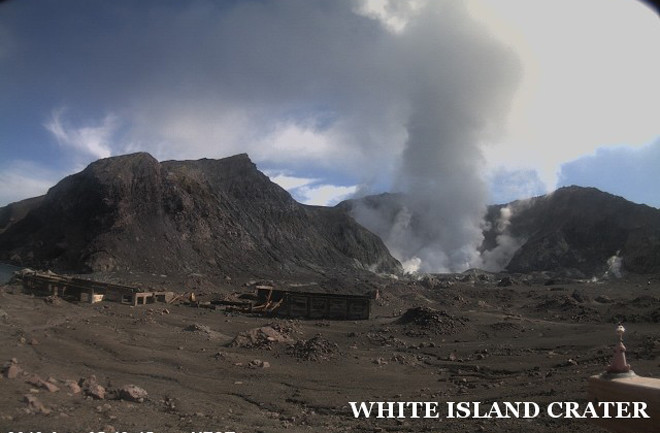 There has always been a fragile relationship between volcanoes and tourism. Volcanic features are some of the most fascinating in the world — just look at the millions of people who visit Yellowstone or Crater Lake National Parks for but two examples of hundreds of volcanic tourist attractions around the world. (And that doesn't even consider all the extinct volcanoes or volcanic deposits that can create amazing landscapes as well).

However, with the splendor of volcanic features comes the danger that you, as a tourist, are visiting an active volcano. Sometimes, that danger is low, where either the volcano has been dormant for thousands of years, but the signs of magma beneath are still visible. However, the danger can appear to be low in some places but in reality, you are literally putting your lives in the hands of tour operators when you make the visit.

One of the best examples of this might be White Island in New Zealand. Off the northern coast of the North Island in the Bay of Plenty, White Island is an active volcano that is part of the volcanic arc that stretches from the Kermadec Islands to the north all the way to Ruapehu in the south. Most of the volcanic edifice sits underwater, but the main crater is above water, sitting out like a sentinel in the Bay.

Boat tours of White Island occur daily from Whakatane, where tourists can go to the island and actually walk inside the main crater - which, in theory, is nothing more hazardous than taking a stroll through the Norris Geyser Basin at Yellowstone or Bumpass Hell at Lassen.

However, unlike those locations, White Island has erupted recently - in fact, between 1998 and 2001, the volcano produced multiple VEI 2-3 eruptions and is one of the most active in New Zealand.

Does this mean that tours shouldn't happen? It is a tricky question. I was in New Zealand in 2009 and considered taking the White Island tour. However, the more I thought about it, the more it bothered me that these tours, although offering warning to tourists of the potential dangers, are potentially the perfect cocktail for a Galeras-like tragedy.

By making the visits to the White Island crater seem routine, it can lull the tour operators and tourists into a false sense of security, much like what happened with Stanley Williams and the other volcanologists who visited the crater of Galeras in January 1993.

In the case of Galeras, the volcanologists were caught off guard by a relatively small explosion in the crater, leading to the deaths of six of the science team and three tourists.

Visiting White Island is almost exactly the same as climbing down into the crater at Galeras, and although GNS Science keeps close tabs on the activity at White Island, the 1993 tragedy at Galeras shows that even seasoned veterans of volcano monitoring can be fooled or volcanoes can erupt with little to no notice (such as what White Island did in 2000) ... and unlike the Tongariro Crossing that passes between two active volcanoes, the White Island tours go into the active volcano's crater.

That being said, people (tourists and tour operators) should also be able to make choices on their own rather than being told what is and isn't safe by the government. However, a line needs to be drawn somewhere about what can be permissible and what represents such a high danger than allowing underprepared (and potentially oblivious) tourists into an area.

New Zealand definitely leans towards the side of letting people make this decision - when I visited the Waimangu Geothermal Valley, I was taken by how close they allow people to come to active hydrothermal features, with boiling, acidic waters and active steam vents (as compared to the careful shepherding of tourists at Yellowstone, for example).

For the White Island tours, people are given protective equipment like gas masks and helmets, but if even a small phreatic (steam-driven) explosion were to happen when a group was in the crater, the consequences could be catastrophic. Will it take a half dozen deaths at White Island to change the culture, or is that merely the cost of being adventurous? It is hard to say.

Currently, White Island is at Alert Level 2 (one step above Tongariro and Ruapehu) after experiencing a small night eruption. GNS Science raised the aviation alert at White Island to "Orange" as well.

An obvious steam plume being seen coming from the crater (see above) after a substantial increase in seismicity on Saturday (August 4), which has now returned to normal levels.

All of these signs suggest that what has been a quiet decade for White Island might be drawing to a close. After Sunday night's small eruption, it is unclear whether tours will still go to the island, for now.

There doesn't seem to be much evidence that Sunday's eruption had much (if any) warning, so we are very lucky that it occurred in the middle of the night. Keep tabs on White Island using the GeoNet webicorder or webcams for the volcano