How Could We Find a Wormhole Hiding in the Milky Way?

A wormhole is a hypothetical concept that connects two separate areas of space-time. But if the Milky Way has one, we might be able to detect it by looking for oddly orbiting stars near it. 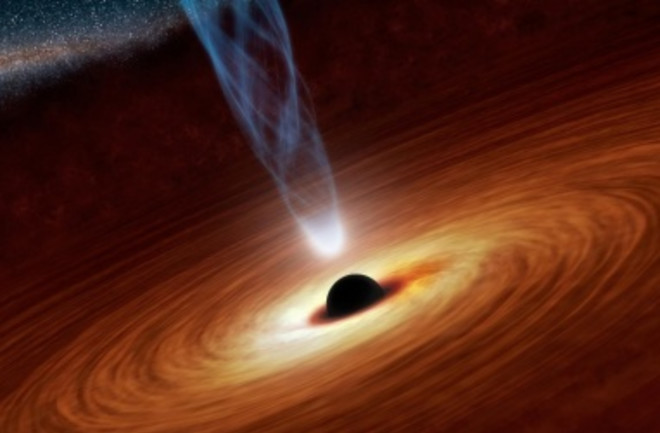 A new study outlined a possible method to search for a wormhole at the center of the Milky Way, where a supermassive black hole, like the one seen in this artist’s concept, resides. (Credit: NASA/JPL-Caltech)

If there was a wormhole in the center of our galaxy, how could we tell? Two physicists propose that carefully watching the motions of a star orbiting the Milky Way’s supermassive black hole might help scientists start to check. The researchers published the idea in a recent paper in the journal Physical Review D.

A wormhole is a hypothetical concept that connects two separate areas of space-time. Wormholes often appear in science fiction narratives like the 2014 film Interstellar as a convenient way to get from point A to point B in the vast universe. Physicists have many theories that describe how wormholes might behave, if they exist, but haven’t yet found any.

De-Chang Dai of Yangzhou University in China and Dejan Stojkovic of the University at Buffalo decided to tackle the question of how scientists might test whether a wormhole exists in the center of the Milky Way.

For this to be possible, the wormhole would have to be “traversable.” In this type of wormhole, space-time curves dramatically from either side of the wormhole to meet at a narrow “mouth” in the middle, which contains a black hole (such as, for example, the supermassive black hole in the center of the Milky Way).

A traversable wormhole allows information from one side, like light or the influence of gravity, to pass through to the other side. This is the key to the physicists’ proposal for checking whether there’s a wormhole at the center of the Milky Way. If a wormhole connects the center of our galaxy to another distant region of the universe, objects close to our side of the wormhole would feel the gravitational pull of objects on the other side of the wormhole.

The two researchers calculated that a star a few times the mass of our Sun orbiting on the other side of the hypothetical wormhole could affect the orbit of S2, a star that orbits close to our galaxy’s central black hole. The effect would be small, enacting a change in the expected gravitational acceleration of S2 that’s about 10 million times weaker than the strength of gravity on Earth. With all the observations astronomers currently have of the star S2, they can only detect changes down to about 100 times that size.

So, the capabilities aren’t quite there, but “it’s not crazy far,” says Stojkovic. With more observations of S2, he says, it might be possible to detect changes that tiny in a decade or so, if they exist.

The caveat is that just seeing a gravitational acceleration that small can’t confirm whether the effect came through a wormhole or not. The effect could come from some object in the Milky Way (on “our side” of this hypothetical wormhole). If scientists do ever measure such a minute change in gravity on S2, they’ll need to do a lot of modeling to understand where the gravitational effect could be coming from. If they can rule out all other possibilities that are more likely, Stojkovic says, then it might be a wormhole.