How Close Are We to Star Trek Propulsion? 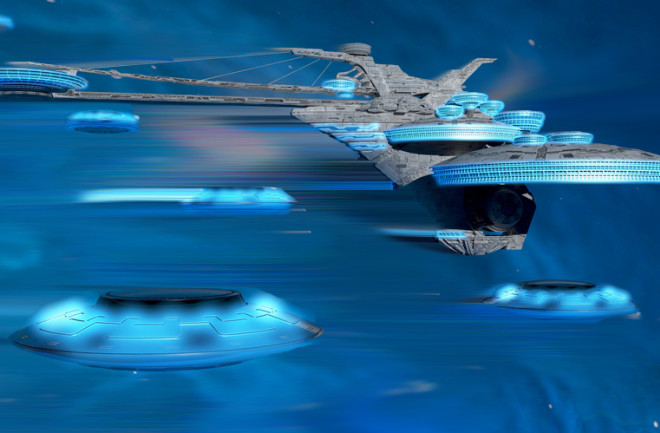 It’s popular to talk about how the original Star Trek, set in the 23rd century, predicted many devices that we’re using already here in 2014. It started with communicators that manifested as flip-open cell phones that many already consider too primitive, moved through computers that talk and recognize human voices and provide instant translation (all of which are constantly improving), to medical applications such as needle-free injection, anti-radiation drugs, and a medical tricorder.

But looking at the more exotic Star Trek technologies, it’s harder to find credible reports that we’re close to a Trek-like world. This is true for Star Trek’s transporter: Despite some success in “quantum teleportation,” which could have applications for computers and possibly communication technology, no experts are saying that this is about to lead to a technology for beaming humans or any other objects from place to place.

It’s also true for space travel. Star Trek depicted a world where people would move between planets and star systems (at least nearby systems) frequently and very swiftly. The United Federation of Planets contains worlds separated by dozens of light-years, which ordinary Earthlings regularly traverse over time periods measured in days to weeks.

Clearly that’s one aspect of Star Trek technology that is far from being a reality in the present day. But the topic isn’t just in the realm of sci-fi: Scientists are taking various approaches to try to create the next generation of space propulsion, beyond the chemical rockets that require most of the mass of the ship to be fuel.

If we want spaceflight to become routine for humans as aviation did, we’ll need major innovations. Are any just around the corner?

You may have heard about a new experimental NASA engine, as the story was circulating at warp speed less than a month ago. Stories have been quite optimistic, with headlines such as “Impossible NASA engine may actually work.” And now, because of inclusion of the word “impossible,” there’s been some backlash of skepticism based on a rationale that goes something like“How could it be that an engine violates Newton’s third law of motion (for every action there’s an equal and opposite reaction)? Surely NASA is more likely to be wrong than Newton.”

We don’t know how the story will turn out, but for the record let’s establish one thing: if the new engine works, it does not violate Newton’s third law. The misunderstanding is based on the fact that the propulsion device does not require a supply of reaction mass. Instead the idea is that, using a kind of electromagnetic effect, it manages to exert force against virtual particles in space. These are subatomic particles that, according to quantum theory, continuously pop into and out of existence. Newton’s theory is a special case that does not apply in the quantum world, just as it does not apply to objects moving at relativistic speeds (close to the speed of light).

Einstein demonstrated the latter, which did not disprove Newton, but expanded on his discoveries, while a series of other physicists developed quantum theory, which also does not disprove Newton. Whether you’re throwing a basketball, performing a double twisting back somersault, or flying supersonic across the Atlantic Ocean, Newton is still correct. And he’d be correct with this experimental engine too, taking the virtual particles into account. Yes, they sound weird, but in terms of a reaction mass, they’re like the water or the air being pushed back by the propeller of a boat or airplane.

Now let’s go beyond this new engine. What about warp drive? On Star Trek, warp allows humans and others to travel faster than light without violating the laws of physics. The theory of special relativity, which Albert Einstein presented in 1905, shows that no object can reach the speed of light. Over the next several years, however, Einstein developed his theory of general relativity, consisting of various field equations that solved in different ways. It turns out that some of the solutions that can be worked out for the Einstein field equations allow us to move space itself faster than light. In other words, we could warp space, squeezing the space in front of a ship and stretching the space behind us.

Nobody knew this was possible back in the 1960s; at that time, Star Trek’s creator, Gene Roddenberry, simply needed a way to move the USS Enterprise swiftly between star systems. In addition to going where no TV show had gone before by providing thoughtful social commentary, Roddenberry wanted a show that would be more plausible scientifically than other space shows of the time. Remember Lost in Space, and how the Robinsons started out in suspended animation, because it would take decades to get to the nearest star system, then all of a sudden they could traverse interstellar distances in a matter of days? Roddenberry wanted to do a lot better, and that’s what led to the warp engines.

Over three seasons, an animation series, movies, Star Trek: The Next Generation, and subsequent Star Trek series, we learned more of the details of warp drive. Warp had been invented by a human, Zefram Cochrane, in the mid-21st century, but the Vulcans had invented it centuries earlier. It required an exotic substance called dilithium and a device called a warp coil. And finally, the technology had progressed in increments; Cochrane’s warp had been relatively slow, and only by the mid 22nd century (a century before Kirk’s Enterprise) had humans achieved warp 5, equivalent to 125 times the speed of light (Cochrane scale). But slower warp had been good enough for Cochrane’s generation to colonize the Alpha Centauri system, 4.3 light-years from Earth.

Here in the real world, we’d be thrilled with any warp. Is it possible?

The answer is yes, because of what I wrote earlier about solutions to the Einstein field equations. In 1994, inspired by watching Star Trek, Miguel Alcubierre, a college physics student at the time, published the first solution to the field equations that allowed for warp drive. It was a totally theoretical project, which Alcubierre has since abandoned. He doesn’t think it’s feasible technologically, because it requires something like all of the energy in the universe, or at least star-sized amounts of energy, and it also needs negative energy.

But a few scientists studying applied physics have tweaked Alcubierre’s theory in recent years, making the idea much more feasible, both in terms of the needed energy and in generating warp in a way that aligns with aspects of our current technological prowess.

First, the needed energy. Alcubierre’s original theory was based on the idea of compressing space ahead of the ship and expanding it behind the ship to create a bubble-like warp field whose walls would be thinner than the nucleus of an atom.

This, says Sonny White, director of NASA’s warp research program in Houston, is like trying to squeeze a wooden tabletop down to the width of a sheet of paper. “You couldn’t make the tabletop much thinner by squeezing it with your hand,” White says, since that would take more energy than your fingers could generate. “But you could squeeze it to be a nanometer or so thinner.”

Similarly, there are warp bubbles that would be much easier to achieve energetically than the one Alcubierre used in his calculations. The Alcubierre warp bubble has walls with a thickness on the scale of what’s called a Planck length (~1.62 x 10-35 meters), but if you increase the wall thickness up to a few hundred nanometers, meaning the size range of the wavelengths of visible light, it turns out that the energy requirement plummets.

And not only does the technology become more feasible from a quantitative standpoint (i.e. the amount of energy needed), but from a qualitative standpoint as well. “Not only does the thicker bubble wall mean that we’d need a lot less energy to generate the warp, but it also means we might do it with electromagnetic technology,” explains Eric Davis, a breakthrough propulsion physicist at the Institute for Advanced Studies in Austin, Texas. “And that’s precisely the kind of technology that we humans have developed.” Just think about that cell phone.

In other words, changing a few numbers in Alcubierre’s calculations makes warp at least thinkable in terms of doable technology. Based on similar tweaked calculations, White has also figured out that space can be softened to a certain extent, like changing the wooden table into foam, making it that much easier to compress. Another tweak, discovered by Davis, is that if the warp generator is pulsed, i.e. turned on and off really fast, that reduces the energy requirement further. And, by the way, even the need for negative energy that I mentioned earlier need not be a show-stopper, since there is a kind of negative energy — negative vacuum energy — that could be created by certain capabilities that we have, including lasers and a technology known as quantum optics.

Utilizing a quantum optics approach, the teams headed by Davis and White (the physicists, not the ice dancers) are thinking big, but taking careful baby steps. Explaining exactly what they’re doing requires a language of quantum physics, in which most interested readers (as well as writers) are not fluent, and that’s why you may have seen exaggerated stories, with illustrations of warp ships, suggesting that NASA already has the blueprints.

No, despite the beautiful drawings, there is no ship design. But what they’re doing is designing and modifying quantum optics devices to be able to detect minute warp effects from lasers and other technology. If this succeeds, the next step would be to track down whatever components of the devices produce the mini-warp effect and tweak the design so as to amplify that effect.

That’s a far cry from ships in the illustrations, or from the Enterprise, or even from Zefram Cochrane’s early primitive warp engines. Nevertheless, it could mean that we’re at least a little closer to Star Trek propulsion than you may have thought.

Forget Mars. Here’s Where We Should Build the First Off-World Colonies

How Advanced Are We Earthlings? A Cosmic Yardstick