How Can You Tell if a Volcano Is Restless? It's Complicated 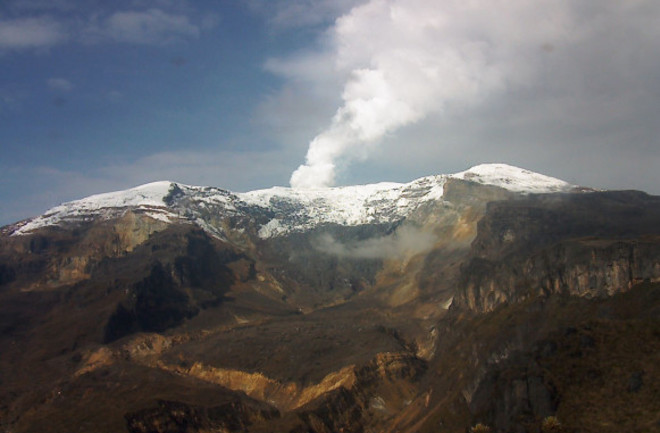 A steam plume from Nevado del Ruiz in Colombia, seen on April 23, 2014. Quantifying how intense is this unrest would the goal of the Volcanic Unrest Index. SGC Most of the time, volcanoes are quiet. When they do become restless, the people living around them are, understandably, interested in what that unrest might mean. Sometimes that unrest leads to an eruption that can impact people, property and economies on a local to global scale. Most of the time, the unrest will lead to nothing beyond a period where the volcano shows signs that something is happening deep beneath our feet. However, trying to tell people how severe the restlessness is and what level of concern you should have can be very difficult. Many volcano monitoring agencies try using volcanic alert statuses that get at how likely an eruption might be and in what timescales (months? days? hours?) Those alert statuses tend to be defined by volcanologists and seismologists for the monitoring agency who try to look at the data in hand of the unrest and project what they think the future might hold. There is a problem with that model: it is mostly a qualitative assessment. We see signs of unrest like earthquakes, increasing gas emissions, deformation of the volcano's surface, increased temperature at hot springs -- all signs that things are heating up under the volcano. That heat likely means that new magma is making its way closer to the surface, but that magma may or may not erupt. Volcano monitoring scientists will look at past activity at the volcano (or volcano's like it) and try to place a level of concern. Yet, no fixed international model exists to say that one country's Level 2 (or yellow or moderate) alert means the same as another country's (or another country's).

The criteria for defining the VUI of a volcano. Click on the image to see a larger version.

Potter and others (2015), Bulletin of Volcanology.

Enter the idea of a Volcanic Unrest Index (VUI). In a recent paper in Bulletin of Volcanology by Sally Potter and other geologists for New Zealand's GNS Science, they have attempted to develop a streamlined worksheet that using semi-quantitative data of various forms of unrest (see above) to calculate a level of unrest on the VUI, from 0 (no unrest) to 4 (heightened unrest). New Zealand is filled with volcanoes that show various signs of unrest on a regular basis and many of these volcanoes are in the middle of populated area or are popular tourist destination. Being able to clearly articulate to the public what is the level of unrest based on a fixed set of simple parameters would be very useful to better communicate volcanic risk. It doesn't imply that volcanologists know exactly what will happened, but rather gives people a sense of just how restless things are. The VUI using a whole suite of different parameters that fall into three broad categories: local earthquakes (near the volcano), local deformation and geothermal systems/degassing. These cover the main ways that new magma rising under a volcano might manifest at the surface. Increasing earthquakes and a change to the types of earthquakes that suggest magma movement, but in the VUI, the number and longevity of these events can be used to rank how much unrest there is. Same can be said for changing in the elevation of the volcano's surface as magma causes it to inflate or increases in carbon dioxide emissions. Trying to create a matrix that matches different parameters all for a VUI for the volcano. Now, you need to think about the time scales of unrest, because some volcanoes are likely almost always at a low level of unrest, so where do you start counting new unrest? This allows you to try to determine if there is new unrest going on or merely small changes in the background. As with all scales, determining what is expected versus what is unexpected -- and over what range of time and space is important. However, the end result is the same: a numerical value for how much unrest is occurring. Think about it like know the category of a hurricane -- people need to know if the hurricane is category 1 or category 4 as to better prepare for the potential impact. If you're living near a volcano, a VUI of 1 would mean a different level of preparedness than VUI 3. Specific values of unrest would be valuable for mitigation and hazard planning for communities, so that everyone knows and understands the scale at which unrest is discussed. Hopefully, the VUI catches on with volcano monitoring agencies worldwide so that we can discuss what is going on at these volcanoes with the same language and understanding of what is happening. Volcano monitoring and hazard planning has come a long way in the past 30 years, but clear communication of volcanic hazards and unrest might be the next big step needed to keep more people safe from volcanic danger.