Our home galaxy is bigger than previously thought. 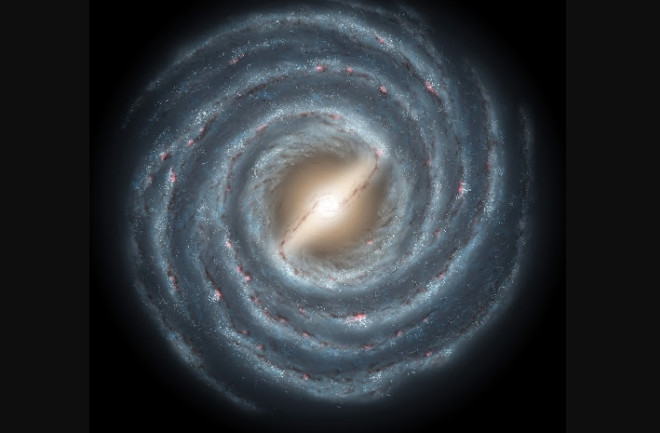 An artist's concept of the Milky Way Galaxy. (Credit: NASA)

The Milky Way is Earth’s home galaxy, the stellar city in which we reside. It’s hefty, containing a few hundred billion stars. And it’s so spacious that, even traveling at the speed of light, it would take more than 100,000 years to get from one side to the other. (It’s Frisbee shaped, though; so, from top to bottom, you could drive through on a shorter, thousand-light-year jaunt.)

Recent research has doubled the Milky Way’s span to perhaps 200,000 light-years, showing that while the population of stars grows less dense in our galaxy’s outer rim, a gauzy scattering stretches well past what scientists had previously observed.

Between the stars are giant pillars of gas and dust, and at the center of it all lurks a black hole weighing 4 million times the mass of our sun.

Read More: Getting to Know Our Galactic Home: The Milky Way

The Milky Way also contains more mysterious stuff. Much like the rest of the universe, something like 85 percent of the Milky Way’s mass is taken up by invisible dark matter, detectable only by its gravitational sway. Add it all together, and the Milky Way — with its few billion stars — ends up clocking in at roughly 1.5 trillion times the mass of our sun.

Yet from another, more cosmic perspective, you could argue that the Milky Way is fairly unimpressive. Our nearest full-sized galactic neighbor, Andromeda, is twice as large (though the two galaxies have about the same mass). And the universe contains galactic leviathans like IC 1101, which contains some 100 trillion stars and stretches 4 million light-years across.

Editor's Note: This story was updated to clarify that about 85 percent of the universe is suspected to be made of dark matter.