How Big is the Biggest Possible Planet?

If it gets big enough, it starts smashing atoms together. 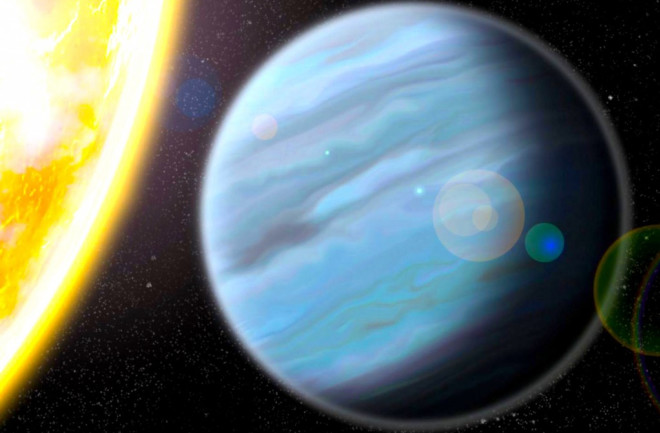 KELT-11b, one of the physically largest objects known, is 40 percent wider than Jupiter and has the density of styrofoam. (Credit: Walter Robinson/Lehigh University)

Last week, a team of astronomers reported the first potential discovery of an exomoon — a satellite orbiting a planet around another star. Part of what is so striking about the report is the scale of this possible planet-moon system. In this case, the “moon” appears to be about the size of Neptune; the planet it orbits is some 10 times the mass of Jupiter, or about 3,000 times the mass of Earth!

The system pushes at the limits of how we normally categorize objects in space and invites questions about where we stand in the scale of things. What is the biggest possible planet? Viewed through the full range of possibilities, is Earth a big planet or a small one?

There are two ways to come at the question, depending on what you mean by “big.” If you think of the size of a planet in terms of mass, then there is a specific but rather technical answer. Planets are defined as bodies that do not generate their own energy from nuclear fusion. Any planet more than about 13 times the mass of Jupiter (4,000 Earth masses, roughly) generates enough heat and pressure in its core to trigger limited fusion reactions of deuterium, a heavy isotope of hydrogen. At that point, the object is considered a brown dwarf instead of a planet.

The nuclear-ignition boundary between planet and brown dwarf is based on hidden interior processes, however, and it is not at all obvious from the outside. The critical mass for fusion also depends on on the mix of elements inside the object. For a plausible range of compositions, the cutoff point could be anywhere from 11 to 16 times the mass of Jupiter. If you want the full hairy details, they are here.

Outside of that gray zone, though, things turn fairly black-and-white. Anything well below the lower limit of 11 Jupiter masses (3,500 Earth masses, give or take) is indisputably planetary. Anything well above that high end, on the other hand, is definitely capable of creating some energy of its own and no longer fits the standard astronomical definition of a planet.

But there’s also a more literal take on the question: Is there a limit on how physically large a planet can be? Here there is a definite and rather surprising answer. Jupiter is 11 times the diameter of Earth, and it turns out that is about as large as any planet can be! If you kept dumping more matter on Jupiter, it would not get any larger. Instead, gravity would crush its mass together more tightly and efficiently.

Through the whole range from a Jupiter-mass planet to the brown dwarf boundary, all the way up to the lowest-mass dwarf stars (about 70 times the mass of Jupiter, the point at which sustained lithium and hydrogen fusion occurs), the size barely budges. All of these objects are within about 15 percent of the same diameter. That constancy has some odd consequences.

Take, for example, the star Trappist-1A, which was in the news recently because it has seven Earth-size planets orbiting it. Trappist-1A is a red dwarf, just 1/2000th as bright as the sun, but it’s genuine star, no question. It is powered by steady, sustained nuclear reactions that will burn for a trillion years or more. It is 80 times as massive as Jupiter.

Although Trappist-1A is sustaining fusion reactions, it is doing so at such a low rate that the outpouring of energy barely props up the star’s bulk against the pull of gravity. Even more extreme is the red dwarf star EBLM J0555-57Ab, recently measured to be 15 percent smaller than Jupiter, about the size of Saturn. It is the tiniest known mature star (as opposed stellar cinders like white dwarfs or neutron stars), and it is 17 times the density of lead–188 times the density of water!

There are some notable exceptions to this pattern. Some planets that orbit extremely close to their stars get overheated and puffed up to abnormally large diameters. The ‘styrofoam’ exoplanet KELT-11b is 40 percent larger than Jupiter despite having just 1/5th the mass. HD 100546bn is about 7 times the diameter of Jupiter, which would make it the largest-size planet known, but with some caveats: It appears to still be forming, and the current observations leave a lot of uncertainty about its nature. It may actually be an infant brown dwarf.

Outside of such outliers, the pattern is ironclad. As planets get more massive, they don’t get physically larger. They just get much, much more tightly packed, until they ignite and are no longer considered planets at all.