Since confirming the existence of ripples in the fabric of space-time some five years ago, the LIGO/Virgo collaboration has advanced gravitational-wave research by leaps and bounds. 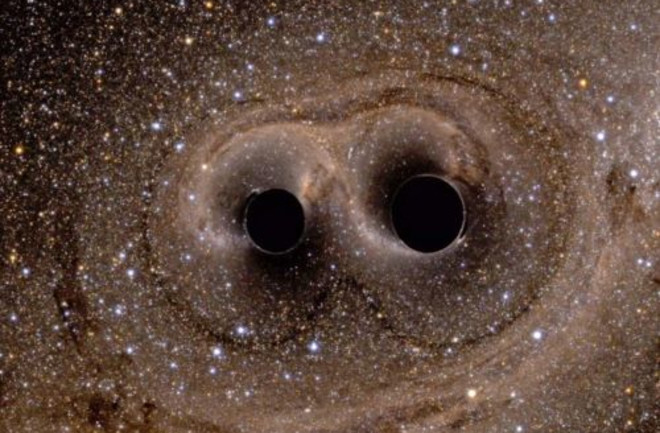 An artist’s illustration of two black holes coalescing. As they collide, the two black holes produce gravitational waves that ripple through the fabric of space-time. (Credit: National Science Foundation)

Over 100 years ago, Albert Einstein published his general theory of relativity, laying the foundation for our modern view of gravity. Einstein proposed that massive objects can warp the fabric of space-time, with the heaviest, densest objects, such as stars and black holes, creating deep “gravity wells” in the fabric. And much like a donated penny rolls along a curved path when it’s dropped into a charity well, Einstein realized that when light passes through a gravity well, the photons' paths likewise get deformed.

But that’s far from all that Einstein’s theory predicted. It also suggested that when two very massive objects spiral toward each other before colliding, their individual gravity wells interact. And as two whirlpools rotating around each other in an ocean would send out strong ripples in the water, two inspiraling cosmic objects send out ripples across space-time — known as gravitational waves.

Despite Einstein’s prediction of the existence of gravitational waves, it wasn’t until 1974 — nearly 20 years after his death — that two astronomers using the Arecibo Observatory in Puerto Rico found the first indirect evidence of gravitational waves. But It was another four decades before scientists found direct proof of them. On September 14, 2015, the Laser Interferometer Gravitational-wave Observatory (LIGO) detectors in Hanford, Washington, and Livingston, Louisiana, both captured the telltale “chirp” of gravitational-waves, generated when two black holes collided some 1.3 billion light-years away.

With this first detection of gravitational waves, astronomers proved the existence of an entirely new tool that they could use to explore the cosmos, ushering in an era of multi-messenger astronomy that will help them answer the biggest lingering questions in astrophysics and cosmology.

How Do We Detect Gravitational Waves?

Both LIGO and its sister facility, Virgo, take advantage of the fact that, as gravitational waves pass through Earth, they slightly expand and contract the space-time we live in. Thankfully, these passing gravitational waves are imperceptible to our human bodies, but the detectors of LIGO and Virgo are sensitive enough to pick them up. In fact, the gravitational waves from LIGO’s first detection only scrunched space-time by a distance of about 1/1,000 the size of an atomic nucleus.

So how was LIGO even able to detect such a small fluctuation?

The LIGO facility in Livingston, Louisiana, and its twin in Hanford, Washington, each have two interferometer arms 2.5 miles (4 km) long. (Credit: LIGO)

The LIGO and Virgo collaboration use a (slightly altered) device first invented in the 1880s. This device, better known as a Michelson interferometer, has a unique L-shape. For LIGO and Virgo, this familiar shape was blown up to a much larger scale than ever seen before.

Each of LIGO’s arms is 2.5 miles (4 kilometers) long. Meanwhile, each of Virgo’s arms is under 2 miles (3.2 km) long. Every one of these arms contains two mirrors — one at the beginning of the arm, and one at the very end. In LIGO’s case, once a beam splitter sends light into each perpendicular arm, it gets bounced back and forth between mirrors some 300 times, traveling a total distance of nearly 750 miles (1,200 km). This extended travel path, combined with the resulting laser light buildup, increases the sensitivity with which LIGO and Virgo can detect passing gravitational waves.

After the split light repeatedly bounces back and forth within each arm, the two beams then pass back through the beam splitter into a photodetector. And if a gravitational wave passes through while the two light pulses are bouncing back and forth within each perpendicular arm, the space-time within the detector arms would be disproportionately distorted. In other words, the light bouncing around in one arm would travel a slightly different distance than the light bouncing around in the other arm, and LIGO and Virgo can pick up the tiny discrepancy.

This diagram shows the layout of the LIGO in Hanford, Washington. By making laser light travel up and down the arms and interfere with itself, scientists can deduce minute changes in the light’s path from a gravitational-wave encounter. (Credit: Astronomy: Roen Kelly)

The initial LIGO facilities operated from 2002 to 2010 with no gravitational-wave detections. After 2010, LIGO underwent several years of upgrades and began observing again as Advanced LIGO in 2015. Likewise, Virgo underwent similar upgrades beginning in 2011.

Since LIGO’s first detection in 2015, the Advanced LIGO and Virgo collaboration have detected some 50 confirmed gravitational-wave events, as well as many more candidate events. The observatories’ first run started in September 2015 and ran through January 2016. The second observing run went from November 2016 to August 2017. And the third run was split into two parts, with the first half stretching from April 2019 to September 2019. The second half began in November 2019, but its remaining timeline is currently uncertain due to the COVID-19 pandemic.

Scientists have spent their time between each run performing routine maintenance and upgrading the detectors. And the most recent enhancement before the third run promised near-daily detections of gravitational-wave events. Despite the current shutdown, LIGO/Virgo collaborations have already detected over 50 new merger candidates during this latest run, fulfilling that promise.

So, What Have We Seen?

Besides proving that we can detect previously inaccessible ripples in the fabric of space-time, the first LIGO/Virgo run determined that at least three signals came from binary black hole mergers. Then, in August 2017, the collaboration detected the first gravitational waves produced by colliding neutron stars.

Over the past few years, LIGO and Virgo have steadily spotted more and more binary black hole mergers. And in late 2019, they picked up a possible merger between a black hole and a neutron star, an event that has never before been witnessed. “If it holds up, this would be a trifecta for LIGO and Virgo — in three years, we’ll have observed every type of black hole and neutron star collision,” David H. Reitze, executive director of LIGO, said in a LIGO press release.

This year, the collaboration observed its second neutron star collision, as well as another potential first for the group: a light flare thought to be associated with the gravitational-wave detection of a binary black hole merger. The pair of stellar-mass black holes were likely orbiting their galaxy’s central supermassive black hole, which is also shrouded by a swirling disk of gas and dust. Once the binary black holes merged, they started careening through the supermassive black hole’s disk. And as it plowed through the gas, the surrounding material flared up.

“[T]he timing, size, and location of this flare was spectacular," said co-author Mansi Kasliwal, in a statement to Science Daily. "If we can do this again and detect light from the mergers of other black holes, then we can nail down the homes of these black holes and learn more about their origins.”

An artist’s impression of a supermassive black hole surrounded by a disk of gas. Within this disk lies two smaller black holes that are merging. The resulting black hole plowed through the gas, possibly creating a light flare. (Credit: Caltech/R. Hurt (IPAC))

And as a cherry on top, the collaboration has even captured the merger of a black hole with a second confusing object — one that falls firmly in the observational “mass gap” separating a large neutron star from a small black hole. The heaviest known neutron star is 2.5 times the mass of the Sun, while the lightest known black hole is about 5 solar masses. The strange object in this merger apparently has a mass of 2.6 solar masses.

"We've been waiting decades to solve this mystery," Vicky Kalogera, an astronomer at Northwestern University, said in a LIGO press release. "We don't know if this object is the heaviest known neutron star, or the lightest known black hole. But either way, it breaks a record."

What’s Next for Gravitational Waves?

In 2024, LIGO will get yet another upgrade that will almost double its sensitivity, as well as lead to a seven-fold increase in the volume of space it can monitor. Later in the decade, scientists and engineers plan to kick off the third-generation of LIGO: LIGO Voyager.

Many other countries around the globe are also joining the international hunt for gravitational waves. For instance, India hopes to join the Advanced LIGO collaboration by the mid-2020s.

And looking even further into the future, by the mid-2030s, the European Space Agency and NASA hope to launch the Laser Interferometer Space Antenna (LISA), the world’s first space-based gravitational wave detector. LISA would open the door for detecting a much more varied sampling of gravitational-wave sources than LIGO and Virgo can currently pick up. The European Union is also exploring the possibility of an underground gravitational-wave detector known as the Einstein Telescope.

So whatever the future may hold for gravitational-wave science, one thing is for certain: Yet another confirmation of Einstein’s general theory of relativity — the detection of gravitational waves — has finally provided an entirely new way for astronomers to explore the cosmos.

Cassiopeia A and the elements lurking within it