Physicists have extended the conditions in which life can exist further than ever before. 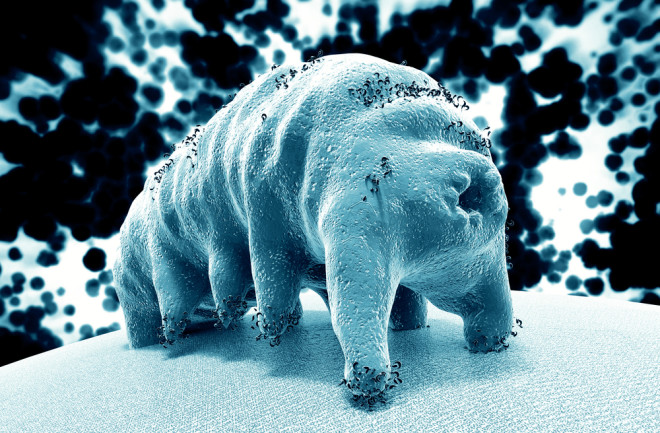 In recent years, evidence has emerged that quantum physics seems to play a role in some of life’s fundamental processes. But just how it might do this is something of a mystery.

On the one hand, quantum phenomena are generally so delicate that they can only be observed when all other influences are damped – in other words in carefully controlled systems at temperatures close to absolute zero. By contrast, the conditions for life are generally complex, warm and damp. Understanding this seemingly contradictory state of affairs is an important goal.

So physicists and biologists are keen to explore the boundaries of these very different regimes—life and quantum mechanics—to better understand where they might overlap.

Now Rainer Dumke at the Nanyang Technological University in Singapore and colleagues have created an exotic quantum state called entanglement using a superconducting qubit and a microscopic animal, called a tardigrade. Along the way, the team have created the most extreme form of suspended animation ever recorded. “The tardigrade itself is shown to be entangled with the remaining subsystems,” they say.

Tardigrades are well known to be capable of surviving extreme conditions by entering a state known as cryptobiosis. This is induced when the animal is frozen or desiccated and the creature enters a state of low metabolic activity called a tun. When the temperature rises and water becomes available again, the tardigrade revives, usually in just a few minutes.

To perform their entanglement experiment, Dumke and co cooled their tardigrade to below 10 millikelvin, almost to absolute zero, while reducing the pressure to a millionth of that in the atmosphere. In these conditions, no chemical reaction can occur so the tardigrade’s metabolism must have entirely halted stopped and the processes of life halted.

“This is to-date the most extreme exposure to low temperatures and pressures that a tardigrade has been recorded to survive, clearly demonstrating that the state of cryptobiosis ultimately involves a suspension of all metabolic processes given that all chemical reactions would be prohibited with all its constituent molecules cooled to their ground states,” say the researchers.

The experimental set up consisted of two superconducting capacitors, which when cooled can exist in a superposition of states called a qubit. They placed the tardigrade between the capacitor plates of one qubit so that it became an integral part of the capacitor. The team were then able to measure the effect of the tardigrade on the qubit’s properties.

Next, they entangled this qubit with its neighbor so that the entire system became a single quantum object. In other words, the tardigrade was entangled with its immediate environment.

“We observe coupling between the animal in cryptobiosis and a superconducting quantum bit and prepare a highly entangled state between this combined system and another qubit,” say Dumke and co.

Finally, having been in cryptobiosis for over two weeks, the team slowly warmed up the tardigrade while re-introducing it to ordinary atmospheric pressure. “The animal is observed to return to its active form, setting a new record for the conditions that a complex form of life can survive,” say the team.

That’s interesting work that pushes the conditions for life to new limits and shows how quantum effects might be introduced.

However, the work does little to show how quantum physics might be involved in the processes of life—the complex chemistries and molecular motions and so on.

Nevertheless, it is undoubtedly a steppingstone to more ambitious goals, say the team. “Our work provides a first step in the exciting direction of creating hybrid systems consisting of living matter and quantum bits.”

Ref: Entanglement Between Superconducting Qubits And a Tardigrade : arxiv.org/abs/2112.07978