How A Giant Eagle Came To Dominate Ancient New Zealand

Before the formidable bird went extinct, scientists say, it likely hunted the islands’ flightless moa. Now evidence suggests the eagle was part of a wave of feathered invaders, and its story holds lessons for today and the future. 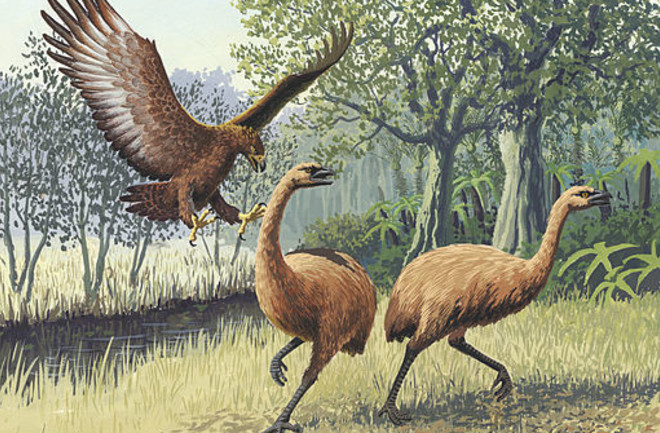 New Zealand has long been known as a place for the birds — quite literally. Before people arrived 700 years ago, the archipelago hosted an idiosyncratic ecosystem, nearly free of mammals. More than 200 bird species filled a food web all their own. Rather than cows or antelopes, there was a family of flightless birds known as moa. And in place of apex predators like tigers, New Zealand had Haast’s eagle.

Ever since a group of farm workers drained a swamp in the late 1860s and uncovered its buried bones, this eagle has captivated researchers. Julius Haast, the explorer and geologist who published the first notes on the species, described it as “a raptorial bird of enormous dimensions.” Today, biologists estimate that the eagles weighed up to 33 pounds — roughly 50 percent more than any raptor known today. But with a wingspan of only two to three meters — just beyond the range of a bald eagle — this was an oddly proportioned bird.

The shape of Haast’s eagle was one of many puzzles that scientists faced as they studied this long-extinct species, preserved in just a few skeletons, plus scattered bits and pieces. For nearly a century, there was a debate over whether such a large bird could fly; even after that feud was settled, questions remained about whether the bird was capable of killing moa, which in some cases would have been more than 15 times larger than the eagle itself. Now, new scientific techniques, combined with a clearer understanding of New Zealand’s geological history, has placed the Haast’s eagle amid a much larger ecological discussion: how species comes to “invade” new territories.

Scientists now believe that this superlative bird was one in a wave of feathered invaders that conquered New Zealand over a relatively short period. And this was not the only wave of invasions. Haast’s eagle — despite being gone for centuries — has revealed that we live in a much more connected world than we once thought, says biologist Michael Knapp of the University of Otago, who has studied the eagle. If such seemingly isolated islands have repeatedly attracted so many incoming species, he says, then “natural invasions” must be a major force in ecosystems across the world.

New Zealand has always held an important place in scientists’ understanding of extinction. When Western scientists first encountered moa, the idea that species could go extinct was just a few decades old. Their skeletons soon became a hot commodity. “You could pretty much name your price,” says paleobiologist Paul Scofield, senior curator at the Canterbury Museum in Christchurch. “It was really what enabled our museum.” Haast himself launched the museum and assembled its initial collection by exchanging moa fossils for various other archeological and zoological curiosities.

New Zealand retained unusual species — including, famously, the flightless kiwi. Combined with these extant oddballs, the moa fossils helped to establish the idea that New Zealand was a lost world, a place where ancient creatures, sheltered by distance from the rest of the world, managed to survive mass extinction events. Later geologists confirmed that these rocky islands had once been a part of a supercontinent they called Gondwana, but split away about 80 million years ago. In 1990, a television series described New Zealand’s islands as “Moa’s Ark,” popularizing the catchy name of the long-held model of how its bird-filled ecosystem came to be.

By the end of the 1990s, though, scientists realized that there was a period during the Oligocene, about 25 million years ago, when geologic and climatic changes might have put all of New Zealand underwater. Such a flood would have wiped out most — if not all — of the islands’ species. The theory, which became known as the “Oligocene drowning,” met resistance from some scientists, launching a heated debate over just how much land was covered.

Fortunately, new technologies were emerging to answer that question. Scientists began to extract and sequence DNA from fossils; this meant researchers could compare ancient DNA to modern genomes and create family trees of the evolutionary relationships between living and extinct species. Such “phylogenies” could roughly pinpoint when two species split apart from their common ancestor — data useful in settling the fight over New Zealand’s geological history.

In 2005, a team of scientists published a paper that compared DNA sequences extracted from two Haast’s eagle fossils to the genomes of 16 modern eagles. The scientists ascertained that the great lost bird’s closest living relatives included Australian species, as expected. The genomic data suggested that the family tree had split within the past few million years. Subsequent analysis has put the divergence time around 2.2 million years ago.

Score one for the Oligocene drowning hypothesis: The eagle appeared to have arrived after the time of the proposed submergence. But later analyses of several other New Zealand species showed divergence times on the order of tens of millions of years. Some species had persisted through the Oligocene, then.

By 2014, geological evidence had convinced most scientists: Yes, much of New Zealand had drowned, but small slivers of land — perhaps 20 percent — had remained above water. While a few of the islands’ species date far back to Gondwana, many others, including Haast’s eagle, were newer arrivals.

But the genetic analysis had revealed a new mystery — one that scientists hadn’t even thought to contemplate. Scientists had often compared the extinct bird to the wedge-tailed eagle, the largest extant raptor in Australia. It was an obvious candidate for the eagle’s closest living relative. Instead, the genes showed a closer link to the booted eagle and the little eagle, species that both weigh around 2 pounds. (The little eagle, as its name implies, is one of the smallest species of eagle alive today.)

(Credit:M. BUNCE ET AL / PLOS BIOLOGY 2005/ Knowable Magazine) Biologists were surprised to learn that the little eagle, which weighs a mere 2 pounds, is among the Haast’s eagle’s closest living relatives. A comparison of the birds’ claws shows the drastic difference in size.

This discovery suggested that Haast’s eagle had made a gigantic leap in size from its closest relatives: a 15-fold increase in just 2 million years. That’s a “staggering” rate of change, as Knapp put it in a recent paper. Rapid changes in size have been observed in dogs, but that’s a process driven by human selection. Knapp says he knows of no other instance where natural selection led to such substantial growth over such a short period. It is possible that all three eagles share a not-yet-known ancestral species whose size lay somewhere in the middle; its descendants could have morphed in different directions. But Knapp thinks this scenario less likely. The first wayward eagles, blown across the Tasman Sea in a day-or-two journey from Australia, would have landed in conditions that favored ever-larger birds.

Knapp notes that other raptors, perhaps owls or falcons, could have fed on the islands’ smallest birds. But there were plenty of moa running around, ranging in size from turkeys to ostriches — too big to be picked off by most raptors. “That’s huge amounts of meat that isn’t taken,” Knapp says. Such a scenario would have quickly selected for the largest eagles, who would have had the easiest time consuming such prey.

Knapp is now turning toward the smallest scales of this mystery: By comparing the genomes of various eagle species, he wants to identify precisely which genes changed to facilitate the rapid growth of Haast’s eagles. “Finding out how that works on the molecular level, that’s really the next step,” he says.

Another bird in hand

Already, though, the eagle genetics have helped to deepen our understanding of New Zealand’s ecological history. A second extinct New Zealand bird, known as Eyles’s harrier, is the largest known harrier in history. But it’s not just superlative size that makes this bird reminiscent of Haast’s eagle: The great harrier also appears to have evolved from a smaller bird. The closest living relative of Eyles’s harrier was nearly five times smaller, Knapp and colleagues reported in 2019. And the two harrier species appear to have split apart from their shared ancestor roughly 2.4 million years ago — relatively close to the divergence time of Haast’s eagle.

As Knapp was preparing to speak at a conference about this work, he became intrigued by the shared timing. So he looked for other examples of similar divergence times. “I found a lot of them,” he says. As he began to contemplate this “suspicious clustering,” as he calls it, his colleague Paul Scofield pointed out one more commonality: The recent migrants were all open-habitat species.

The two scientists, along with other colleagues, developed a hypothesis, which they published in 2019 in Frontiers in Ecology and Evolution: A wave of avian invaders arrived in New Zealand in a relatively short period, thanks to geological and climatic change that reshaped the islands’ habitat.

Around 10 million years ago, Australia began to grow arid. New Zealand, meanwhile, remained heavily forested — at least until 2.5 million years ago, when the ice ages began. Then large swaths of the islands cooled, causing glaciers to blossom atop New Zealand’s mountains and killing some forests. Suddenly, the islands featured extensive fields of grass: a brand-new habitat.

Knapp uses Haast’s eagle and Eyles’s harrier as case studies in a paper published in the 2021 Annual Review of Ecology, Evolution, and Systematics; these are illustrative examples of “natural invasions,” he thinks. Australian species cross the Tasman Sea quite often, but they typically struggle to compete against the islands’ existing species. But when cooler temperatures killed some forests, these new arrivals found a familiar ecological niche — one that no New Zealand species had yet evolved to fill.

This process was entirely natural, but it has implications for conservation. It’s well known that human beings can carry species across the globe — directly causing biological invasions. But the way that Haast’s eagle and Eyles’s harrier arrived suggests a more subtle role human beings can play: We too can alter habitat. We open and close ecological niches. By doing so, we can indirectly lure species into new geographies.

Much of New Zealand’s forest has been burned since the first people arrived, creating even more open habitat. Around half the islands’ bird species were wiped out after humans arrived in New Zealand — including Haast’s eagle and Eyles’s harrier — opening new niches. Now, history is repeating. Over the past several centuries, New Zealand has become home to the Australian bittern, the white-faced heron, the welcome swallow.

“The same thing that we see 2.5 million years ago is happening right now, again,” Knapp says.

The one thing that’s never mysterious about Haast’s eagle is what species wiped it out. Perhaps the eagles were hunted. Certainly, the moa were, which would be enough to doom the predator. “If you're evolving to fit a specific and very rare niche, then you have a hard time when that niche is gone,” Knapp says. One way or another, human beings take the blame.

So while you could take the recent wave of Australian immigrants as a reminder that ecosystems adapt — that life goes on as new species fill the gap — this story is also cautionary. Evolutionary history is full of strange twists and turns, but also dead ends.

Boyce Upholt is a writer and editor based in New Orleans. He’s currently working on his first book, which will explore how the Mississippi River has been altered and changed. Follow him @BoyceUpholt.