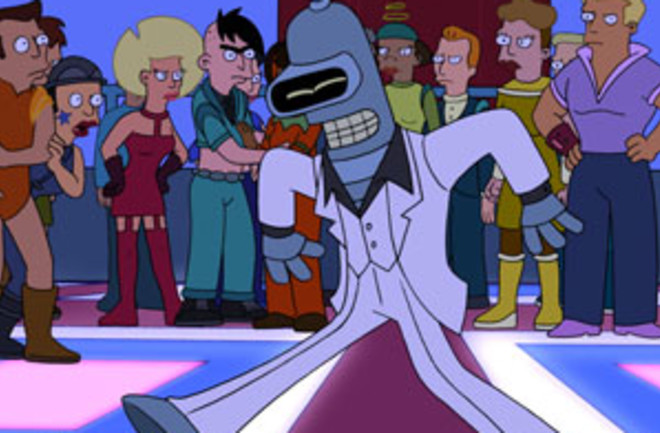 Bender: Back in the Groove

Robot-human intermarriage. The Harlem Globetrotters performing mathematical wizardry. Hearing “Good news, everyone!” when bad news is on the way. It all can mean only one thing: Futurama is back.

The interstellar travels of the Planet Express crew —canceled by Fox in 2003 but kept alive by syndication, straight-to-DVD movies, and the unstoppable force of geek fandom—are returning in 26 fresh episodes, 12 of which will run in the upcoming season.

Show developer David X. Cohen says that the resurrected series starts where it left off, using the first few seconds to extricate the crew from the crisis in which they found themselves at the last movie’s conclusion.

New episodes will feature time travel into the even more distant future, 31st-century Twitter, and, admittedly, more lapses in the laws of physics. But while science-savvy fans may get more fodder for fact-checking, Cohen, who holds a master’s degree in theoretical computer science, promises that the science in-jokes will return too. As Billy West—the actor who voices Fry, Professor Farnsworth, and others—puts it, “There are all kinds of symbols to the true faithful.”

Cohen and West say the Futurama movie projects, including Bender’s Big Score, kept them sharp for the return of the TV series. West says he can imagine the second run lasting as many years as the show was off the air. “It was too good to go away,” he says.

But how would they like living in Futurama’s less-than-perfect 31st century? For these two sci-fi fans, it’s a no-brainer. “It seems pretty awesome to me to hang out with a giant lobster and a girl with one eye,” Cohen says.

Through the Wormhole With Morgan Freeman Science Channel, beginning June 23

Nearly 14 billion years ago, the Big Bang propelled our universe from nothing to everything. Before that, there was no when or where. But was this truly the beginning? With Morgan Freeman hosting, the first episode of Through the Wormhole explores the time before time. Scientists such as Alan Guth, Neil Turok, and Paul Steinhardt tackle the question of what preceded the Big Bang, including the provocative idea that the cosmos is in an endless cycle, being re-created with one “bang” after another. -Bo Zhang

Made by Hand by Mark Frauenfelder (Portfolio)

Frauenfelder, the editor of MAKE magazine, delivers an ode to DIY that goes beyond how-to projects. He embraces the lifestyle of the hardy folk who helped him begin beekeeping, make his own espresso, and replace his lawn with a garden, all while not angering his wife—too much.

Don’t worry about climate change, overpopulation, and the other gloomy forecasts, Ridley argues. Science has raised the standard of living exponentially since the Industrial Revolution, and technological innovation—not eco-awareness or self-sufficiency—will continue to improve our lives.

Nonsense on Stilts by Massimo Pigliucci (University of Chicago Press)

A tour of solid science, shaky science, and pseudoscience, this crash course in critical thinking by biologist and philosopher Pigliucci includes handy rules for evaluating the confused public discourse on climate change, evolution, and even UFOs.

Barnum Brown by Lowell Dingus and Mark A. Norell (University of California Press)

These paleontologists write a rollicking recollection of Brown, a globe-trotting adventurer, sometime spy, and great dinosaur hunter who was the first to unearth T. rex. Field notes and personal letters capture Brown’s obsession with fossil collecting and his zest for, shall we say, extracurricular life. -Jen Barone, A.M.

MUSEUMSRace to the End of the Earth In 1911, rival explorers Roald Amundsen of Norway and Robert Falcon Scott of the United Kingdom raced across 1,800 miles of treacherous, icy terrain to be the first to reach the South Pole. This exhibit has assembled stunning photographs, paintings, and artifacts of their daring quests, conveying what it was like to travel to the coldest place on earth a century ago. Visitors can enter models of the explorers’ base camps and view a computer map of Antarctica outlining the ocean currents around the continent and the land masses and mountains that lie hidden beneath the ice. And if you think you have the daredevil spirit needed for such a harrowing journey, take the personality test modeled after those used for real expeditions to see how you might fare all alone at the far end of the world.