Astronomers have long suspected a city-sized neutron star hides within the dusty shroud of SN 1987A. And now, they’re closer than ever to proving their case. 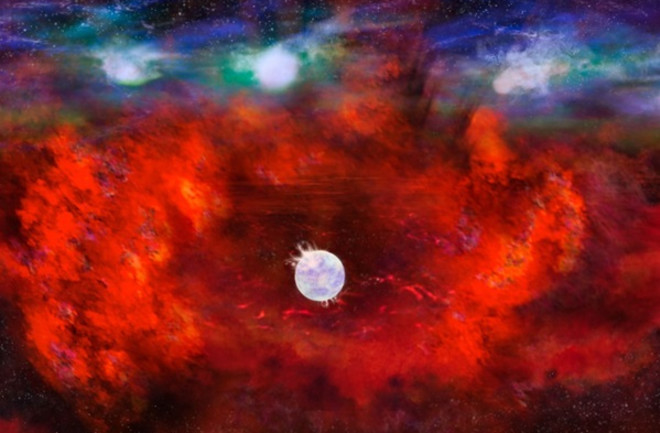 stronomers have found new, compelling evidence that Supernova 1987A harbors a neutron star (blue-white) within a newly imaged 'blob' of extremely hot dust (red), as seen in this artist’s concept. (Credit: NRAO/AUI/NSF, B. Saxton)

On February 24, 1987, an unexpected cosmic explosion rocked the astronomical community. Dubbed Supernova 1987A (SN 1987A), the fiery event — triggered by the implosion of a massive star — was the closest observed supernova to Earth since the invention of the telescope. It didn’t occur in our galaxy, though. SN 1987A self-destructed within the Large Magellanic Cloud, which is a satellite galaxy of the Milky Way that resides some 170,000 light-years from Earth. Nonetheless, SN 1987A was still so bright that naked-eye observers could see it for several weeks.

But the extraordinary sight of a nearby supernova lingering in Earth’s night sky isn’t the only thing SN 1987A bestowed upon us. It also gave astronomers an unprecedented opportunity to investigate what triggers supernovae, as well as how such powerful blasts ripple through their surroundings. In fact, we can see the shockwave from SN 1987A still speeding outward today, interacting with clouds of dust that encircle the original site of the cosmic explosion.4

However, an enduring mystery remains: What did SN 1987A leave behind? According to new research, the answer is likely a neutron star.

For quite some time, astronomers have assumed SN 1987A initially left behind a neutron star. That’s because a few hours before the supernova’s light reached us, they detected an influx of neutrino particles washing over Earth, as would be expected if a supernova erupted nearby. These nearly unstoppable particles zip straight through the dense material present during a budding supernova — unlike light, which gets held up for a bit. In fact, SN 1987A was the very first time scientists ever detected neutrinos from beyond our solar system.

But even though these neutrinos almost certainly came from the birth of a neutron star in SN 1987A, astronomers aren’t sure whether that neutron star lives on, or rather quickly collapsed into a black hole. And despite decades of monitoring the site, observers have yet to find convincing signs of a compact object lurking near the center of SN 1987A. At least, until now.

In a new paper published July 30 in The Astrophysical Journal, astronomers report they’ve found compelling evidence that SN 1987a is still harboring a neutron star, which would make it the youngest such stellar corpse yet known. (The previous record holder, called Cassiopeia A, is estimated to be about 330 years old.) The astronomers carried out the study using the Atacama Large Millimeter/submillimeter Array (ALMA) — a radio telescope in Chile that’s able to peer through obscuring dust. These new, extremely high-resolution images revealed a hot “blob” lurking in the core of SN 1987A.

The Atacama Large Millimeter/submillimeter Array (ALMA) captured high-resolution images to reveal a hot, slightly off-center “blob” (inset to left) within the core of Supernova 1987A. The material seen by ALMA in radio wavelengths is colored red and yellow. Hubble’s visible view is displayed in green, and Chandra’s X-ray view is shown in blue. (Credit: ALMA (ESO/NAOJ/NRAO), P. Cigan and R. Indebetouw; NRAO/AUI/NSF, B. Saxton; NASA/ESA)

However, the blob itself is not the neutron star. Because neutron stars compress about 1.4 times the mass of the sun into a sphere roughly 15 miles (25 kilometers) wide, they are impossible to see directly. Instead, the newly discovered blob seems to be a giant gas cloud that dramatically outshines its surroundings, and it’s located right where astronomers think SN 1987A’s neutron star should be.

“There has to be something in the cloud that has heated up the dust and which makes it shine,” explained coauthor Mikako Matsuura of Cardiff University in a press release. At its longest, the blob spans about 4,000 astronomical units — where one astronomical unit is the average Earth-sun distance — and it’s estimated to have a temperature of some 9 million degrees Fahrenheit (5 million degrees Celsius). “That’s why we suggest that there is a neutron star hiding inside the dust cloud,” Matsuura added.

This blob is not exactly at the center of SN 1987A, though; it’s slightly offset. But that’s not a bug in the theory, that’s a feature. Astronomers have long suspected that SN 1987A exploded asymmetrically, flinging more material in one direction than the other. Per Newton’s third law of motion, such an asymmetric blast would have “kicked away” the neutron star in the opposite direction at hundreds of miles per second. So, by simply calculating how far the neutron star traveled through space during the past 30-some years, the astronomers can predict its offset from the center of SN 1987A. As it turns out, it’s precisely where they found the blob in the ALMA images.

Now that astronomers have likely found the location of the neutron star within SN 1987A — and nicknamed it “NS 1987A” — the real quest for understanding can begin.

For starters, researchers really want to know whether NS 1987A is a pulsar, which is a neutron star that emits a powerful beam of radio radiation as it rotates. (Remember, all pulsars are neutron stars. But not all neutron stars are pulsars). While astronomers aren’t exactly sure what mechanism produces a pulsar’s radio jet, they think it’s related to factors like the star’s spin and magnetic field. But so far, astronomers haven’t detected any such radio pulses from the direction of SN 1987A. Plus, the blob’s current amount of energy doesn’t seem to allow for extra energy coming from pulses within.

To definitively determine whether NS 1987A is a pulsar or just a run-of-the-mill neutron star, astronomers must continue to refine the estimated mass and temperature of the blob. Then, by closely seeking out periodic variations in the blob’s brightness, they might be able to tie any flickers to the consistent rhythm of a pulsar within.

Until then, however, researchers are simply happy that a decades-old mystery about what lurks in the core of SN 1987A is likely laid to rest. But even so, you can bet astronomers won’t stop tracking the aftermath of the cosmic explosion anytime soon.