Richard Hoagland, perhaps long ago sensing failure in his "Face on Mars" scheme, started downplaying it in favor of the ridiculous (and easily debunked) "City" on Mars, which then led to his totally over-the-top dumbosity of hyperdimensional physics. All of this, of course, fits (although "jammed-in-to-make-it-fit" would describe it better) into his over-blown conspiracy theory that NASA is Doing Nefarious Things. RCH's latest silliness is a book called Dark Mission. In the book, he and his cohort Mike Bara are making the same tired and painfully silly claims that NASA is hiding evidence of alien bases on the Moon, artifacts on Mars, conspiracies that go All The Way To The Top, yadda yadda. He also has a website describing it. Now, if I were to make a website to promote a book, I would take some of the best bits of the book and put them on the site. Well, if the stuff on the site indeed represents the best examples from the book, I have to assume the rest of the book should have a toxic waste warning. It's so profoundly goofy that it's difficult to know where to start. Happily, Hoagland and Bara give me an excellent place to start debunking their goofiness: right on the very first page of the site. If you go to the Dark Mission website (WARNING: extreme danger for brain cells!), the first image you see is this one: 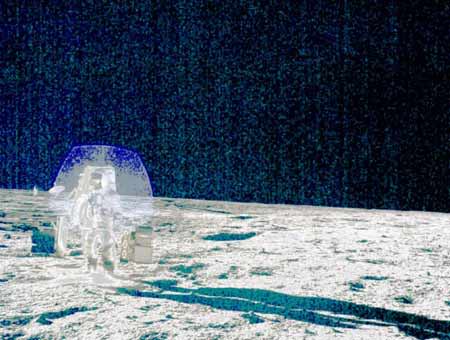 This image shows astronaut Al Bean from Apollo 12 carrying the ALSEP (Apollo Lunar Surface Experiments Package). Hoagland cranked the contrast way up to show fainter features. See the pentagonal-shaped glow around Bean? On his website, Hoagland claims that this is actually "a massive tier of 'glass-like ruins'", indicating -- in his mind -- that there is evidence of alien artifacts on the Moon. Bara makes this same ridiculous claim elsewhere. Ignoring for a moment the overwhelmingly obvious problem of being able to see the lines of the pentagon in front of the astronaut -- how massive can it be, if it's between Bean and Pete Conrad (who took the picture)? -- and also ignoring the obvious problem that this claim is bug-nut crazy, there is maybe a simple explanation. The Hasselblad cameras used on Apollo had an iris inside, much like the one in your eye. It can open and close an aperture to let in more or less light. Guess what shape that aperture was? Yup: pentagonal. That's no glass ruin. It's an internal reflection, inside the camera itself. Mind you, this is the very first picture on Hoagland and Bara's Dark Mission website. This gives you an idea of just how ridiculous this stuff is. They literally can't even get the first thing right.

Note added December 18: Some commenters below have noted that in the book, it's the vertical streamers in the background of the image that Hoagland and Bara cite as evidence for structures on the Moon (and also they do say the pentagon is an internal reflection). That is not at all clear from the page on RCH's site to which I link, but that's fine: the streamers are no more evidence of a structure than the pentagon is. Think of it: any structure bigger than a few hundred meters across is easily visible in a telescope, and it escapes me how a giant structure miles across would not have been seen hundreds of years ago by eager astronomers. Oh wait, it doesn't escape me: Hoagland and Bara are wrong, and are amplifying defects in the images well beyond what is reasonable. This is their standard MO for such things. I stand corrected on the pentagon, but I still say they are dead wrong on just about everything else. And as I note near the bottom of this page; Hoagland is capable of actual image analysis when it suits his cause, but then turns around and does the most ridiculous image manipulation when it suits him as well. I leave it to the reader to draw their conclusions about him from that.

I could go on (and on and on and on), but why bother? Hoagland and Bara, as usual, never come within a glancing blow of reality. Going through the website (gah, the things I do for you BABloggees) is a seemingly endless mind-numbing journey through antiscience claptrap and truly awful claims. Not that I need to tell anyone here, but reading it is likely to melt your brain. You'd be closer to reality watching a few hours of Jerry Springer. Did you know Hoagland and Bara actually held a press conference for the book? According to Dwayne Day at The Space Review, not only was it a flop, but it showed just how egregious these guys are. You should read Dwayne's article; it's great for a schadenfreude laugh or three. I'm quite sure Hoagland and Bara will do a tour, going to UFO conventions and psychic fares to peddle their bunkum, just as I am quite sure there will be an eager audience lapping it up. Nonsense never ends, my friends. Happily, though, the truth really is out there.