If large impacts ceased early in Mars’ history, that would leave plenty of time for life to have formed in its ancient oceans. 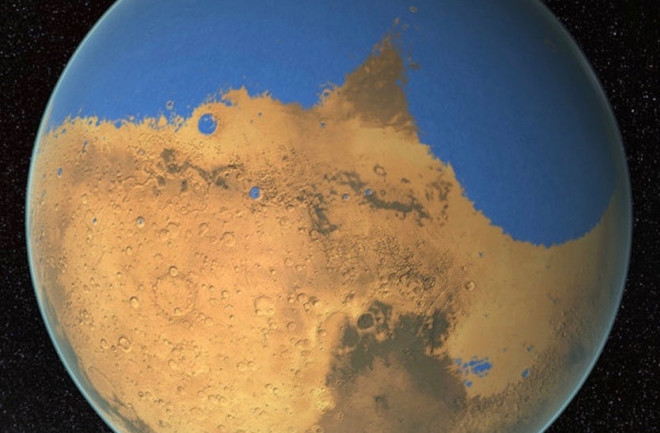 When the solar system was young, some scientists suspect it was too wild and raucous a place for life to develop. Earth, Mars, and the other planets were all being pelted by massive asteroids and rocky debris. Some of those rocks might have delivered the very water that later made life possible. But the unrelenting impacts may have made the surface too violent to sustain life.

Exactly when that period of heavy impacts stopped remains a topic of debate among astronomy’s solar system historians. But new results from Martian meteorites indicate that Mars had grown quiet by about 4.2 billion years ago, or about a half billion years before the first signs of life emerged on Earth. That might mean that Mars had enough time to develop life before it dried out in later years.

Researchers used meteorites for their study. They can never know for certain, since the meteorites were recovered in Earth’s Saharan desert, but by comparing them to what else we know of Mars, these particular rocks are thought to come from Mars’ southern highlands. The region is thought to hold some of Mars’ oldest crust samples. And these meteorites contain minerals called zircons, which are treasured by geologists as being a reliable way to measure the age and history of incredibly old rocks, back to billions of years.

Specifically, they can carry a record of pressure shocks, like what a rock feels if an asteroid slams into its home planet, and how long ago that event occurred. So the rocks carry a record of the event that launched them to space from Mars, at least 5 million years ago.

But they also carry a history of the time long before that, and that record is largely quiet. The researchers see little evidence for high-impact events that would have shocked the rocks more recently than about 4.5 billion years ago.

On Earth and the moon, however, similar analysis of zircons in the crusts of those worlds show that the majority of them, between 70 and 90 percent, have evidence of shocks. So it’s not totally clear whether Mars’ quiet impact history tells researchers anything about impacts in the inner solar system generally, or just for the Red Planet.

Debate has waged back and forth over whether the solar system underwent a period called the Late Heavy Bombardment, between about 4.5 and 3.8 billion years ago.

This research points to Mars being quiet throughout that period. If the last of the large impacts occurred 4.5 billion years ago, then Mars’ surface should have been habitable by about 4.2 billion years ago, once it had some time to cool off.

Mars is thought to have been a wet planet in its early days, but probably dried out by about 3.5 billion years ago – though some researchers think it might have been much more recent. But even if researchers use the more forbidding 3.5 billion year timeline, that still leaves about 700 million years when Mars was both wet enough and stable enough for life to form. That 700 million years is also longer than the time it took life to form on Earth. That’s a good sign for all the people hoping for signs of life – even long-ago life – on our neighboring Red Planet.