In my last blog entry, I made it pretty clear that I think young Earth creationism and its bastard child, Intelligent Design, are full of crap. The argument that people just want to give competing theories "equal time" in the classroom with real science is also garbage. When Bush said that, did he mean just ID? After all, there are lots of other creation myths out there. Why stop at just one that is provably wrong? I can think of dozens! But one stands out. Somehow, this one speaks to me. It certainly makes as much sense as creationism. Maybe more. Of course, I speak of Flying Spaghetti Monsterism. The logic is hard to deny: on that site there are graphics, drawings, even a mathematical plot (with numbers!) correlating the idea with pirates. I have a PhD and everything, and lemme tell you, that's a pretty impressive plot. At first, I didn't understand why this theory appealed to me. Then I saw the reasons to convert, and the first one really made sense: "Flimsy moral standards". I can't argue with that. 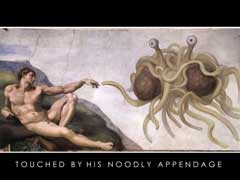 Also, on his page about FSM, the author, Bobby Henderson, wrote a letter to the Kansas School Board exhorting them to teach FSM to the students. He ends his letter thusly:

I think we can all look forward to the time when these three theories are given equal time in our science classrooms across the country, and eventually the world; One third time for Intelligent Design, one third time for Flying Spaghetti Monsterism, and one third time for logical conjecture based on overwhelming observable evidence.

Even with a belief as rock solid as FSM, it's still bound to create controversy. Some people will feel that it isn't scientific, which is of course correct. After all, as a scientist, I can't advocate teaching this in a biology or astronomy class. But if it has to be taught in school, then is should be taught in the class where it belongs: Home Ec.