The phenomenal HiRISE camera which snapped Phoenix beneath its parachute has now seen Phoenix sitting on the Martian surface. In fact, it sees the lander, the parachute, the back shell and the heat shield!

This is quite an extraordinary picture. The Phoenix lander is bluish and sits at the top of the field. You can see dust disturbed around it, no doubt from the exhaust of the landing thrusters as it descended. At the bottom is the bright parachute, and just above it is the back shell; the part of the apparatus that connected the parachute to the lander. To the right center is the heat shield, blackened by its fiery descent. It must have bounced when it hit, making the blurry splotch to the left of the better-defined shield itself. And, of course, zooms are provided. Looks like the back shell bounced a bit too, or was dragged a little by the parachute. 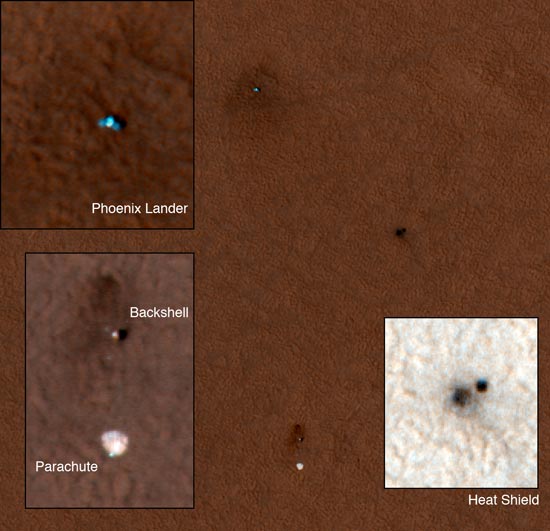 [edited to add: Oops! In the next paragraph, I got the descent path going the wrong way. In the comments, To Seek made a good point: the heat shield would still be moving rapidly when it was ejected from the lander, while the lander was slowing due to the drag from the 'chute. I forgot about momentum and which part of the lander was slowing! So the actual entry angle is from the upper left, moving to the lower right. Everything else is pretty much the same though.]

To my eye, it looks like the lander came in from the lower right upper left. The heat shield fell before the parachute was disconnected, then the lander landed. The winds must have been blowing roughly down and to the left a little, since the parachute was disconnected before the lander touched down as well. That's consistent with the shell being dragged a little bit toward the bottom of the picture. The scattered dust also seems to be blown down and to the left as well. I'm not sure why the heat shield would have bounced up and to the right, but maybe it hit a rock or a slight incline. Otherwise I'd expect it to be up below and to the left right of the blotch, along the ground track of the descent. Or I may be totally wrong here. :-) Edited to add: I was! For a sense of scale, the solar panels are about 5.5 meters (roughly 18 feet) tip to tip across the lander. That's about 22 pixels in this image. That puts the (approximate) distances of the parts from the lander as 50 130 meters to the heat shield, 100 250 meters to the parachute, and 90 230 meters to the back shell. So basically everything you're seeing here would fit comfortably inside a couple of football stadiums. Holy Haleakala. Well, I'll spare you the histrionics this time, and just say wow. Nice work HiRISE folks! And my sincere and heartfelt congratulations to NASA and everyone who worked on this amazing series of events!