High Radiation, Low Gravitation: The Perils of a Trip to Mars

Sunscreen and calcium supplements aren't enough to protect Mars-bound space travelers from radiation and a lack of gravity in outer space. 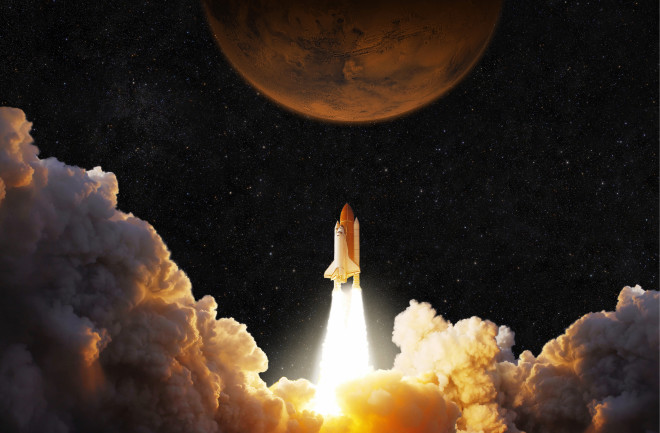 (Inside Science) — Back in May, SpaceX launched its Starship SN15 prototype to about the cruising altitude of a commercial airliner before landing it safely. The company claims future versions of the rocket will be able to take 100 passengers at a time to the moon, and even Mars.

But while it’s one thing to send a rocket to Mars, it’s another to send people there alive. And it’s yet another thing to make sure the people can be as healthy as they were when they left Earth.

Besides packing enough fuel and air and water and food for the seven-month-long journey to Mars (and more for a return trip if you want a return ticket), there are other luxuries we enjoy here on Earth that the spaceship will have to provide if we want to stay healthy during the long flight.

Earth’s atmosphere and magnetic field protect us from harmful space radiation, but passengers bound for Mars will lose that protection. So, their spaceship would need to provide some kind of radiation shielding.

Depending on where radiation comes from, it may be made of different particles and have different energies, which would require different means of shielding and pose different levels of danger to our radiation-prone DNA. For example, radiations from energetic particles ejected from the sun behave very differently than cosmic rays from outside our galaxy.

So, how many times more radiation would a Mars-bound astronaut experience compared to what they would experience on Earth?

Enough to be of concern, according to Athanasios Petridis, a physicist from Drake University in Des Moines. According to calculations by his team, high-end estimates for radiation exposure during a round trip to Mars are in the range of several Sieverts (Sv). For reference, the U.S. Nuclear Regulatory Commission has set 0.05 Sv/year as the dose limit for workers who are exposed to radiation at their jobs.

“There are enough competing factors in radiation exposure that trying to plan around the solar cycle is like trying to time the stock market, which usually results in losing,” said Kerry Lee, a radiation analyst from NASA in Houston, Texas.

The lack of gravity can also wreak havoc on the human body given enough time. Astronauts aboard space stations have been shown to lose 1 to 1.5 % of the mineral density in their weight-bearing bones every month. They also tend to lose muscle mass, even when exercising as much as they do on Earth.

“There are plenty of risks associated with space flight. I don’t think these are deal breakers for missions to Mars,” said Lee. “[NASA has] had several crew members do missions approaching a year in space. Also, there are countermeasures in place that have been proven to slow and stop the loss of muscle mass and bone density while in space.”

An undergraduate team of researchers from Drake University, with the project name of Magneto-Ionization Spacecraft Shield for Interplanetary Travel, or MISSFIT, is trying to calculate the tradeoffs among different engineering solutions for radiation shielding and artificial gravity.

“Say, if you want to create artificial gravity through rotation, you may want to make the radius of the spacecraft as large as you can, but the bigger the radius, the bigger the magnetic field you will need for radiation shielding,” said Petridis, the project leader for MISSFIT. “There’s always a tradeoff.”

The project aims to give undergraduate physics students valuable experience conducting original research. “We try to make it a very exciting project, and anything related to space travel is exciting,” Petridis said.

Without any mind-blowing sci-fi level breakthroughs, the only practical way to imitate gravity on a trip to Mars is by spinning the spacecraft and creating a centripetal force. (You could theoretically accelerate the spacecraft to mimic gravity, but that would mean throttling the rocket to provide the G-force before braking once past the middle point -- a completely impractical approach given the fuel requirement.)

For the centripetal approach, the larger the spin radius -- perhaps in the shape of a hoop -- the closer it would resemble the feel of the gravity on Earth. But it would also be more difficult to launch and may require assembly in space.

It will also be more difficult to provide enough radiation shielding for the larger structure.

“I mean, you can wrap the whole spacecraft in lead if you want to, but it's gonna be really heavy, and completely impractical,” said Keegan Finger, an undergraduate physics major from Drake University. “That’s why we are looking at magnetic shielding -- to try to save on weight."

Finger and his classmates discussed their progress on the project at the April 2021 meeting of the American Physical Society, held virtually this year due to the ongoing COVID-19 pandemic.

“We also need to consider what levels of radiation at what specific energies we need to shield from,” said Will Thomas, another physics undergrad working for the project. For example, what combination of physical shields, bodysuits, and magnetic field can best guard the astronauts from the different kinds of radiation in space.

The project is expanding to include biology majors to consider the effect of imitated gravity on the human body. The goal is to find a combination of strategies that can best minimize the overall health risk posed by deep space travel.

There can be subtle differences in the different ways of imitating gravity, for instance, regarding the intricate physics of our cardiovascular system.

“For example, what effects do the gradient of gravity and the Coriolis force have on blood flow?” said Petridis. “Look, we can handle the math and the computations, but as physicists, we have no idea how the cardiovascular system works, so we need this to be an interdisciplinary collaboration. Because that’s what real-world problems are, they are interdisciplinary.”