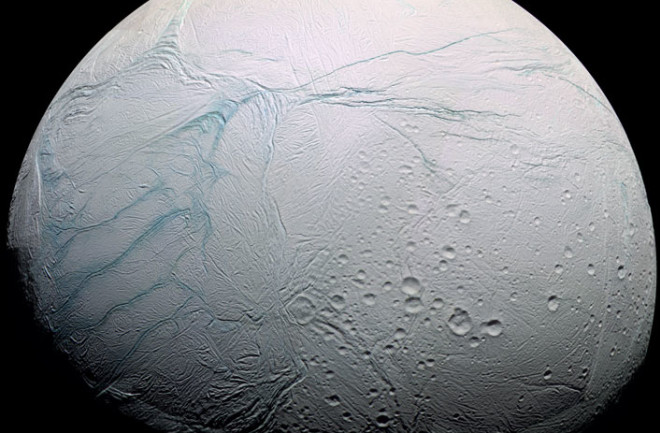 Credit: Cassini Imaging Team, SSI, JPL, ESA, NASA If you know anything about Enceladus, an icy moon in Saturn's tow, it's probably the amazing jets of water spurting off the satellite’s south pole. The image is one of the most stunning to come from NASA’s Cassini spacecraft, orbiting within the Saturnian system for 10 years — not just because it looks cool, but because it showed that tiny Enceladus, just over 300 miles across, could harbor interesting activity. Well that was just the start: new findings from Cassini indicate that Enceladus hosts a huge subsurface sea of liquid water beneath its south pole, possibly fueling those very jets.

The Cassini probe is pretty impressive. Not only does it have your standard space cameras to capture pretty pictures and important information, but the probe itself can measure a world’s mass distribution. The subtle variations of mass pull on Cassini with slightly different gravitational strengths, so scientists can learn about a body’s internal structure just by seeing what the probe does.

Scientists have found evidence of a large ocean of liquid water on Enceladus, squeezed between a rocky core and a thick sheet of ice. Credit: NASA/JPL-Caltech After three close flybys of Enceladus (within 62 miles, or 100 km), Cassini revealed something odd about the moon's south pole: It didn’t have enough stuff on the surface to account for the strong gravitational tug it exerted on the probe. Something else, almost certainly a subterranean ocean of liquid water, was accounting for that strong gravity. More specifically, the water is likely 18 to 24 miles down, trapped between a rocky core and an outer shell of ice. The findings appear in this week’s edition of Science.

Tip of the Ice Sheet

Only a handful of worlds (including our own) are known to have liquid water in any abundance, so the news is exciting purely on its own merits. But it’s also great to finally have a possible answer to what was fueling those impressive jets of water. Spewing out of long, unusual fractures on the surface nicknamed “tiger stripes,” the jets had led astronomers to suspect a possible subsurface reservoir, but with no evidence to prove it. With this data, not only do astronomers finally have evidence as to what might be feeding the jets, but they even know how widespread the water is — extending up to latitudes of nearly 50° in the southern hemisphere, making the ocean about the same size as Lake Superior. Which isn’t to say it’s all figured out, of course. Scientists suspect the tiger strips, jets and subsurface ocean might ultimately be the result of heating deep within the moon, as its core stretches and flexes during its approaches to Saturn. Exactly what’s going on, however — along with the nature of Enceladus’ water and whether it might be part of a habitable environment — will require even more data. Let’s hope Cassini doesn’t wait another 10 years before answering some of those questions.