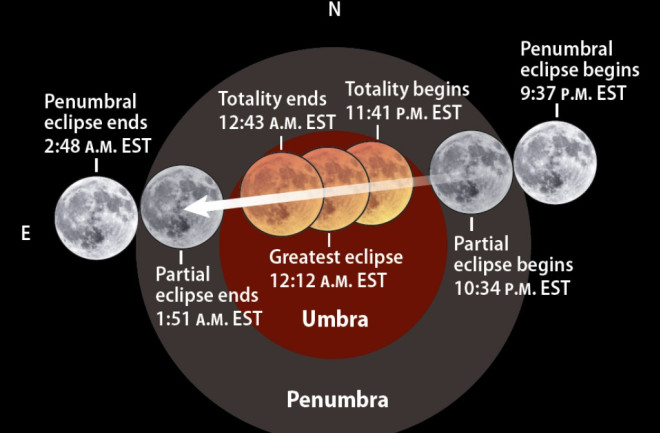 A total eclipse of the moon will be visible in its entirety across North and South America this weekend. For more than an hour the night of January 20/21, the colors from all Earth’s sunrises and sunsets bathe the Full moon in an ethereal orange glow.

As sunlight passes through Earth’s atmosphere, our blanket of air strips out the short-wavelength blues and yellows and leaves only the longer-wavelength oranges and reds. It is this light that reaches the moon a quarter of a million miles farther out in space. It’s as if a talented artist has brushed the moon with the warmer colors from her palette.

On the evening of January 20, the Full Moon rises as the sun sets. Its bright glow hides fainter stars. Only the bright constellations of winter — Orion, Taurus, Gemini, and Canis Major — stand out in the southern sky.

The eclipse begins unnoticeably when the moon enters Earth’s outer penumbral shadow at 9:37 p.m. EST. Over the next hour, the moon’s lower limb begins to darken. The effect should be obvious by 10 p.m.

The main partial eclipse begins when our satellite dips into the inner umbral shadow at 10:34 p.m. The shadow appears dusky gray at first, but as more of the moon sinks into the shadow, its orange color becomes noticeable.

As the eclipse progresses over the next hour, the moon slowly dims and the background sky blackens, slowly revealing a star-studded sky. Hanging in place of the once brilliant Full Moon is a stunning orange globe situated near the border between Cancer and Gemini.

Totality starts at 11:41 p.m., when the moon stands about 60° high across the central United States. (It’s a bit higher in the east and lower in the west.) The fainter stars of the winter constellations and the Milky Way now fill the darkened sky. To get the full impact, you’ll want to view the eclipse from under a dark sky.

Totality lasts 62 minutes, wrapping up at 12:43 a.m. The partial phases then play out in reverse. The umbral eclipse ends at 1:51 a.m., and the moon exits the penumbra unnoticeably at 2:48 a.m.

And, if your skies are cloudy but you’d still like to see the show, you can watch the eclipse livestream online here.