BABloggee Patrick Pricken alerted me to a new movie coming out soon... where pareidolia is real. 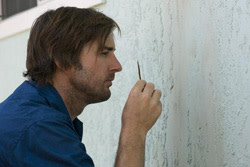 It's called "Henry Poole is Here", and it stars Luke Wilson as a sad sap whose life turns around when the face of Jesus appears on the side of his house. It looks like another in a long line of don't-trust-reality-instead-put-your-faith-in-something kind of movies. I can already predict with some certainty that in the end there will be an ambiguous scene where you don't really know if it's Jesus, or if people use the stain as a catalyst to open up their own inner power. Either way, feh. I'd rather see a movie where some kid isn't doing well in science class because his parents think the Universe is 6000 years old. Then he sees an online interview with Brian Cox about the Large Hadron Collider and is inspired to make it his life's work to understand why gravity works. In the end, he does, and finds out that the Universe is filled to overflowing with the wonder and beauty of nature. I'll be waiting a long time for that movie.