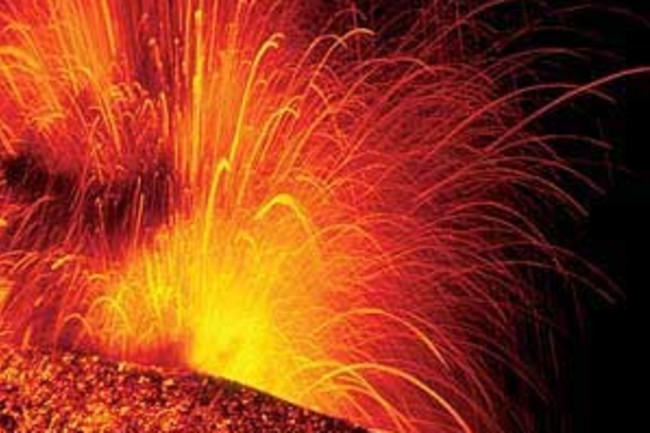 This year I had the privilege of having one of my pictures of volcanoes be included in the 2012 IAVCEI Volcanoes Calendar. If you've never seen the calendar, it is 12 months of gorgeous volcano images of all scales and activity - something that any volcanophile would love. So, I decided that I might use this opportunity to raise money for a good volcano-related cause as well.

I will be auctioning off, starting today (December 21) and ending Saturday December 24, a copy of the 2012 IAVCEI calendar.

I've even signed the August 2012 image that I took at the Waimangu Geothermal Valley in New Zealand. All proceeds for the auction will go to the Center for the Study of Active Volcanoes, a non-profit founded by Richard V. Decker. Here is a brief synopsis of their work: The Center for the Study of Active Volcanoes (CSAV), based out of the University of Hawaii at Hilo, offers a summer training program for scientists and technicians from developing countries with active volcanoes. The scientists learn how the USGS monitors Kilauea volcano, and return to their home countries better equipped to monitor the more dangerous volcanoes back home (Misti, Mayon, Nyiragongo). Often, the scientists who need to attend lack the funds to do so; consequently, CSAV welcomes financial contributions that help pay course fees or airfare for needy participants. If you win the auction, not only are you helping support the training of geoscientists on monitoring active volcanoes, but also getting a great calendar to dazzle your friends/colleagues with images of the panalopy of active volcanism on the Earth. Head over to the auction to place your bid - and remember, you only have until the morning (eastern standard time) of Saturday December 24 to place your bid!