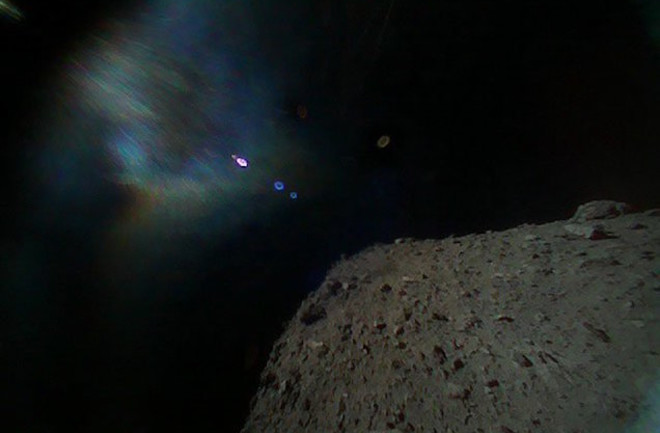 MINERVA-II rover 1B captured this picture of Ryugu right after it separated from Hayabusa2. (Credit: JAXA) We’ve sent rovers to explore neighboring planets and moons, but we can now check another near-Earth target off of the list. On September 21, Japan’s Hayabusa2 spacecraft successfully deployed two rovers on to the surface of asteroid Ryugu, becoming the first in history to accomplish such a feat. Once there, rover-1A and 1B were quick to get to work. They began exploring the surface, snapping pictures and taking videos, giving us a long-awaited ground-level view of an asteroid. Hayabusa2, which has been hovering roughly 12 miles (20 kilometers) above the asteroid since it arrived in June, descended to just 180 feet (55 meters) above Ryugu to deploy the rovers from its MINERVA-II lander. Now that they’re operational, the two will spend their time investigating Ryugu’s surface for clues about its formation, evolution and ultimately the state of our early solar system. Asteroids like Ryugu, which orbits between Mars and Earth, are hot research commodities. Unlike planets, it's believed they’ve more or less gone unchanged since they first formed in the early days of our solar systems. Researchers believe that they may have spread organic molecules around the ancient solar system, as well as water. Ryugu, which likely carries lots of hydrated material, is a good candidate for probing that hypothesis further.

Rover 1A takes a picture Ryugu's surface (left) and the reflection of sunlight (right) during one of its first hops across the asteroid. (Credit: JAXA) Jump Around These rovers don't operate like their counterparts on Mars, though. Given the asteroid’s rough terrain, it would be pretty difficult for them to navigate with wheels and crawlers like traditional landers do. Ryugu also has a weak gravitational field, so a standard rover would start floating into space as soon as it started moving. To get around these obstacles, JAXA opted to have them "hop" around the surface instead of roll, allowing them to jump over rough patches. Using internal rotating masses, each bot can propel itself upward and remain afloat for nearly 15 minutes, traveling up to 49 feet (15 meters) with each hop. And thanks to advanced accelerometers, optical sensors and gyroscopes, they operate completely autonomously. Time to Investigate The rover's journey isn’t just a frolic through space, though. Their tiny bodies, which measure just 7 inches (18 centimeters) in diameter, are equipped with high-powered, asteroid-probing instruments. The rovers will use their seven cameras to study Ryugu’s estimated 3,020-foot (920-meter) surface, ultimately creating a 3D, composite image of the asteroid. An up close view of its surface will help researchers figure out the conditions that it formed in, and how much of a cosmic beating it's taken during its evolution.

Rover 1B snapped this picture of Ryugu's rocky terrain shortly after its arrival. (Credit: JAXA) As they image the asteroid, the probes will also use finely tuned sensors to record surface temperatures at each destination. Variations in temperature will help shed light about its physical properties and its possible makeup of elements. But even with their impressive instruments, probing a massive asteroid is much too big a job for two tiny rovers. In about a week or so, the duo will be joined by the MASCOT lander, who will use an infrared microscope and wide-angle camera to record Ryugu’s structural, compositional and surface characteristics, and also document how well it holds onto heat and what its magnetic properties looks like. And as soon as the end of October, they could be joined by Hayabusa2 itself, which will make its first attempt at shooting a projectile into the asteroid and collecting samples to bring back to Earth. The team will then welcome a final member, a third rover from MINERVA-II, next summer. The gang will gather as much information about Ryugu as possible before Hayabusa2 returns to Earth in 2020.