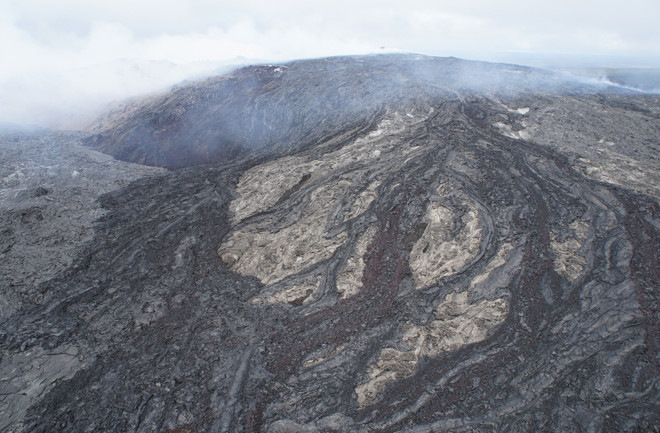 Lava flows on the Puʻu ʻŌʻō's eastern flank "spillway", seen on February 25, 2013. Image: HVO/USGS. So, the next few weeks are going to be quite hectic for me, but the reason is nothing to complain about: we're off to Hawai'i. No, this isn't a vacation, but rather our annual Geosciences Department Spring Break field trip, this time to the big island of Hawai'i. Eighteen students and four faculty (including me) will be spending a week trekking across the island seeing as many different geologically-amazing sites as we can cram into 7 days. So far, we're going to spend 3 days on Kilauea itself, hiking the lava flow fields, getting a tour of the Hawai'i Volcano Observatory and (hopefully) getting out to see the active lava flow field. This means I might be getting up close and personal with some molten, basaltic lava! Now, you never know what the flows are going to be doing on any given day, so I'm not holding my breath, but still, to be up on an actively erupting volcano (heck, staying on it!) will be amazing (and remember, two years ago in March, we had the Kamoamoa eruption). We're also going to curve around the island to check out some of the green, black and white sand beaches on the island, hopefully look at some of the weird alkalic lavas from recent (well, last ~150 years) eruptions from Mauna Loa and Hualalai. Depending on conditions, we're going to try to get up to the top of Mauna Kea -- which will be quite the day, to go from sea level in Kona to the summit at ~13,808 feet. Then, we'll finish with a tour through some of the giant avalanche scarps on the oldest of Hawai'i's five volcanoes, Kohala. All in all, it should be a spectacular trip. Now, we don't leave until Friday, but with classes and preparations for the voyage, things are busy. I'm hoping to get a few posts out before I leave, but we'll have to wait and see how the schedule breaks down. I'll be travelling relatively light when I'm in Hawai'i -- with my iPad and iPhone but no laptop -- so likely I won't be able to post from the island. However, I will be posting pictures on my Twitter feed periodically -- @eruptionsblog -- so be sure to keep an eye out for them (check the Twitter box on the right hand side of this page). I'll be sure to post a recap of the trip when I get back, so look for that the week of March 18. And heck, maybe you'll catch us on a webcam!