Paleontologists have identified the world’s largest dinosaur in Argentina. However, it can be difficult to definitively compare these massive reptiles. 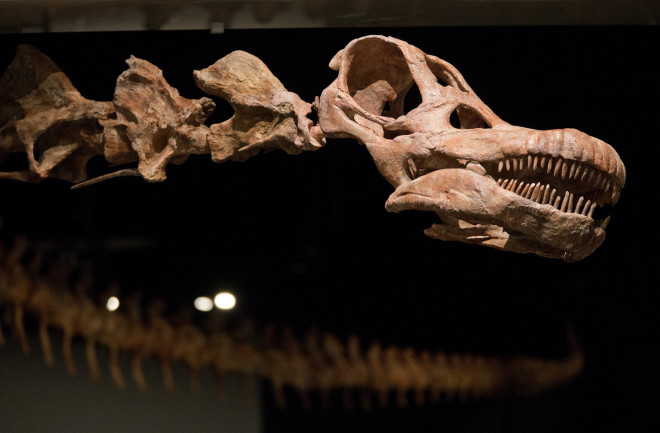 We may have found the largest dino of all, but bulkier sauropods continue to pop up. (Credit: Mary Altaffer/AP)

Dinosaurs keep breaking records. Every so often, paleontologists report that another giant, long-necked dinosaur might win the title of “Biggest Yet.” Since 1993, Argentinosaurus had stood as the likely record-holder, only to be supplanted in 2017 by the roughly 120-foot-long, 57-ton Patagotitan. In yet another upset, this year paleontologists working in Argentina’s Neuquén Province announced their finding: another sauropod that may be even larger.

The new dinosaur is currently unnamed, but its bones were described in a June Cretaceous Research paper by paleontologist Alejandro Otero of Facultad de Ciencias Naturales y Museo in Buenos Aires. Researchers have uncovered about two dozen vertebrae and hip and shoulder bones from this 98-million-year-old animal. The fossils indicate that the creature was a titanosaur — a long-necked, herbivorous dinosaur related to Argentinosaurus and Patagotitan that was comparable to, or slightly heftier than, its closest competition.

Just how giant this dino was, however, is difficult to tell. As Otero notes, the remains of all “Biggest Yet” contenders are incomplete, their sizes only estimated. Great Plains Dinosaur Museum paleontologist Cary Woodruff agrees, noting that “the episodic media battle over the largest sauropod is fueled nearly entirely from incomplete remains.” Some hadn’t stopped growing when they died, he adds, making it difficult to compare maximum sizes between dinosaurs. Paleontologists have to consider variation among individuals in addition to variation among species.

Resolving the dino dimensions contest will partly depend on finding more fossils, such as limb bones that can help estimate total body mass. Still, Otero notes, “I don’t think there will be a discovery of a much larger species of sauropod,” adding that he’s waiting for huge, complete sauropod remains. Most curiously, all of the opponents appeared similar in size, raising the deeper (and so far unresolved) question of how such giants evolved over and over again.