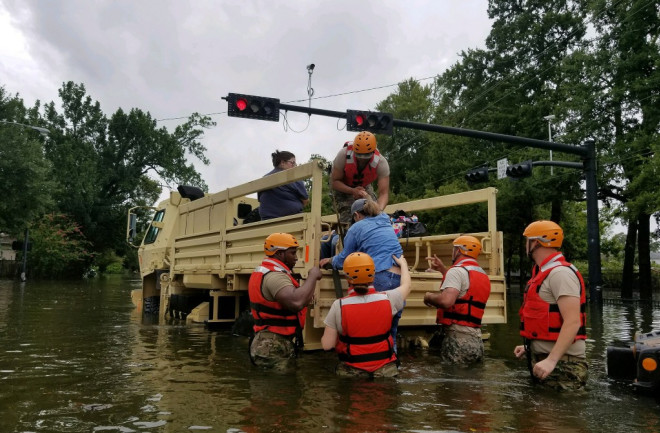 Texas National Guard members rescue survivors from Harvey on August 27, 2017. Photo by 1st Lt. Zachary West, 100th MPAD) CC-by-2.0 The biggest news right now is the devastation caused by Hurricane/Tropical Storm Harvey. It wasn't the arrival of the storm itself but rather the long and intense rains that have done the damage -- and really, the flooding that the Houston area is experiencing right now is some of the most stunning and devastating in the last century for the United States. I'm not going to go through all the details here but you can read the ongoing updates on Buzzfeed or check out the Twitter feeds of Eric Holthaus, Brian Kahn or Marshall Shepherd. Some of the video and images I've seen from Houston are astounding. The stream gauge at Buffalo Bayou crested at over 5 meters (17 feet) above the maximum flood stage. Yes, you read that right -- we're experiencing a flood that is truly catastrophic (and it is likely going to get worse).

Sadly, the worst of the flooding is yet to come. Buffalo Bayou not cresting until Wednesday morning with additional rain. Incredible. --> pic.twitter.com/vwfCWSkjnJ

Roads have literally become rivers, and deep rivers at that.

Now, we can all shake our heads and say what a tragedy this is. However, this event is yet another example of how underprepared we can be for disaster. The coast of Texas knew Harvey was coming and yet thousands upon thousands of people were left unevacuated -- and this isn't because many didn't want to evacuate, but rather they just couldn't due to health and monetary reasons. Easy evacuation is a luxury for most people, so without government assistance, many are left trapped in rising waters. Worse, this disaster won't be over for months to years

according to FEMA director Brock Long. Much like New Orleans after Katrina,

this will cause a significant impact on the country's economy and a massive impact on the Gulf coast of Texas. We face all sorts of disasters in the United States. Some can be very localized like tornadoes or landslides. Others, like Harvey, can be widespread. Imagine the impact of a large earthquake in the Los Angeles area

, where roads could be cut off for days. These are places where we should expect that we should be building in full earthquake resiliency, yet we still see houses such as these on stilts being built:

What could possibly go wrong? Hint: these houses are in #LosAngeles#Californiapic.twitter.com/81kZOve93W

Disasters like an L.A. earthquake or large eruption of Mt. Hood

are events that may not happen in our lifetime -- in fact, they are unlikely to occur. However, they could happen and that is all we need to know about being prepared. If we ignore the threat

and allow for lax building codes, development in regions that face high hazards (like the flooding in Houston), if we don't fund planning for disasters or recovery after the fact, then we leave ourselves in a very vulnerable place. It is somewhat akin to the grasshopper that didn't plan for winter: you starve without the help of others. We need to embrace what science can tell us about hazards (and that takes money) and make plans that not only help people get out when needed but also prevent expansion into areas that could be devastated. How do you safely evacuate millions of people? How do you house tens of thousands of people safely for possibly years? How do you rebuild with an eye to future crises? These questions take broad participation and money ... both of which tend to disappear after the disaster is "over" in the media. This is hard. Humans aren't great about thinking about long-term hazards. People stop being worried about a disaster when the memory of the last one has faded. We can take an individual approach, such as prepping a disaster kit

, but in order for true resilience, we need government organizations that can coordinate across wide areas to get people out and keep them safe for what could be years. Society exists for a reason and we have to all band together to make sure these events don't continue to become humanitarian disasters

. We may never meet the people we save if we prepare broadly now. The disaster may not come for a century, but when it does, our forethought now could mean thousands of people who don't need to suffer. If you'd like to help, please donate to the Red Cross for Harvey relief