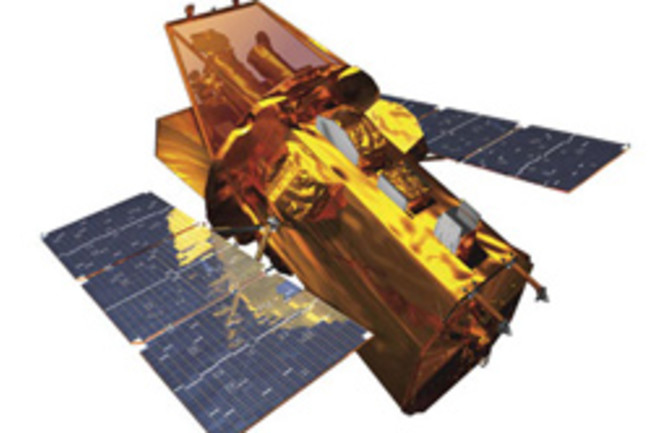 NASA's little satellite that could, Swift, recently celebrated its seventh year in space. It blasted into orbit on November 20, 2004, starting a mission that would increase our understanding of the most violent events in the universe, and shatter cosmic distance records. I wrote about Swift six years ago, on the first anniversary of its launch, and the funny thing is not a whole lot has changed except for the numbers. It's still going strong after 2500+ days in orbit, and instead of dozens of gamma-ray bursts seen after one year, now it's seen well over 600. Gamma-ray bursts are the mind-numbingly violent explosions of stars that signal the births of black holes, and each event releases as much energy in a few seconds as the Sun will over its entire lifetime. Happily, the Earth is nowhere near any potential GRB candidates (the nearest is about 7500 light years away, far enough that any damage it could do to us would be relatively mild), but if one were, say, 100 light years away, it would cook us like a whelk in a supernova.

Observing GRBs is Swift's primary mission, and it's performed outstandingly. It's spotted what might be the most distant cosmic explosions ever seen, at 13.14 billion light years away from Earth. It saw the brightest GRB ever detected. But it's also surveyed the sky, looking at high-energy light from sources near and far. It's mapped our nearby galactic neighbors the Andromeda (shown above) and Triangulum galaxies in ultraviolet. It's even observed near-Earth asteroids. You can see the latest GRBs seen by Swift online, and there's also a fun little iPhone/iPad app you can download that shows you Swift info, including the latest GRB detected and where Swift is in its orbit over the Earth. I worked on Education and Public Outreach for Swift for many years, and it's really nice to see it still pumping out fascinating and important science. Happy birthday to Swift and congratulations to the Swift team! Image credits: NASA; Image credit: NASA/Swift/Stefan Immler (GSFC) and Erin Grand (UMCP)