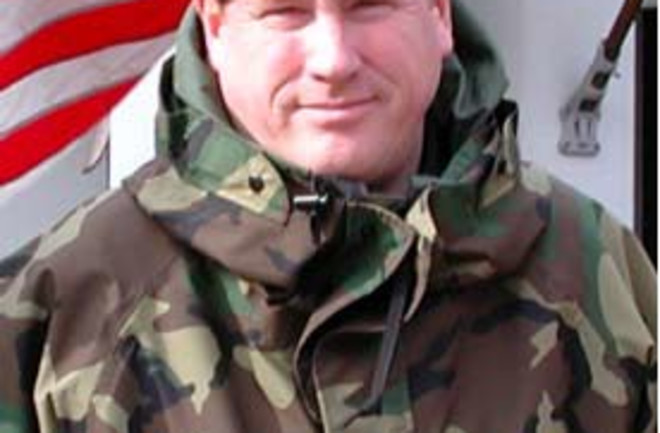 My very good friend Lt. Colonel Hal Bidlack is running for Congress. He's running for a seat in the House of Representatives for Colorado's 5th District. This is Colorado Springs, home to conservative icons like the Air Force Academy and (shudder) Focus on the Family. This is not a stereotypically progressive place. Hal's running as a Democrat. And I think he can win. The incumbent, Doug Lamborn, is a Bush lackey, and a neocon of the worst sort. His votes on the Floor align with whatever Bush wants virtually every single time. That will be quite the dead weight come November. His voting record speaks for itself. The guy has to go. Hal, on the other hand, is someone who can think for himself. As he said to me recently, he's a western Democrat: he thinks the government should stay out of our business when it doesn't belong there, that the Second Amendment is a pretty good thing, and that we shouldn't spend money when we don't have it. Radical, eh?

You can read all about Hal's excellent qualifications on his Wikipedia page and his campaign site (you can join his fan base on Facebook, too). But they don't tell you everything about him, of course. I met Hal at Randi's first Amazing Meeting in 2003. He struck me as an upright guy: smart, funny, warm, and, oddly, polite. We hit it off pretty quickly. He was the MC for the meeting, and during a panel I was on he gently teased me, and I gave it right back to him. But it was what happened earlier that solidified Hal in my mind. About an hour before I was to speak, the Space Shuttle Columbia broke up upon re-entry over Texas, killing the astronauts and putting NASA into a tailspin itself. I was rocked, as was everyone, of course. Hal was asked to announce this at the meeting, minutes after it happened. With only moments to prepare, this is what Hal said:

The space shuttle Columbia was lost a few minutes ago. At 200,000 feet over Texas, NASA lost contact and images from the ground show the shuttle breaking up and impact is reported north of Dallas. Now listen to me. I'm a career military officer. This is a tragedy. But these people were doing exactly what they wanted to do, in exactly the place they wanted to be. When Dave Scott set foot on the moon on Apollo XV he said, "Man's fundamental nature is to explore, and this is exploration at its greatest." Gus Grissom gave an interview a week before the fire on Apollo I and he said, "if there's an accident, for God's sake, don't let it stop the program." This is a tragedy, but they understood, and that's what we do in the military. We're going to take an hour break. We've got TVs in the lobby. We're going to try to put a TV into this signal and of course you can go up to your rooms if you wish. And in an hour; let's call it 11:30, that's an hour and 15, we're going to continue the conference because I believe that it would be an insult to their memory to deny this audience the information that we want to give it. We can mourn, and we shall, but with dignity and grace, and remember that the space program is an amazing thing. I know astronauts. They were where they wanted to be.

Hal Bidlack stood up and gave that speech without notes, just saying what needed to be said. It speaks of a sharp mind, a grasp of reality, as well as a human viewpoint that showed in its own way our ability to overcome even major obstacles and succeed. In that short speech he was able to convey the sorrow we would all feel once the shock wore off, but he was also able to turn it into inspiration. That's just how Hal is. I don't live in Colorado's 5th District, so I can't vote for Hal. If you do live there, I encourage you to investigate the issues and vote as you see fit. But if you don't live there, you can still help put a good man -- one of the few -- into Congress. If you are an American citizen, please consider donating to Hal's campaign fund. You know how very rarely I ask for something like this, so I hope you understand how important this is. Hal deserves to get a chance to make things right in this country, just as much as we deserve to see them made right. That's why I am officially endorsing Lt. Colonel Hal Bidlack for Congress, representing Colorado's 5th District.