Gypsies on a genetic island 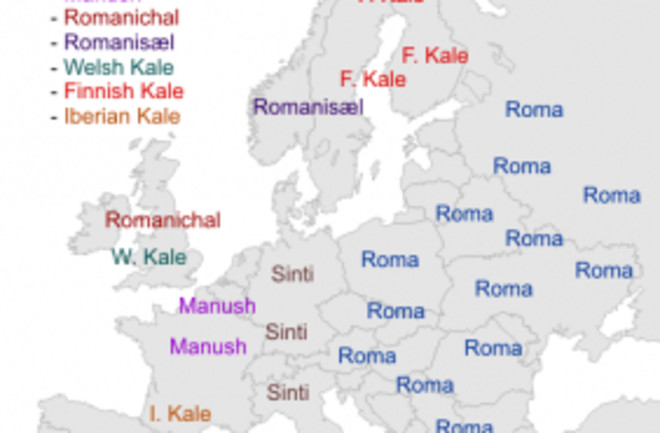 If you live in the States one of the things you hear a lot about Europe in regards to its relationship to its ethno-religious minorities are the problems with Muslims. This is probably an Americo-centric perspective shaped by 9/11, when many of the hijackers had turned out to have spent time in Germany. Additionally, terrorist actions in both London and Madrid highlight the persistence of these problems over the years. These sorts of shocking events put a sharp focus on the geopolitical cross-hairs which Europe finds itself in in the second age of mass migration. Though this time it is a destination, and not a source.

But having been to Europe recently it was notable that in several regions the day-to-day tension when it came to ethnicity often focused on Gypsies (I use the older term because the ethnonym “Roma” which has become politically correct in the USA includes only a subset of Europe’s Gypsy population, even if the greater number). Many regions of Europe now have two distinct populations of Gypsies, a long resident local group, as well as Roma from the eastern nations of the EU. Though the relationships between these traditionally nomadic peoples and indigenous populations has never been without tension, it is clear that something close to a modus vivendi has been achieved in many European nations between the majority and their small native Gypsy populations. The influx of the Balkan Roma add a new variable.

But the political fuss for me simply rekindled a curiosity as to the genetic origins of the Gypsies. Culturally their South Asian provenance couldn’t be clearer; they speak an Indo-Aryan language. Their term for themselves in many parts of Europe comes from the  Indo-Aryan word for “black,” as they are are darker than the natives of the lands in which they have settled , and in fact often look visibly South Asian. This seemed especially true of Balkan Roma. On the other hand the Kale of Finland looked to be brunette Europeans.

The problem with the genetics of the Gypsy people of Europe is that until recently they’ve focused on uniparental lineages. Though this has confirmed their South Asian origins, looking at maternal or paternal direct descent alone leaves something to be desired in terms of assessing ancestry, and, these two markers (mtDNA and Y) are subject to more drift as they are haploid (half as many copies). But a new paper in The American Journal of Physical Anthropology has some results using 16 autosomal STRs (a group of highly variant markers). A Genetic Historical Sketch of European Gypsies: The Perspective From Autosomal Markers:

In this study, 123 unrelated Portuguese Gypsies were analyzed for 15 highly polymorphic autosomal short tandem repeats (STRs). Average gene diversity across the 15 markers was 76.7%, which is lower than that observed in the non-Gypsy Portuguese population. Subsets of STRs were used to perform comparisons with other Gypsy and corresponding host populations. Interestingly, diversity reduction in Gypsy groups compared to their non-Gypsy surrounding populations apparently varied according to an East-West gradient, which parallels their dispersion in Europe as well as a decrease in complexity of their internal structure. Analysis of genetic distances revealed that the average level of genetic differentiation between Gypsy groups was much larger than that observed between the corresponding non-Gypsy populations. The high rate of heterogeneity among Gypsies can be explained by strong genetic drift and limited intergroup gene flow. However, when genetic relationships were addressed through principal component analysis, all Gypsy populations clustered together and was clearly distinguished from other populations, a pattern that suggests their common origin. Concerning the putative ancestral genetic component, admixture analysis did not reveal strong Indian ancestry in the current Gypsy gene pools, in contrast to the high admixture estimates for either Europeans or Western Asians.

This isn’t a 500,000 SNP-chip analysis, so everything needs to be taken with a grain of salt. But, 16 markers is a lot more than the two you usually have to deal with when assessing the genetics of the Gypsy populations of Europe, so it’s certainly an improvement when making inferences. One figure and table are really worth looking at in this paper.

The first plot shows the variance partitioned into two dimensions as a function of the 13 STRs. The table shows bootstrapped admixture estimates and standard deviations. They had a 3-population model with West Asians, but it didn’t look to me like they were getting sensible results with that, so I excised that portion (with only 600 pixels the table would have been very hard to read with the nonsensical estimates in). I think the last model where they aggregate West Asians with Europeans makes the most sense. I assume the major issue here is that with 16 STRs which aren’t necessarily filtered for ancestral informativeness within these populations you’re going to get weird results on the margins.

These results confirm the finding from previous Y and mtDNA results that Europe’s Gypsy populations are genetically fragmented, and seem to have gone through bottlenecks. In this paper they also seem to have found a pattern of decreased genetic variance from east to west for the Gypsy groups, which makes sense in light of a historical model of serial bottlenecks as they traversed Europe. Any reasonable model of the genetic heritage of the Gyspy people of the world posits that they’re a compound to various extents of populations distributed along a continuum between South Asia and Western Europe, and yet here you see a 2-dimensional plot that they don’t look like a linear combination of South Asians and Europeans. Why? Because of their unique genetic history has resulted in their “random walk” into patterns of allelic variance distinct from the ancestral groups.

But a second genetic dynamic with these populations seems to be admixture. With 16 STRs, and obvious sensitivity depending on the populations you survey, one should be careful about overweighting the findings from this paper. And yet plausibly it does show a pattern of decreased South Asian admixture the further you go from the Balkans. Not only does this stand to reason a priori, but empirically it’s generally agreed that the Gypsy groups of the north and west of Europe look less South Asian in appearance than those of the Balkans.

A final consideration here is that the Indian populations which they used as a reference for South Asians are not representative of the ancestral Indian groups from which Gypsies derived. The Indo-Aryan language of the Gypsies seems to share the most features with the language of northwest India, Punjabi and Hindi. But the samples which had the appropriate STRs for comparison were Central and South Indian. Overall I don’t think that’s that much of a consideration, but something to remember.

A bigger take home point is the disjunction between cultural and biological modes of inheritance and persistence. The language of the Gypsies retains in its broad outlines the character of an Indo-Aryan tongue. That is why the South Asian origins of Gypsies was able to be ascertained by Indian sailors in Britain who overheard, and broadly understood, what Gypsies were saying. Romanipen, the spirit of Gypsy culture which transcends difference of religion and nationality, seems to be clearly traceable to some South Asian antecedents (e.g., the emphasis on avoidance of contamination of food by outsiders).

And yet despite the cultural distinctiveness the various Gypsy populations have become genetically less South Asian. That makes sense, it seems likely that they left India ~1000 years ago, or 40 generations. They’ve been in the Balkans for about 600 years, or 24 generations. Let’s assume unrealistically that the Roma were 100% South Asian when they arrive in the Byzantine lands (there are related groups in the Middle East, so it seems certain they picked up Middle Eastern ancestry along the way, but no matter). 99% endogamy per generation would imply that they’d be 79% South Asian today. 95% endogamy would result in them being 29% South Asian. 90% endogamy would mean that they’d be 8% South Asian. Reality is more complex. It is likely that in the early periods when social norms had not hardened and Roma were less numerous the endogamy rates were probably far lower, especially as the Gypsy bands mixed with other destitute groups in the Balkans. The evidence of lots of structure across the Gypsy groups points to endogamy drilling down to a lower level of organization than just the ethnic group, which would be consistent with tendencies within South Asian culture more broadly.

More generally it seems that the Roma and their relatives can’t just be understood as a simple linear combination of Europeans, Middle Easterners, and South Asians, genetically or culturally. Their unique history has reshaped them, and their persistence and demographic expansion in the face of ostracism and persecution are clear evidence as to the functional success of their social-cultural traditions.