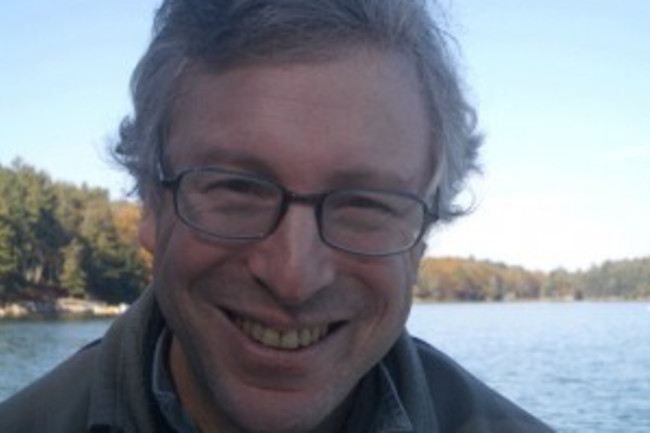 A little treat for loyal CV readers: Tom Levenson is a professor of science writing at MIT, and the proprietor of the Inverse Square Blog, one of the most erudite scientifically-minded outposts in this blogosphere of ours. I've been enjoying how Tom writes engagingly about science while mixing in cultural and artistic references, so I asked if he would like to guest-blog a bit here at CV. This is the first of three posts he'll be contributing; look for the other two later this week. [Here is two, and here is three.] ----------------------------------------------------------------------- Monday Isaac Newton blogging: A little light reading, Principia edition.Update: See correction below.** To introduce myself to the Cosmic Variance community (at Sean’s very kind invitation), let me just admit up front that I am a glutton for punishment. Exhibit A: last year I read the Principia for pleasure.* That’s not exactly right– it is more accurate to say that in the context of writing a book on Isaac Newton’s role as currency cop and death penalty prosecutor, I found myself reading the Principia as literature rather than the series of proofs it appears to be. Just like John Locke, who had to ask Christiaan Huygens if he could take the mathematical demonstrations on faith (Huygens said he could), I read to see what larger argument Newton was making about the ways human beings could now make sense of material experience. (This is, by the way, the only connection I can imagine that Locke and I share.) What I got out of the exercise, more than anything else, was a reminder of how something we now mostly take for granted is in fact truly extraordinary: taken all in all, it seems genuinely remarkable that cosmology exists at all as a quantitative, empirical science. That is: it is not obvious – or at least it wasn’t, all that long ago, that it would ever be possible to treat the universe as a whole as an object of study – especially given our very constrained vantage point from within that which we want to examine. Most accounts of the story of modern cosmology more or less unconsciously downplay the strangeness of the claim that we can in fact make sense of the universe as a whole. They begin – mine did -- with Einstein and the 1917 paper "Cosmological Considerations in the General Theory of Relativity, (to be found in English translation here.) Cosmology in this telling becomes more or less an inevitable extension of a recent advance in theoretical physics; the change in worldview precedes this extension of the apparatus of general relativity into a new calculation. I recant: though I certainly wrote my version of this basic tale, reading Newton has reminded me of the much more radical change in the understanding of what it is possible to think about that had to precede all that cosmology (among much else) has achieved. It certainly was not clear that the universe as a whole was subject to natural philosophical scrutiny in 1684, the year of Edmond Halley’s fortunate visit to Trinity College, Cambridge, and his more-or-less innocent question about the curve traced by a planet, assuming "the force of attraction towards the sun to be reciprocal to the square of their distance from it? [strike]that would produce an elliptical planetary orbit with the sun at one focus.[/strike] An ellipse [strike]inverse square relationship[/strike], Newton told Halley. How did he know? Why – he had calculated it. By 1686, Newton had extended and revised his off-the-cuff answer into the first two books of Principia, both titled "The Motion of Bodies." These pursued the implications of his three laws of motion through every circumstance Newton could imagine, culminating in his final demolition of Cartesian vortex physics. But even though he had worked through a significant amount of mathematical reasoning developing the consequences of his inverse square law of gravitation, he left the ultimate demonstration of the power of these ideas for book three. Books one and two had been "strictly mathematical," Newton wrote. If there were any meat and meaning to his ideas, though, he must "exhibit the system of the world from these same principles." To make his ambitions absolutely clear Newton used the same phrase for the title of book three. There his readers would discover "The System of the World." This is where the literary structure of the work really comes into play, in my view. Through book three, Newton takes his audience through a carefully constructed tour of all the places within the grasp of his new physics. It begins with an analysis of the moons of Jupiter, demonstrating that inverse square relationships govern those motions. He went on, to show how the interaction between Jupiter and Saturn would pull each out of a perfect elliptical orbit; the real world, he says here, is messier than a geometer’s dream. He worked on problems of the moon’s motion, of the issues raised by the fact that the earth is not a perfect sphere, and then, in what could have been a reasonable resting point for the book as a whole, he brought his laws of motion and gravity literally down to earth, with his famous analysis of the way the moon and the sun influence the tides. Why not stop there? The story thus far had taken gravity from the limits of the observed solar system to the ground beneath each reader’s feet. More pragmatically – it told a story whose significance Newton’s audience would have grasped immediately: the importance of understanding the rules governing tides was obvious enough to the naval powers of the day.

No matter. Newton kept on going. The last section of his world-system turned to the celestial and seemingly impractical: the motion of comets, in an analysis of the track of the great comet of 1680. Newton presented his findings through two different approaches: one produced by collecting all the data points he could of traveler’s observations and plotting the comet’s track against those points; and the other in which he selected just three points and calculated the path implied. The two analyses matched almost exactly, and both showed that this comet did not complete a neat, elliptical orbit. Rather, it traced a parabola. Newton knew what he had done. He was no accidental writer. A parabola, of course, is a curve that keeps on going – and that meant that at the end of a very long and very dense book, he lifted off again from the hard ground of daily reality and said, in effect, look: All this math and all these physical ideas govern everything we can see, out to and past the point where we can’t see anymore. Most important, he did so with implacable rigor, a demonstration that, he argued, should leave no room for dissent. He wrote "The theory that corresponds exactly to so nonuniform a motion through the greatest part of the heavens, and that observes the same laws as the theory of the planets and that agrees exactly with exact astronomical observations cannot fail to be true." (Italics added). And now, finally, to get back to the point: this, I would argue, was the essential first and in some ways the most difficult step in the foundations of cosmology. With it Newton transformed the scale of the universe we inhabit, making it huge, perhaps infinite. Even more important, he demonstrated that a theory that could not fail to be true made it possible to examine one phenomenon -- matter in motion under the influence of gravity --- throughout all space. That thought thrilled Newton’s contemporaries – Halley caught the mood in his dedicatory poem to the Principia, writing that "Error and doubt no longer encumber us with mist;/....We are now admitted to the banquets of the Gods;/We may deal with laws of heaven above; and we now have/The secret keys to unlock the obscure earth...." To catch a distant echo of that euphoria, just imagine what it would have been like to contemplate that ever receding comet, fifteen years into its journey towards who knew where at the time of Newton’s writing, and know that its behavior was knowable through an extraordinary act of human invention. It’s a whole ‘nother story to ask what it would take to create a similar sense of pride and pleasure in a general audience today. But just to get the discussion going, I’d suggest that one of the oddities of contemporary cosmology as presented to the public is the degree to which the universe at large has become more homey; the very success in making the argument that there is a continuous scientific narrative to be told from the Big Bang to the present makes it harder to see just how grand a claim that is. So, to end with an open invitation to this community: what would make current physical ideas as powerful and as intelligibly strange as Newton was able to make his story of a comet traveling from and to distances with out limit? Last housekeeping notes: in one of the more premature bits of self-promotion in publishing history, the Newton material discussed above derives from my book, tentatively titled Newton and the Counterfeiter, coming early next year from Houghton Mifflin Harcourt (and Faber, for those of you across the pond). Also – my thanks again to Sean Carroll for welcoming me here. If you want to see what I do when I’m at home, check out The Inverse Square Blog. *If you are minded to pick up a copy of Principia, get this edition. Not only is it a well made book, easy to look at, well printed, with clear diagrams, it comes with the invaluable guide to reading the Principia written by I. Bernard Cohen. Accept no substitutes. **Thanks to reader and award-winning physics teacher David Derbes for catching my inversion of the problem Halley put to Newton. Let this be a lesson to me: blog in haste; check one’s notes at leisure; repent in public. Image: Woodcut by Jiri Daschitzsky, "The Great Comet of 1577." Source: Wikimedia Commons.