A little while back we advertised that Eugene Lim had volunteered to visit Haiti to teach in a university there over the summer, and would be reporting back about the experience. Here's Eugene's write-up -- a powerful and affecting look into conditions there, and the spirit of the students. ---------- I noticed a puzzled look on Vicky's face -- she was squinting at the blackboard filled with equations describing how the subtitution rule in integral calculus works. She is one of my better students whom I know to be following my lectures well. I took it as a cue that I have not made a point clear, and I knew I must fallen back into speaking as though as my students are native English speakers. They are not -- they speak Haitian Creole, and I was trying to teach them basic intro to mathematics in English and and a smattering of Creole. Hello from Fondwa, Haiti, elevation 850m, Population 8000. For the past twenty days, I have been teaching a group of enthusiastic Haitian university students at the University of Fondwa. As I mentioned in my previous post, the university lost all its buildings during the Jan 12 quake. At the moment, we are using an abandoned warehouse as a temporary campus. It has no roof, so we put a tin roof over to keep the rain out. We use tarps (thank you USAID) for our windows to keep the rain out. There are 3 classrooms and an office. Some of the students have lost their homes in the Jan 12 earthquake, so the university allowed them to stay inside the warehouse. 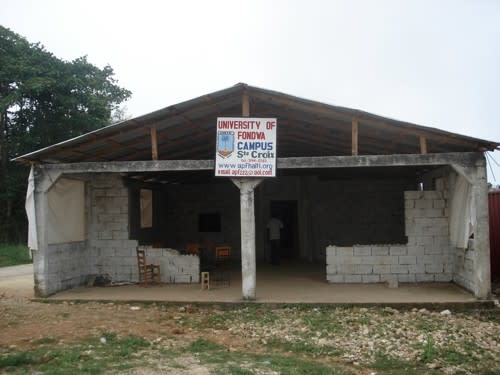 We have no running water and a few solar panels for power. Water is obtained from wells, from a spring (about 15 minutes walk up hill), and from the regular rain showers we have been getting -- hurricane season is upon us after all. This often led to me wondering whether I should be wishing for rain so we can fill up our water tank, or for the sun so we can charge up our batteries. Many of the students are extremely enthusiastic. In my first full day, when I was just waiting for a teaching assignment, Deb, Vicky and Everest approached me and asked me in halting English what I would be teaching. I told them I would probably be teaching them math, and they said they have not had a math professor for the entire semester, and oh would you help us with some of these problems. So I ended up working with them right there and then. Turns out that these vanguard of students have been trying to teach themselves math from some books. They have had some confusion with concepts that one would expect from being self-taught, but they were sharp and intelligent. I found it a joy to work with them. Deb in particular, is especially strong and spoke some English, so I hired him as my Teaching Assistant who can also translate for me. Given his mathematical acumen, I started teaching him more advanced topics in a special class. 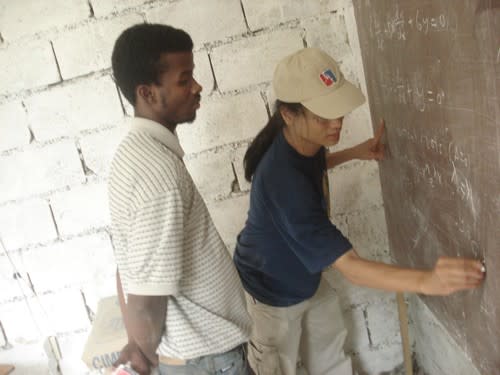 I was assigned to teach two classes in four weeks -- an Intro to mathematics (for first years) and the vaguely titled "Business Mathematics" class to the 4th years. After a quick evaluation of the students' ability, I ended up deciding that I am going to teach the first years differential and integral calculus -- useful things to know whether you are going to be an agronomist or a manager. For the "business math" class, I chose to teach them some basic statistics -- with the goal that they should be able to deal with frequency and probability distribution functions when completed. English is not a widely spoken language in Haiti, so it was a challenge to teach the classes. However, I find that we can make a lot of headway with a mixture of my rudimentary Creole and the combined English knowledge of my students, assisted by a dictionary. The classes understandably proceed slower than usual, but that is not always a bad thing in pedagogy. After a hesitant start, we settled on a good system where some of the more capable English speakers would translate for the other students in real time. Sometimes, some of the more advanced students would volunteer to teach a difficult concept which they have grasped to the class in Creole. The students are generally attentive, and eager -- I am often asked to teach extra classes. 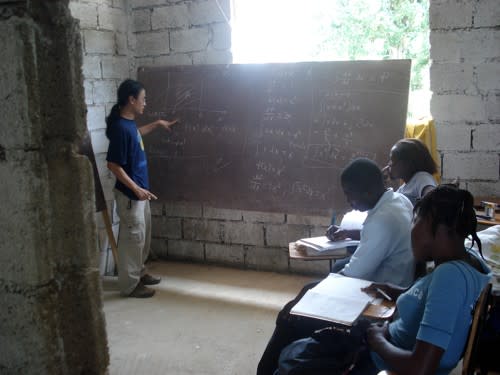 When classes are not in session, I am kept busy with students who wanted to learn more, or have questions about math or English. I find these impromptu discussion sessions the most rewarding -- I can teach the students at the pace at which they are learning. As a personal bonus, I have the luxury of having the students teach *me* Creole. Although I am assigned a very good Creole teacher, I learned most of my Creole from such constant interaction with the students. 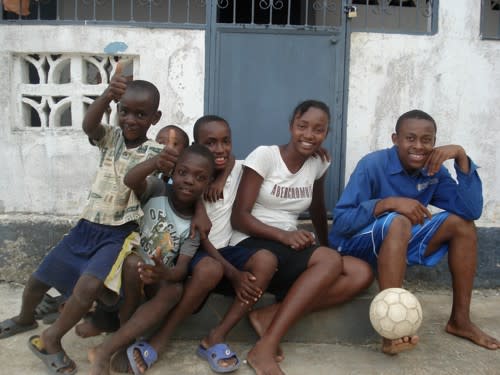 Living conditions in Fondwa are rough. I am staying in a semi-collapsed building with a couple of volunteers from the US (Rohan Mahy and Reuben Grandon), and a rotating roster of Haitian teachers, most who live outside Fondwa : unfortunately qualified teachers and lecturers are extremely scarce in Haiti. Our quake damaged building has no running water, no power, and red "X" marks on parts of the buildings that are unstable -- a non-trivial indicator since we are still experiencing aftershocks (I personally felt three so far). On the other hand, we have a great view -- on a clear day, we can see distant Leogane northward and the Gulf of Mexico, 80 km away. Nevertheless, our humble abode is a palace compared to the conditions that most Haitians live in. Many of them have lost homes in the quake; some of hem are still living in tents. Ironically, many of the stone buildings collapsed, while the wooden ones survived. I visited one of the tent cities of Port-au-Prince -- they are hot, dusty, crowded and so incredibly unsanitary that they seems like epidemic timebombs waiting to go off. Every single building left standing suffered some form of damage from the quake -- sometimes looking past the intact facade will reveal a completely collapsed back portion of the house. This does not stop Haitians from living in them. There is a strong sense of communal spirit among rural Haitians, more than once, I was told by the tenants that their house was "kraze" (destroyed) in the gudu-gudu (quake) and they are living in that "kind madame's" house. Our neighbouring house, a wooden structure no bigger than the size of a school bus, is home to thirty men, women and children. The Haitians are very friendly. After getting past the initial bemusement (and amusement) of being called "blan" (white man) in the first few days, I find the Haitians incredibly hospitable, and resilient in the face of such hardship. Wherever I go, it is easy to smile and call out a "bonjou" or "bonswa", or "komen ou ye" (how are you?) to people passing me or just doing chores in front of their houses. I have a special love for the Haitian children -- they are the most energetic and playful bunch of kids I have ever met. A group of them would show up at our house from time to time, screaming the names of us *blan* volunteers, and we would end up playing with them until we are exhausted. It is poignant for me to know that some of them have lost siblings and parents in the quake. I will be leaving Haiti in a few days. Personally, I found the teaching experience and my interactions with the Haitians incredibly fulfilling and rewarding. But it was also very sobering to see the damage, destruction and human misery caused by the quake. There is a lingering sense of not having done enough, and that there is so much more left to be done. I do plan to come back again, and perhaps learn enough Creole to teach in it next time.