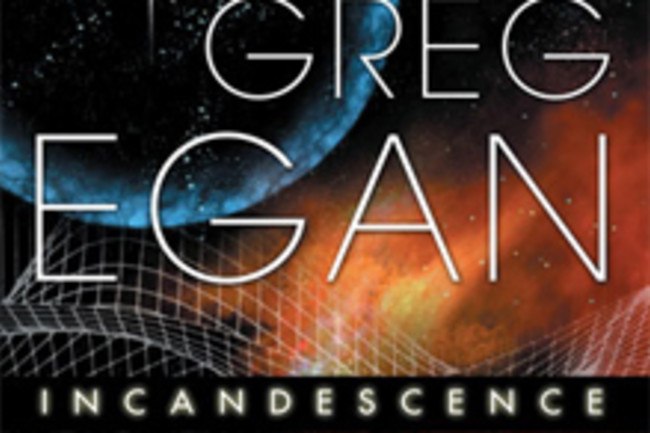 Hot on the heels of last week's posts about using 100 per cent proof real science in science fiction (Special Relativity in particular), Night Shade Books sent me a copy of Greg Egan's recently released novel Incandescence. Greg Egan writes what can be called hard space opera. The space opera part comes from the fact that his books are set on a galaxy-sized canvas, and most of his protagonists are members of fantastically advanced civilizations. The "hard" part refers to hard science fiction -- the physical laws followed and natural objects found within this type of story are written to be as close to scientifically accurate as possible. Incandescence follows two narrative threads: that of two bored citizens of the Amalgam, a conglomerate of civilizations that fill the Milky Way's outer disc, and two nascent scientists who live deep in the galaxy's inner bulge, an area that has been pretty much a no-go zone for the Amalgam for countless millennia. The nascent scientists, Zak and Roi, live in pre-industrial world (known as The Splinter) that is so bizarre that it's initially hard to see how such a place could exist within our universe. But their world is threatened with disaster, and (aided by some of the very features that make The Splinter so bizzare) Zak and Roi find themselves pushed to discover that scientific jewel in the crown, the General Theory of Relativity. This is a tall order to pull off for a novel, both in terms of making it logically possible and in terms of creating a story that you will want to keep reading. Egan manages it though, and Incandescence sets a new bar for hard science fiction. Egan is uncompromising about the science, and in places the discussion of various experiments can be a little tough to follow, not least because Egan insists on using Zak and Roi's terms for the various directions that exist on The Splinter -- instead of things like left/right, inward/outward, or even +x/-x, there is garm/sard, rarb/sharq and shomal/junub. But if you really want to get your teeth into it, Egan has built an incredibly detailed accompanying web site that explains much of the science and mathematics (although as I noted last week, General Relavitivity, which incorporates the effects of things like gravity, is a much tougher beastie, conceptually and mathematically, than Special Relativity, which deals with the simpler case of uniform motion and is largely accessible with high-school math and physics). There are a few spoilers on Egan's site, so you may want to wait for at least few chapters in before turning to it, but it does contain an interactive simulation of the Null Chamber, a zero-gravity region of The Splinter. The simulation allows you to perform many of Zak and Roi's experiments and see the counter-intuitive results for yourself without having to troop all the way to the galactic bulge. If you're interested in thinking about just how weird the universe can be, and yet still be recognizable as something of a piece with our own experience, check out Incandescence.