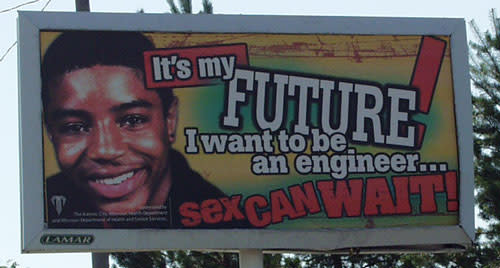 That's why you should become scientists, kids! (Because engineers don't have sex. You want me to spell it out for you?) I really should just leave it at that, but the sprawling, multifaceted stupidity of this public service announcement -- apparently having sex, like smoking the wacky weed, kills brain cells and will cripple your SAT scores, or something -- is difficult to let pass without comment. The immaturity of our cultural attitudes toward sex is flat-out embarrassing. There are real concerns that adolescents should be taught about -- disease and the risk of unwanted pregnancy being the obvious ones. But they should also be taught that, as long as you are careful about such things, there is nothing wrong with having sex. Done correctly, it can be fun! Sure, there can be emotional trauma, awkward moments, broken hearts, impetuous late-night phone calls that you wish you could take back the next day. But these are downsides associated with life, not with sex per se. But as a society, we're too uptight and hypocritical to say these things. Instead, we get stuff like abstinence-only sex ed, with predictable results. And adolescence, which isn't going to be an easy time of life for most people no matter how much sensible advice they are given, becomes just that much more agonizing and uncertain. Except for engineers, of course! They have it figured out.