Gravitational Waves Show How Fast The Universe is Expanding 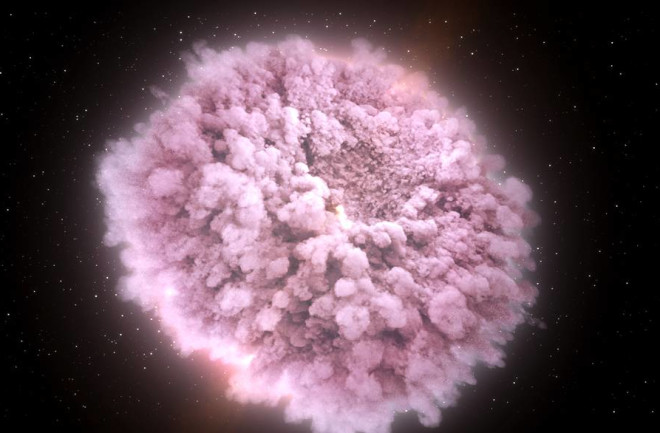 A cloud of debris ejected into space as two neutron stars merge. (Credit: NASA Goddard Space Flight Center/CI Lab) The first gravitational wave observed from a neutron star merger offers the potential for a whole raft of new discoveries. Among them is a more precise measurement of the Hubble constant, which captures how fast our universe is expanding. Ever since the Big Bang, everything in the universe has been spreading apart. It also turns out that this is happening faster and faster — the rate of expansion is increasing. We've known this for a century, but astronomers haven't been able to get precise measurements of the increase in rate, due mostly to the fact that they've had to cobble together a range of data to estimate how far away things in the universe are. Gravitational wave observations offer a direct means of measuring distances in the universe. The LIGO collaboration is constantly monitoring the universe for the subtle stretching of space-time that huge astronomical collisions can create, and measurements of the amplitude and frequency of the waves it catches hold valuable information for astronomers.

The most recent catch happened on August 17, and the massive collision was seen for the first time with conventional telescopes as well. Multiple papers from over 4,000 researchers explore the implications of the groundbreaking find, one being that researchers finally have the data they need to better pin down the Hubble constant. Conventional telescopes provide one piece of the puzzle by measuring redshift, or the elongation of waves of electromagnetic radiation caused when something is moving away from us. It's like the how the Doppler effect causes a siren to increase in pitch as it moves toward us, but decrease as it moves away, but for light. This shows astronomers how fast something is moving away, and it's something they've gotten very good at. To measure expansion, though, we also need to know how far an object is away from us, which is more difficult. There's really no points of reference in the sky for astronomers to use when measuring distance, so they've had to rely on a hodgepodge of different measurements called the cosmic distance ladder. Cobbling together different observations introduces more opportunities for error, though, and the result is that astronomers got two different results for the Hubble constant based on what observations they used.

Gravitational waves make all that obsolete, however, because the signal contains an intrinsic measure of distance. The amplitude of the wave lets astronomers know how far away something is, 130 million light-years in the case of this neutron star merger. Pairing that number with redshift measurements from conventional telescopes also pointed at the neutron stars gave them everything they needed. Previous measurements of universal expansion were split between either 67 or 72 kilometers per second per megaparsec. With their more precise tools, the gravitational wave astronomers landed pretty much in the middle — they say they've pinned the expansion of the universe at 70 kilometers per second per megaparsec, in a paper published in Nature. The acceleration of the universe is an important variable for researchers studying things like dark matter and dark energy. Actually pinning it down is crucial in the search for those things that we can only measure indirectly. What's more, it's an important piece of validation for astronomers, says University of Wisconsin-Milwaukee physics professor and gravitational wave co-author Jolien Creighton. "It's completely consistent with the electromagnetic observation," he says. "It verifies that there’s not something grossly wrong with our distance calibrations and electromagnetic astronomy." There's still a bit of uncertainty in their numbers at the moment though, based on the fact that they're still not quite sure exactly how the spinning neutron stars were angled with respect to Earth. Binary mergers that face us, as opposed to appearing edge-on, yield stronger signals, so locking that down would help to reduce the margin of error in their calculations. Creighton hopes that with further analysis of the data, they can refine their predictions. The era of gravitational wave astronomy has only just begun, after all.