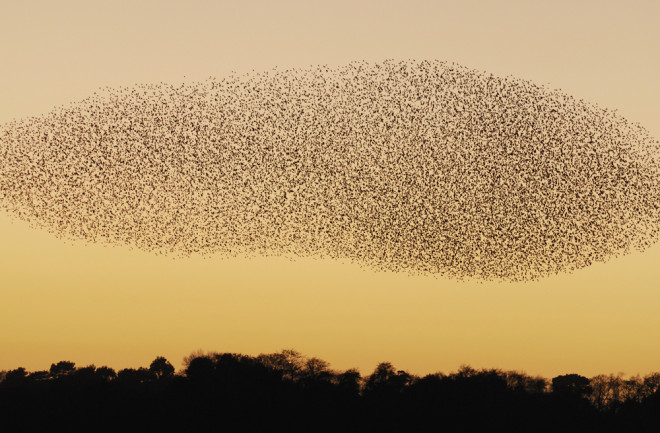 Birds in a flock, darting and swooping in synchrony, display skillful precision in their collective motion. Now a group of physicists has coaxed flocking behavior out of a completely lifeless system — a collection of tiny brass rods and spherical beads on a vibrating plate.

Researchers from the Indian Institute of Science in Bangalore had studied the physics of such rods for years. They focused their efforts on producing flocking after taking inspiration from research on locusts, which align in flocks only when crammed together above a certain density.

A single layer of millimeter-size, tapered, brass rods aligns spontaneously on a vibrating surface amid a background of aluminium beads. The plate’s flower shape helped perpetuate the flow of the rods among the beads, revealing the underlying physics. (Credit: Ajay Sood/Indian Institute of Science)

The same phenomenon, the researchers thought, might be observable with the rods. The millimeter-size rods are tapered at one end to make them “walk” in a preferred direction; like a bird or a locust, they tend not to move backward.

When the group vibrated only rods, they observed short-lived hints of flocks. But the results changed dramatically when graduate student Nitin Kumar added some beads to the mix. Kumar scattered beads and rods in a single layer on a plate that vibrated 200 times a second, and he watched in surprise as the rods began to neatly assemble, circulating endlessly.

The group constructed a computer simulation of their experiments to help reveal the underlying physics. Unlike birds or locusts, which use sight or smell to interact, the rods instead communicate through the beads. “The beads became their eyes and ears,” says physicist Ajay Sood. Each reorienting rod drags beads behind it, altering their flow. Other rods align themselves to that flow, like a weather vane in the wind.

The scientists hope the results can shed light on other flocking behaviors, including the collective motions of cells in wound healing and cancer, and human stampedes in crowded venues.