The Gamma-Ray Large Area Space Telescope, or GLAST, arrived safely at NASA's Kennedy Space Center today, and is being prepped for launch. It'll head into Earth orbit on a Delta-II rocket, and the launch is set for May 16th at 11:45 a.m. Eastern time. 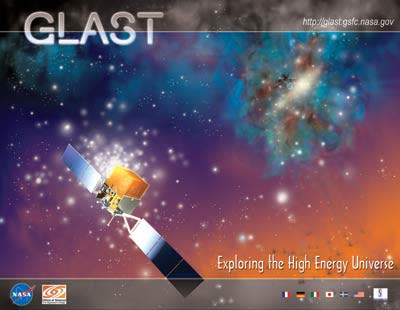 I'm excited about this; I worked on GLAST education for six years, and I know what this machine can do. The images it provides of gamma-ray sources in the sky won't look like Hubble pictures, but they very well may revolutionize how we understand the high-energy Universe. Black holes and gamma-ray bursts are its primary targets, but it will also detect pulsars, the Sun (solar flares can generate gamma rays) and maybe, just maybe, dark matter -- there are some weird ideas that dark matter particles generate gamma rays when they annihilate each other. That's really speculative, but GLAST will help put some numbers to the idea at the very least. Remember, the deadline to rename GLAST is March 31! Get those names sent in.