Giant Volcano on Jupiter’s Moon Could Erupt Any Second 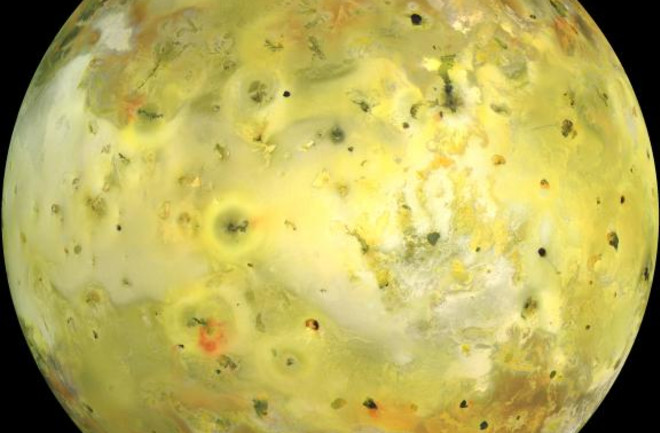 A true color approximation of Jupiter’s moon Io taken by the Galileo spacecraft in 1999. (Credit: PIRL/University of Arizona)

A volcano spread across an area greater than Lake Michigan could erupt any day. Located on Jupiter’s moon Io scientists predict that Loki, named after the Norse trickster god, is due to explode sometime in mid-September. The volcano last erupted in May 2018, an event also predicted by scientists.

“Loki volcano is huge — 200 kilometers across. It’s large enough that it would completely take out southern California if it were on Earth,” said Julie Rathbun, a scientist at the Planetary Science Institute in Tucson, Arizona. She presented the prediction in a poster at the European Planetary Science Congress-Division for Planetary Sciences meeting in Geneva on September 17.

“It is also a different kind of volcano.  …The lavas on Io are much thinner and runnier, more like lavas in Hawaii and they don’t build tall mountains.  Instead, you can think of Loki more like a giant hole in the ground filled with molten lava.”

An image of the Loki volcano on Jupiter’s moon Io taken by the Voyager 1 spacecraft in 1979. The dark area near the bottom is a lava lake. (Credit: NASA/JPL)

A lava-filled pool in a volcano’s crater is technically called a lava lake. We have them on Earth as well: An active volcano with a lava lake, Erta Ale, exists in Ethiopia. The eruptions from lava lakes aren’t explosive in the manner of a quintessential volcano. Instead, these eruptions occur when the lake’s cooled crust breaks open and releases the hot lava underneath. In some instances, bubbles or fountains can periodically burst up from the surface of the molten lava, or giant waves can sweep across the lake’s surface. Data from 2015 found two such waves traveled the lake at a leisurely one to two kilometers a day.

Scientists have monitored Loki since the 1990s. They watch for periodic changes in the infrared brightness of the volcano to see when it’s erupting. The enormous size of the volcano, some 125 miles across, makes it more predictable than most. In the past few years, Loki has erupted every 475 days, though when it was first monitored, the cycle was closer to 540 days.

“The eruption schedule might change if the time it takes for the solid crust on the surface to sink changes, and this could be due to changes in the density of the lava,” Rathbun said.

The eruptions on Loki only reveal about 0.5 percent of the surface of the lava lake at a time, but given Loki’s enormous size, the effect is still visible from Earth. While the exposed bits of lava can’t be resolved from the ground, scientists can see the increase in brightness in the infrared data. As Io’s largest volcano, Loki’s eruptions show up ten to a hundred times brighter than other volcanic activity on the moon.

Loki is just one of over 400 volcanoes on Io, the most geologically active planetary body in the solar system. The intense volcanic activity is caused by Jupiter, which squeezes and churns Io’s interior in a process known as tidal heating.

“Io is constantly giving us new scientific surprises and things that really help us understand the Earth a lot better,” said Jani Radebaugh, a planetary scientist at Brigham Young University, in Provo, Utah, who was not involved in the new research. “It really also helps us understand the early Earth, when the heat output was so much higher, like it is on Io today because of Jupiter tugging on it.”